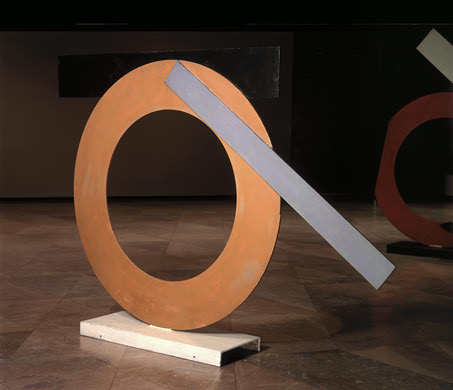 Circles crop up all the time in art, as catch-all symbols for things like union, wholeness and cyclicality. It was the circle that the sculptor David Smith (1906 – 1965) selected as the sole compositional focus for his works of the early 60s. His Circles I, II and III at the NGA are related: all dated 1962, they’re made of painted steel and each weigh 500 pounds. And yet, they stand alone too, differentiated by color, interior diameter size and by those geometric shapes welded to their sides.

Smith is seen as America’s greatest modern sculptor. The son of an engineer, he started out as a welder and riveter at an automobile plant in Indiana. He went to New York to train as a painter in the mid 1920s, but turned to sculpture in the 1930s after seeing Picasso’s and Julio Gonzalez’s metal structural pieces. In 1934 he set up a studio at Terminal Iron Works, a machinist shop in Brooklyn, where he started fusing the materials and methods of mechanical trade into his art. 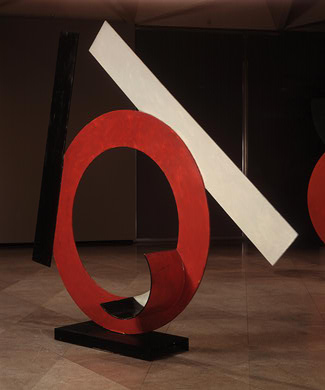 It’s undoubtedly Smith’s brash and breezy approach to material (machine parts, scrap metal, found objects) that sets him apart as an artist. In the case of the Circles, you’re never far from the facets of the steel he’s shaped and shaved. I think the material bore crucial connotations for this man, who worked during World War II as a welder of tanks and locomotives in a defense plant. Smith said in 1952, “what associations it (steel) possesses are those of this century: power, structure, movement, progress, suspension, destruction, brutality.” Smith’s subtle brilliance shines in the marrying of his modern, American, industrial materials with a gentle, painterly touch. So in the case of the Circles, their polychromed surfaces are visibly tickled by the traces of the artist’s brush.

In 1940 Smith found an ideal setting for his artistic endeavors, at Bolton Landing in the Adirondack Mountains, upstate New York. I think that the space and freedom he accessed there catapulted his creativity into a whole new sphere. Suddenly, from the late 1950s, his sculptures became increasingly monumental. The room to maneuver also unleashed more compositional choice, and he’d spend hours arranging and photographing his works in the fields around his studio. He probably intended the NGA Circles as a kind of triptych from the outset, and when seen together as he stipulated, their concentric placing launches the works into strong bonds of visual and (possible) symbolic associations. 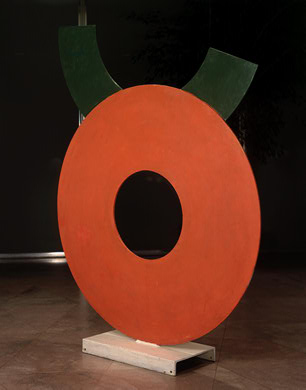 The flat planes of the Circles are each enlivened by geometric elements, joined at dynamic angles. These attached bars and curves of steel link Smith to the aesthetic developments of leading European avant-garde artists. These reaching-out elements also define Smith’s idea of “drawing in space”, since the works are planar and yet exist in three dimensions. Many of Smith’s sculptures are actually intended to stay and be seen outdoors, where they’re enhanced by the effect of light on their polished or painted surfaces.

I think Smith’s Circles are symbolically connected with the harmony and wholeness he saw in the landscape at Bolton Landing. But I think the works might also reference ideas about the passage of time and life’s regeneration. If the Circles are indeed alluding to the cyclicality of life, then Smith is striking right at the heart of intimate human concerns. The speediness of the circle of life is one of our most pressing preoccupations, something we can all identity with. It’s this idea that’s currently being captured, movingly, in a TV ad for the UK department store John Lewis. Just see if you can keep a tear from your eye while watching this.