We’re back with Katy Perry today, who’s fast becoming a regular fixture on this blog (see April 8). On Monday, Katy attended the Costume Institute Gala Benefit at the Metropolitan Museum of Art in New York. The event raises funds for the museum and is well-known for its parade of daring fashion displays by attendees. At first, as Perry scaled the steps to the entrance of the Met, it looked like she’d decided on demure: pretty in a floor-length, pale pink and white confection, it seemed that for once she was playing it safe. But then, when the lights went down and her dress lit up, it was clear she’d be stealing the show after all.

Her dress was by a London fashion company called CuteCircuit, who specialize in wearable technology. In this case, designers Francesca Rosella and Ryan Genz had used super small full-color LEDs, which are flat as paper, measure 2mm in length, and consume a minimal amount of electricity. The circuits were thin and flexible, hand-embroidered onto a layer of silk to allow them to stretch. The controls for the lights were located inside Katy’s bra.

Pictures of Perry glowing bright white on the red carpet brought to mind this mesmerizing portrait at the NGA. It’s called Symphony in White, No. 1: The White Girl (1862) and is by the painter James McNeill Whistler (1834 – 1903). Whistler was American-born, but spent his life as an expatriate, mostly in London and occasionally in France. He’s famed for his night scenes and full-length portraits like this one, which shows his mistress Joanna Hiffernan. 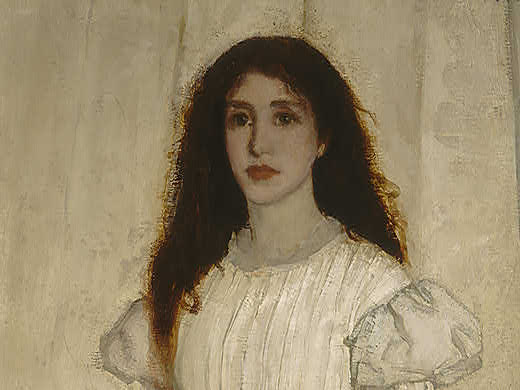 Symphony in White radiates Whistler’s allegiance to the Aestheticism, which emerged in England and America in the second half of the 19th century. Whistler stuck to the movement’s central tenet, which said that subject-matter in art was less important than evoking palpable experience, atmosphere or mood. This Symphony starts to show us how he aimed to espouse this “art for art’s sake” ideal. See how he limits the color palette to various, modulated whites and touches of blue and beige along the bottom. While he adds just enough tonal contrast to the dress and backdrop (suggesting volume, shape and fold), he keeps his forms fairly flat, in order to emphasize their abstract design and ‘surface’ pattern. He goes for a blended, harmonious effect, with color, shape and composition contributing to the whole. 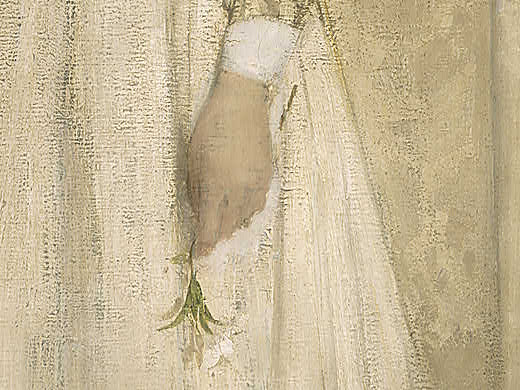 Whistler’s stylistic style took people by surprise: when this work showed at the Salon des Refusés in 1863, it was met with scorn and derision. Only some artists and critics sided with Whistler (one writer on the Gazette des Beax-Arts even inadvertently named the work, when he wrote about it as a “symphony in white”).

This portrait is not about capturing reality (notice the skewed perspective in the room) or even an exact likeness of the mistress. Interestingly, if there’s any level of precision to report, it’s in the way Whistler casts the dress she’s wearing. His portraits of women often showcase an interest in female fashions and somehow here, without being fastidious or overly fussy, he catches the cut, color and feel of the fabric, through soft layering of paint and delicate brushstrokes. For me, she’s translucent in a way that far outstrips even Perry in her luminous LED number. Though, when Perry said she’d chosen her dress to represent people “who do their own thing” and “have their own bit of spontaneity and self-confidence,” I couldn’t help but think of Whistler’s courageous cry for creative modernism. 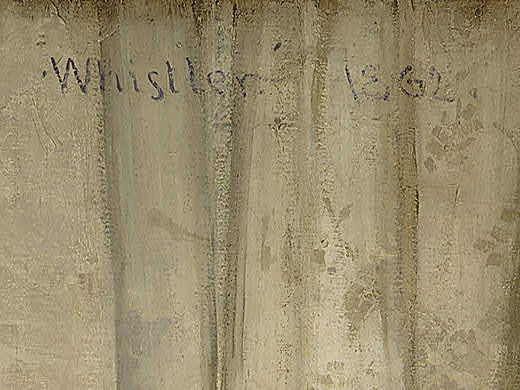 One thought on “All White on the Night”