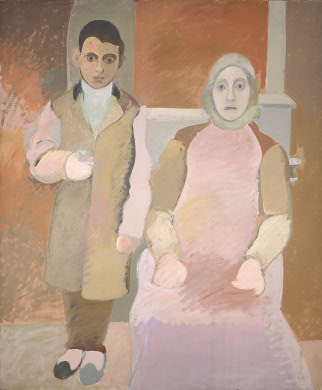 It’s Mother’s Day in the United States, the well-heeded annual holiday that recognizes mothers, motherhood and maternal bonds. We’re with Arshile Gorky (1904 – 1948) today, and looking at his painting The Artist and His Mother (c. 1926 – c. 1942). And I’ll warn you now: this is harrowing, non-Hallmark card stuff. This video gives a moving account of how this artwork came about.

Born Vosdanig Manoog Adoian in Armenia, Gorky had an idyllic childhood that was crushed in 1915 when the Turks invaded his homeland and initiated the Armenian Genocide. The persecution of the Armenian population of the Ottoman Empire that took place during and just after World War I resulted in one to one-and-a-half million Armenians being killed. Gorky’s father had fled earlier to America, but he and his mother and sister lived for a time as refugees in Russian-occupied territory. That’s where in 1919 Gorky’s mother died of starvation. A year later Gorky joined his relatives in the US and changed his name, taking Arshile from the Greek hero Achilles and Gorky (“bitter one” in Russian) from left-wing author Maxim Gorky. In the early 1920s he attended the New School of Design in Boston and by 1926 he’d moved to New York, where he started teaching painting, meeting avant-garde artists and exhibiting at the Museum of Modern Art. 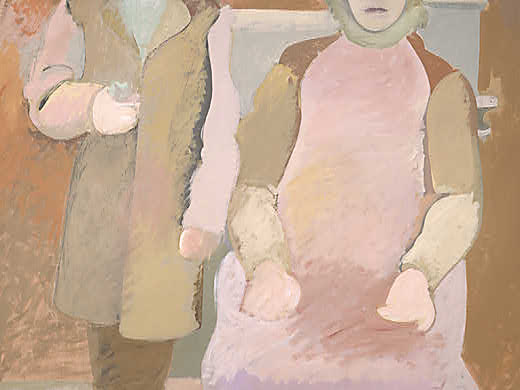 The Artist and His Mother is probably Gorky’s most famous painting. It’s based on a photograph taken in 1912, the only image that exists of the artist’s early life. What can one say about a work like this, so deeply riven with the tug and tragedy of life? The dating itself is interesting: from 1926 to 1942 Gorky religiously re-worked the painting, seeking to sculpt an almost sacred image worthy of the memory of his mother.

The style is also rather revealing. In the 1920s and 30s Gorky looked a little like Cézanne, Kandinsky and Picasso, but by the 1940s, he’d evolved a distinctive ‘look’ of his own. That’s when, influenced by Surrealism, he began painting in a free, arbitrary manner, setting dream-like doodlings against a background of melting colors. The NGA’s One Year at Milkweed (1944) is a good example of the style he eventually settled on, which provided a link between European Surrealism and American Abstract Expressionism, and is style we most associate with Gorky today. 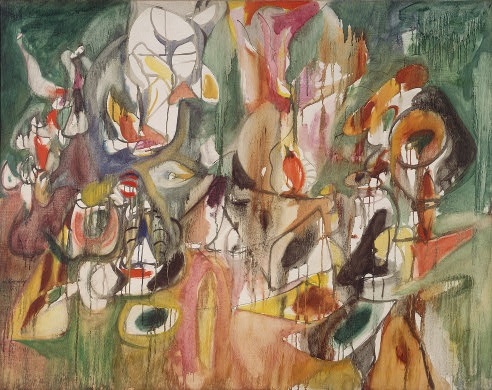 But Gorky’s latter-day delight in ‘paint for paint’s sake’ was not what shaped his image of his mother. So much more than a replica of a photograph, this is a stand-apart in his oeuvre, from the bleached, peached palette to the shaky strokes patching up the bodies. I’m moved by the poignant detail of his mismatched shoes and both their odd, stump-like hands. Mostly it’s the face of his mother that’s haunts, big-eyed, beautiful and questioning, yet oh so shockingly ashen. 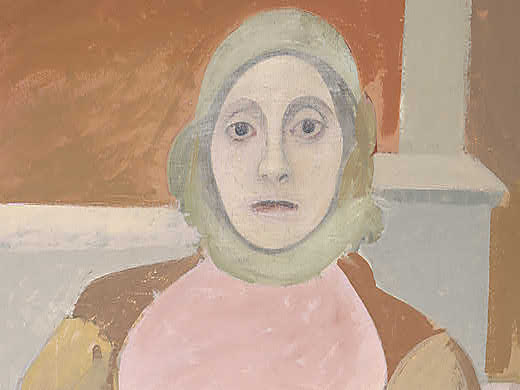 Gorky came to the US aged 16, and the impact of the geographical and cultural chasm he faced was great. Just as tragedy defined his early years, it trudged along beside him to the end: in 1946 a fire in his Connecticut studio burned more than 30 of his works, and the same year he was diagnosed with cancer. Two years later he broke his neck in a car crash, and not long after committed suicide.

And yet Gorky, like his mother, survives to this day, in paintings that reverberate with vitality. As an artist he revisited the rural scenes of his homeland, finding reprieve and rest that way. So too this image of his mother, which saved her from oblivion, seems to have given the artist solace and support. 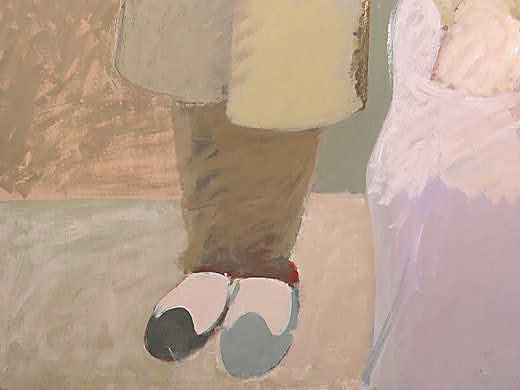