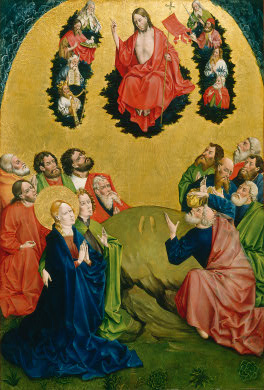 According to accounts in the Gospel of Luke and the Acts of the Apostles, Jesus appeared to his disciples during the 40 days following his resurrection. On the 40th day, he came to lead them to the Mount of Olives, where he instructed them to wait in Jerusalem for the promise of the Holy Spirit. Then, as they were watching, he rose up and ascended into the clouds. As the disciples stayed staring, two angels appeared and declared that, just as he ascended, Jesus would return in glory.

It’s Ascension today, one of the earliest feasts celebrated by the church, possibly originating with the Apostles. In this final stanza of a religious sonnet called La Corona by the English poet John Donne (c. 1572 – 1631), we get some sense of the awe associated with ascension:

Salute the last and everlasting day,

Joy at th’ uprising of this Sun, and Son,

Ye whose true tears, or tribulation

Behold, the Highest, parting hence away,

Lightens the dark clouds, which He treads upon;

Nor doth He by ascending show alone,

But first He, and He first enters the way.

O strong Ram, which hast batter’d heaven for me!

Mild Lamb, which with Thy Blood hast mark’d the path!

Bright Torch, which shinest, that I the way may see!

O, with Thy own Blood quench Thy own just wrath;

And if Thy Holy Spirit my Muse did raise,

Deign at my hands this crown of prayer and praise.

Our painting is by a German painter called Johann Koerbecke (c. 1420 – 1491), and shows Donne’s magical moment in physical form. We know relatively little about this artist, save that he may have studied with his father Hinrick, or with another local artist in the 1430s. Johann is first documented in 1443, purchasing his father’s house in the northwestern city of Münster. He spent his life in the town, cited in documents as “Johannes Koerbecke, de meler” and receiving commissions for several altarpieces. The NGA’s panel was once part of the high altar of a church in Münster: originally there were wings on either side, painted front and back, which folded open from the center. When the shutters were open, eight scenes (including the NGA’s painting) told the story of Mary’s life. 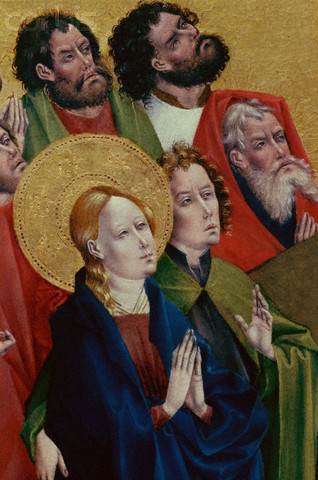 Mary is quickly apparent here: she’s the only one with a halo and wears a striking blue mantle. As well as the twelve disciples gathered on the ground around the Virgin, there are eight Old Testament characters clustered around the risen Christ, who either predicted or foreshadowed events of his life on earth. This work is interesting in as much as it bridges two separate styles. The rich gold background (which has been pounced with a point for decorative indentations), jewel-bright colors and compact (slightly awkward) space all let us know of the lingering traces of the International Gothic style. This style – prevalent in Europe from c. 1375 – c. 1425 – was characterized by its sinewy elegance and use of gold. However, this strand sits alongside an incisive verve for visual observation, which heralds the naturalism of the Renaissance, and lends veracity here. The shaded folds of the drapery start to suggest the bodies beneath. The faces of the apostles reveal a heck of a lot of human emotion and are licked into life with the tiniest of brushstrokes, so that the features fizzle with the effects of real-life observation. It’s all about making this miracle believable, which brings me to my closing question: why the two feet-like forms on the Mount of Olives, do you think?