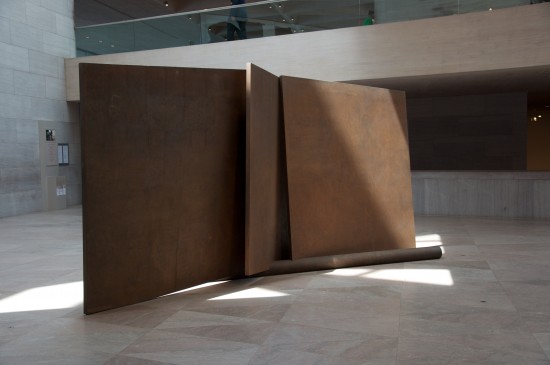 On Wednesday this week it was announced that the US sculptor Richard Serra (b. 1939) will be receiving Spain’s prestigious Prince of Asturias award. The Foundation (named after Spain’s Crown Prince Felipe), hands out eight awards annually in categories that include literature, sports and scientific research, in an autumn ceremony in the northern city of Oviedo. The prizes include $60,000 and a sculpture by the Spanish artist Joan Miro. There are two sculptures by Serra at the NGA, and one of them, called Five Plates, Two Poles (1971), is up for our discussion today.

Serra is a Minimalist sculptor, working in a style we most associate with American artists of the 1960s and 1970s. Minimalism makes use of basic, simple forms and geometric shapes, often on a large and imposing scale. A combination of simplicity and size are designed to draw attention to the space around a work, as well as make the spectator engage with the art as a real object, rather than as an image of something else.

Five Plates, two Poles is an eloquent example of an object standing only for itself, and well-apart from the history of sculpture as a carved, modeled, cast, or constructed object sitting on a pedestal or base. Made of hot rolled steel, it also shows Serra’s strong invocation of the worlds of industry and factory: it’s sometimes suggested that his early experiences working in industrial mills shaped his choice of materials such as steel, concrete and lead. 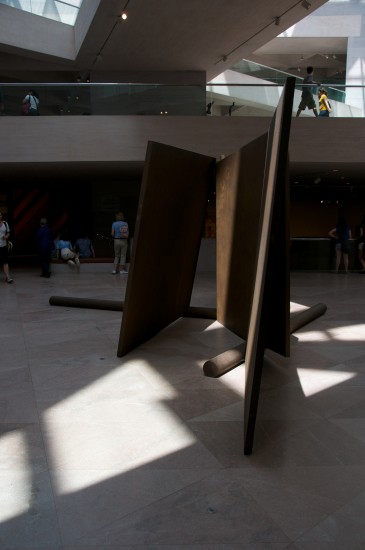 It was in the late 60s that Serra’s sculptures started offering viewers an intense encounter with properties of weight, mass, gravity, balance, and duration. Five Plates, Two Poles is the largest and most complex of seven “plate and pole” pieces that he made between 1970 and 1971: it’s made up of five eight-foot square standing steel plates that are partly supported by slotted steel poles. The elements rest directly on the ground and (here’s the best bit) are not welded together: instead, they’re held erect and in place by the force and counterforce of the leaning plates. This sense of forces in tension is an essential element of Serra’s sculpture from this period: the effect is rather like a house of cards, precarious yet held in perfect balance. Serra has gone on to address the core concerns he initiated in this sculpture throughout his career. 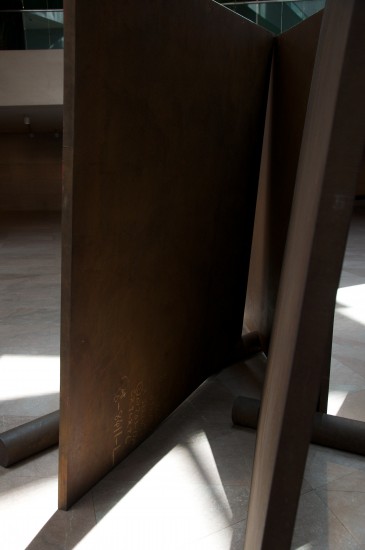 Walking around the work, you see and sense a sequence of shifting planar and spatial relationships in the configuration of the plates. The scale and weight of the materials adds to the awe of the encounter and you’re never far from the authentic character of the material – there are markings on the surface of the steel that pulled me back to its intrinsic properties. Sometimes Serra is labeled a “Process” artist, in as much as the form and feel of his sculptures are derived purely and simply from the way they are made. 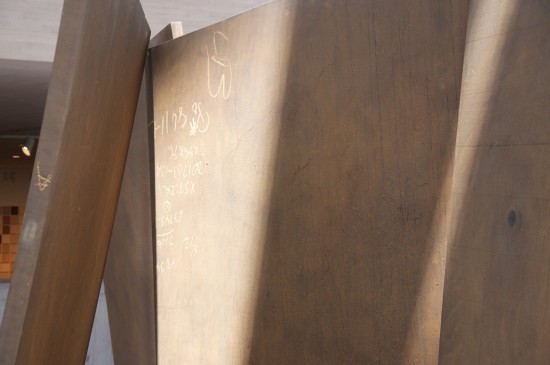 The Prince of Asturias Foundation described Serra this week as one of the “most relevant sculptors of the second half of the 20th century” and said his works were of “great visual power that are an invitation to reflection and wonder.” Serra said simply, “I am very honored to be the recipient of the Prince of Asturias Award.” This photo shows him smiling before his monumental installation Promenade at the Grand Palais in Paris, France. Made of five steel plates 17m x 4m and each weighing 75 tons, Serra says it makes for a “radical, poetic landscape of steel, minimalist yet full of movement.” 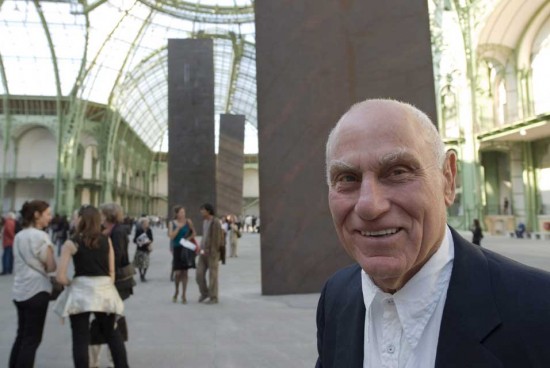