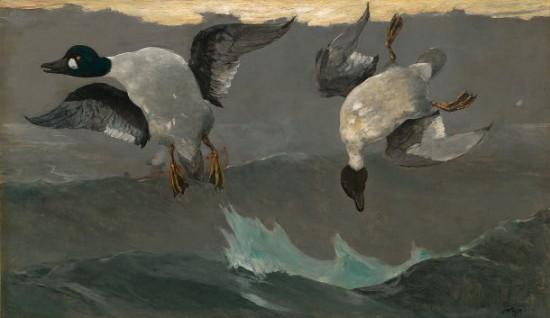 The American animal rights organization PETA (People for the Ethical Treatment of Animals) recently revealed a new iPhone application. Called Be Nice to Bunnies, it lists thousands of cruelty-free products and companies, so that shoppers can stop buying personal-care and household products that have been tested on animals.

PETA are promoting the app with the help of Stephanie Pratt (star of the MTV ‘reality show’ The Hills). Pratt was prepared to bare her buns for the Be Nice to Bunnies cover, but since the original nude shot was deemed too risqué for Apple’s iTunes Store, PETA pulled together a clothed version as well. Speaking of her reasons for joining the ranks of celebrities who have bared all for PETA, Pratt said: “Guinea pigs and rats and bunnies … [are] blinded, poisoned, and burned for such a useless experiment that’s not needed.” 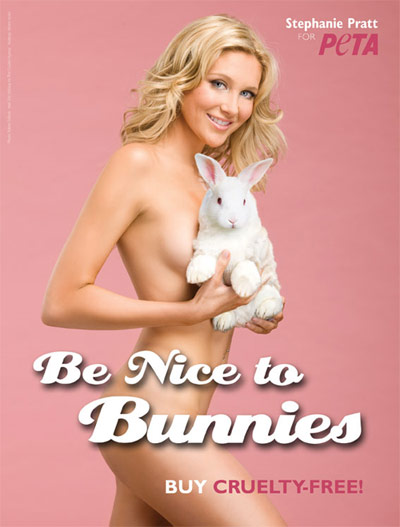 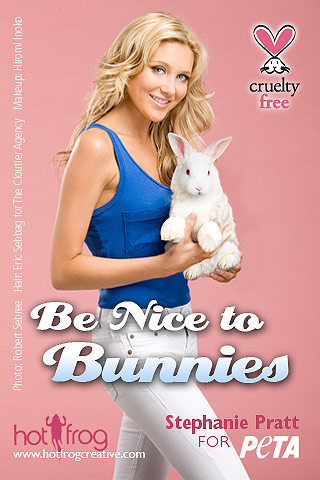 Whatever we might think about the screen stars that peel off layers for PETA, one thing is certain: these campaigns alert us to the animals’ point of view. And that’s the thing that pulled me to this painting, Right and Left (1909), at the NGA, by the American artist Winslow Homer (1836 – 1910). Homer came to art late, and received little formal training. Having worked initially for a Boston lithographer and as an artist-correspondent on the Front, it was a trip to France that exposed him to progressive trends in European art and, like other artists from all over the world, he was invigorated by Realism and Impressionism. Once home, Homer evolved a powerful and original style, recognizable for its superb brushwork, emotional intensity and hint of modernist abstraction.

Homer produced some of the most iconic images of 19th-century American life and for me some of his best works (including Right and Left) explore the struggle between man and nature. In some ways, this painting can be seen as a pinnacle of achievement in the artist’s career. The title was actually provided by a viewer (with hunting experience) at the work’s first public showing, and refers to the act of shooting ducks one after the other with the separate barrels of a shotgun. 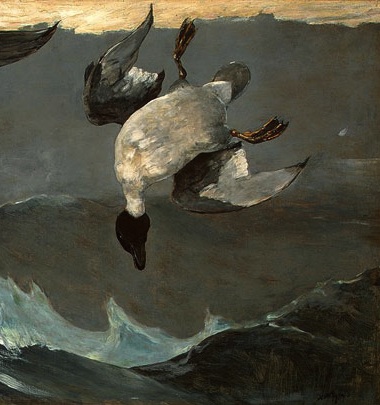 The thing that’s instantly arresting here (and the reason I chose this for today’s blog) is that we are a witness to this scene not from the hunter’s boat, but rather from the elevated vantage point of the animals. This unusual, airborne angle acts as an instant prompt to empathy with the preyed-upon creatures. This is our front-row seat at a theater of threat: it’s been suggested that the downward head, flopped feet and diving direction of the duck on the right tell us he’s the one that’s just been hit. The other is flapping for freedom from the second shot just now fired (as seen in the hot-red flash and puff of smoke just visible in the middle left part of the picture). Yet, on the other hand, the diving duck might be executing an effective escape maneuver, while the stiff pose the left duck could connote he’s the one that’s been blasted.

In any case this painting underscores the fragile and fleeting nature of the ducks’ existence. And in fact, therein lies the broader meaning too: painted only one year before Homer’s own death, this work seems also to address more generally the transience of human life. Certainly, the ambiguity of the birds’ poses comes to illustrate the stickiness and trickiness of the transition between life and death. And what with its purposeful colour palette and whipped up, blatant brushwork, this particular painting campaign is very hard to ignore. 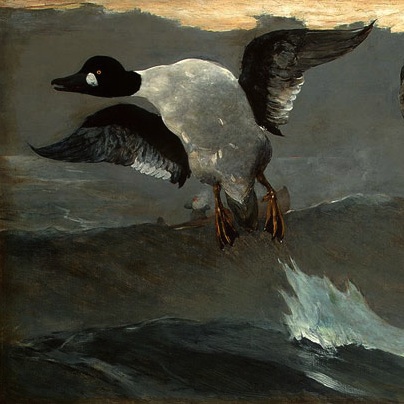