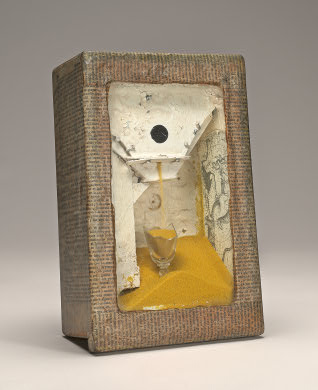 I recently came across a video of Kseniya Simonova, a Ukrainian sand artist. Beguiling to see, she scatters and shapes sand across a light box, as if painting with the particles. See here for the performance that won her Ukraine’s take on America’s Got Talent, in which she uses sand to interpret Germany’s occupation of her country during World War II. Be prepared though, to feel shocked, somber and staggered after seeing this.

Simonova’s sand work pointed me in the direction of Sand Fountain (1948) by Joseph Cornell at the National Gallery of Art. An American, Cornell (1903 – 1972) is best-known now for pioneering Assemblage art, which uses 3D found objects to create works. Assemblage art was only properly established in the 1950s, when the name was coined, but nonetheless its roots dig deeper, to the mid 1930s, when Cornell came up with his first assemblage pieces. Primarily an urban art form, Assemblage sprang up in New York, Cornell’s native city (indeed, apart from five years spent at Phillips Academy in Andover, he lived his whole life there, in a working-class part of Queens).

Boxed assemblages like the one we’re looking at today formed a large part of Cornell’s reputation and success as an artist over the decades (he produced his first example in the in 1930s). These works see Cornell move far and wide from the traditional genres of painting and sculpture, to create hybrid 3D forms of gathered-together discarded objects and scrap materials, in boxes. Sand Fountain (1948) does a lot to lay bare the bones of Cornell’s peculiar practice. 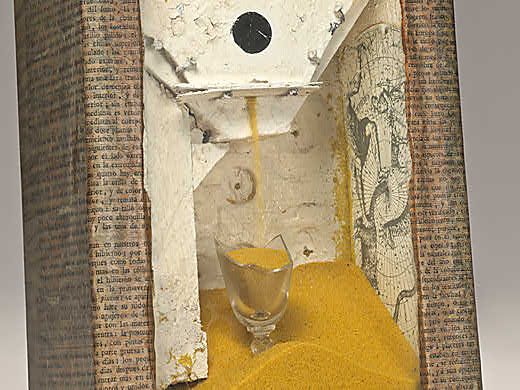 You’ll see that this box is plastered over the outside and edges with light-salmon newspaper. Inside one side is pasted with some sort of geographical map with lines and coordinates: collage like this loomed large in early Assemblage art. Peering beyond the glass panel slotted across the front of the box, we observe an odd cluster of things. There’s a funnel-like form coming down from the top (it’s painted with cracked and peeling white paint and marked with a pitch-black dot). Out from under a little lip trickles a thin ribbon of sand, color ochre, into the sharp-edged, shattered remains of a (champagne?) glass. The sand has overflowed throughout the base of the box, duning against the sides and pushing up against the pane.

Cornell’s eclectic fusion of found things recalls Surrealism, a style that lived on in New York into the 1940s, and which exerted influence on all the genres he worked in. While Cornell didn’t espouse the Surrealists’ ethos of uncovering the unconscious through art, there does seem to be some tapping into a deeper level of meaning here.

The objects he’s used for Sand Fountain sit somewhere between junk and abandoned and broken sometime-treasures. There’s an ‘everyday’ element to the things we see (sand, a glass, strips of newspaper), which lends a certain notion of nostalgia. But alongside the recognizable bits and pieces pries an unsettling sense of breakage, interruption and loss. In a plain way, Cornell might be highlighting the wastefulness of society (certainly, he was an important influence on Pop Art of the 1960s, which was all about analyzing aspects of consumerism). But surely there’s more to be uncovered here? Even though it wasn’t until the 1960s and 1970s that Assemblage art started to ‘comment’ openly on social issues, I can’t help but peruse the possible readings here. I’m seeing an hourglass and an attendant concern with time and transience. What do other people see?

One thought on “Sand Storm”