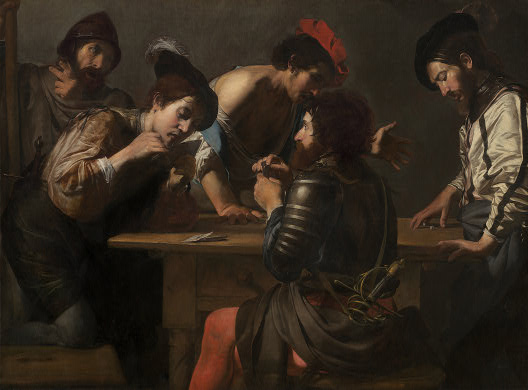 Chatroulette is our latest internet phenomenon, a social networking site that connects you via webcam to strangers from across the world. Fans say it’s addictive (Ashton Kutcher, Kate Moss and Kelly Osbourne are among the high-profile users), but critics says it’s obscene. I should stress I’ve never been on Chatroulette and nor do I intend to try it, but it’s easy to get a sense of it from the sidelines. A mix of Twitter and Skype, it was started last year by Andrew Ternovski, a 17-year old from Moscow. It now gets 1.5 million visitors a day and has made such a splash that US universities are already giving seminars on it.

The big Chatroulette conundrum: is it a harmless window onto human behavior or potentially-dangerous voyeurism? What started out as a way to connect with new people in far-flung places has slyly snowballed into something else entirely. Encounters can be creative and humorous, but also X-rated and downright disturbing. The problem stems from the fact that the site shuns social networking safeguards: unlike Facebook, you don’t need to register or be someone’s “friend” to interact with them. 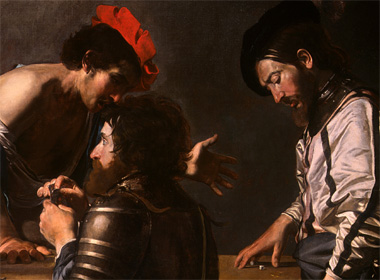 Unchecked, Chatroulette has rolled away from it’s initial, more innocent intentions. To me, the site looks like social gambling: as you shuffle through a deck of potential partners, you risk the things the wheel will throw your way. It’s this gambling theme I’ve gone with today, in Soldiers Playing Cards and Dice (c. 1620) by Valentin de Boulogne (c. 1591 – 1632). A Frenchman born into a family of artists, Valentin adopted the name of his birthplace. He travelled to Rome between 1611 and 1620, where all aspiring, ambitious European artists went at the start of the 17th century. Valentin carved a successful career in Italy, with scenes of contemporary life, religious subjects, allegories, and portraits.

This work shows how far Valentin fell under the spell of one Roman artist in particular: although Caravaggio had died in 1610, his powerful, direct style continued to hold sway in the city for decades after. Even the subject here is indebted to the earlier master, who’d started the trend for painting card-playing scenes.

Valentin’s narrative is gripping and edged with danger, since this sort of game was illegal. He spins his story with a band of roughly-hewn men, mercenary soldiers, dressed in a haphazard way to display their idle, errant and erratic ways in life (see how they’ve scraped together arbitrary pieces of armor to wear). We’re meant to read the mean-spirited ruse that’s unravelling: a young man studies his cards, but he’s inexperienced and doesn’t see what’s going on around him. His pink silk shirt, laced and ribboned, and the softness of his skin mark him out as a prime prey for the other players. 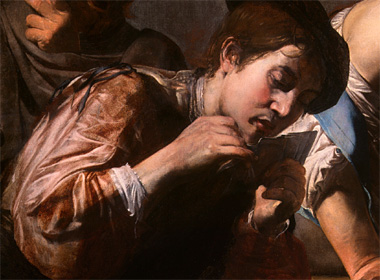 Opposite sits the bearded cheat, with a hard stare that hides the fact he’s reading the gesture of his accomplice behind the young man’s back. To the right two men play at dice: one gestures while the other looks down. 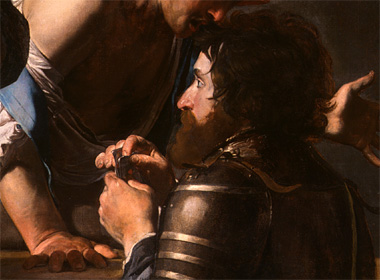 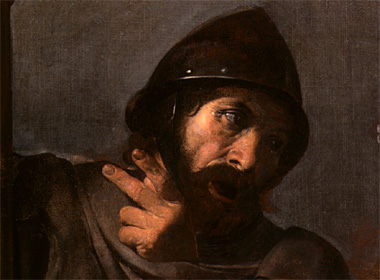 Valentin’s figures are unflinchingly real: dirt and sweat-smeared and cloaked in the stress of Roman street life. The way he paints (thinly, with rapid brushstrokes and no underdrawing) adds to the sense of spontaneity. It seems the artist himself was steeped in the seamier side of the city: he died at the age of 41 when he caught a chill from falling into a fountain during a night of carousing. 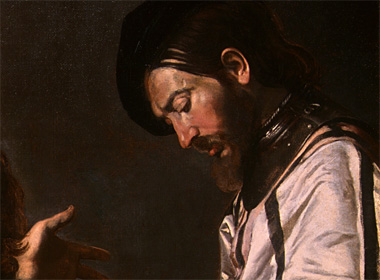 2 thoughts on “Playing it Safe?”