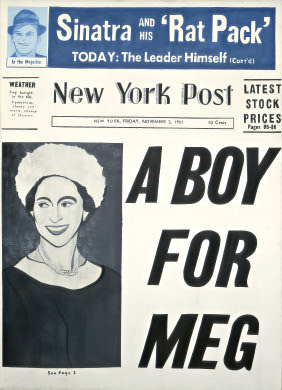 Exit Through the Gift Shop is a documentary directed by graffiti artist Banksy: it catches never-before-seen street-artists on camera and trails one man as he makes millions from art in a matter of months. It’s been a total sensation (not least for the fact that there’s big buzz it’s all a hoax, hand-crafted by Banksy himself): check out a tantalizing taste here.

Banksy is the world’s most renowned (though still-anonymous) street artist, and surely a key figure in 21st-century art, a totem for the turning-point in the role of an artist and his operations. His stuff, with its sense of subversion and dribbling disdain (whether that’s at himself, his buyers or the art world at large) calls to my mind Andy Warhol’s A Boy for Meg (1962) at the NGA. Like Banksy in our times, Warhol’s output pivoted around upturning art’s apple cart and mocking mildly an old establishment as he embraced popular culture, the mass media and celebrity.

Born Andrew Warhola to Czech immigrant parents, Warhol (1928 – 1987) worked as a commercial artist in the 1950s before becoming a Pop Art pioneer in 1961 (with his first artwork Campbell’s Soup Cans 200). Around the same time, he started making paintings of comic strips and newspapers, such as we see in our painting today. Instantly, this sort of seemingly straight-forward depiction of a banal bit of paper from daily life set him well-apart from the heavily worked, heaving-with-emotions surfaces of abstract expressionist artists, also operating at the time. 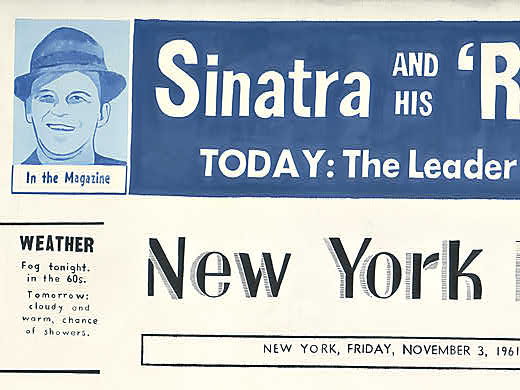 A Boy for Meg is an intriguing early work from Warhol, and catches him not deploying his now-distinctive visual language of modern advertising, with garish colors, simplified forms and repetition. Here he starts out with a front page of the New York Post: he’s literally lifted the appearance of the ready-made text and images off his source page and replicated them wholesale onto the surface of his canvas. The effect is odd and unexpected: the mass-produced nature of the subject and the unremarkable treatment of the visual elements (flat strokes in black, blue and white oil, hardly any detail anywhere), detract from the “painted-by-hand” sensibility.

Of course Warhol’s foci here are the tabloid’s dramatic headline and that smiling photo, blaring about the birth of Princess Margaret’s son. He’s exposing his era’s obsession with celebrities (whether royal or popular), their lives and their glamor in a work that preempts the silkscreened depictions of icons he started later the same year. Within the schematized, squared-off format of the paper sit sinister ideas of the easy, please-y access and instant gratification we still see so much of today. 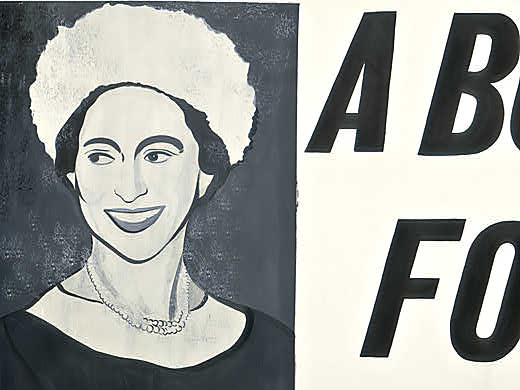 Aside from the initially out-there alienness of Warhol’s imagery, he was among the first to turn “art” into a kind of enterprise, adopting mechanical printing processes to allow rapid reproduction of (almost) identical images. In addition, he took steps to remove traces of the artist’s involvement, getting assistants to execute his ideas and not signing his works. He also gave art the sheen of must-have-cash, saying in 1975: “making money is art, and working is art, and good business is the best art.” This monetary fixation flashes throughout the Bansky film.

Of course, the big thing that separates Warhol from Banksy is the fact that he was in-your-face famous, whereas no-one even knows what Banksy’s face looks like. While one devoted time and skill to rabidly raising his visibility, the other seeks always to remain ‘invisible’, his facelessness perhaps the most alluring thing about him. So isn’t it interesting that both of these totally opposite tacks have secured skyrocket status for each?