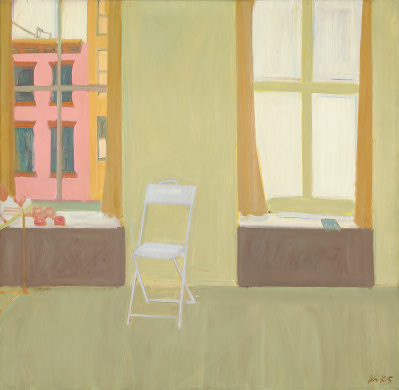 News from across the pond is that a fresh-painted portrait of Anna Wintour, Editor-in-Chief of American Vogue, is now on show at London’s National Portrait Gallery. Completed in 2009, it’s by the US artist Alex Katz and shows Wintour from the shoulders up, looking dead-on into our lens. She’s set against a yellow background (a departure for Katz), in a light blue turtle neck and wearing a turquoise necklace. The biggest nota bene is that this picture prized Anna’s signature sunglasses off her nose: the ice-queen-editor is seldom seen without her ocular safeguards set in place, so those painted, purply peepers are an unusual exposure. The decision to paint Anne sans sunglasses came after Katz saw her in The September Issue (the documentary on the making of Vogue’s biggest-ever issue) and noticed she had “lovely eyes”. Wintour visited the artist in his NY studio, where he worked on studies from life for the final painting. It was the first time she’d sat like that, and by all accounts she seems to have settled into the experience: “I couldn’t think of a nicer way to spend the afternoon. We talked for two hours while he worked, and I was pleased to see that he used a lot of color, which I adore.” 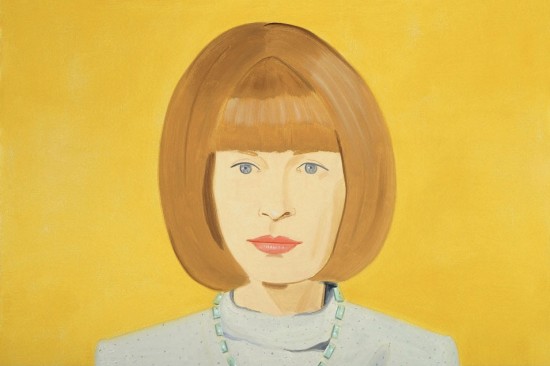 Born in born New York in 1927, Katz studied there and in Maine from 1946 – 1950, during which time he was influenced by Abstract Expressionism. In the 50s however he painted a series of portraits of friends and family for which he developed a figurative style, with flat color planes and simplified forms. This style stuck and became his hallmark: it’s often associated with Pop Art (on account of its bright colors, simplified shapes and glossed gleam), but in fact Katz predates that. He was outside the mainstream of modern art for years until he got critical success in the 80s, when his impersonal atmospheres and smooth finishes suddenly zapped into the zeitgeist. 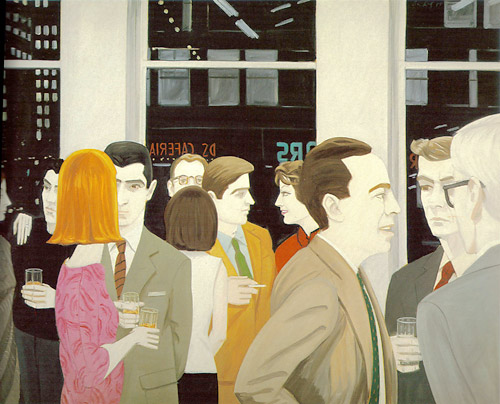 Katz is best-known as a painter of people who he finds at the center of his cultural life (friends, family, his wife and life-long muse Ada), but the NGA has a different kind of picture. Their Folding Chair (1959) shows how Katz clung to observation and carved out a sort of ‘modern realism’ that reconciles representation with abstraction. This picture is eked to its essentials in color and form, and has a warped-out perspective that opens it right up. On the one hand there are traces of a photographic aesthetic but on the other, the brush strokes and palette (olive, orange, peach and bleached tones here) point to painterliness.

I’m not sure I’m taken in by this painting, or by Katz’s oeuvre at large. I see it’s ‘interesting’, in as much as it blurs boundaries between abstraction and realism, and the areas of color are enjoyable enough. Even the ‘snapshot’ feel, created by cropping the scene at the sides, is kind of cunning. But frankly I find this picture a little plain and listless, lacking in (dare I say it?) a ‘point’ of interest.

Katz is called ‘one of the most significant artists of his generation’ in the NPG press release for his new show, and they wouldn’t say it if they didn’t believe it. But could it be that just sometimes his distant, dispassionate images must muster more interest for the famous, glamorous, beauteous people they represent, rather than for the particular ways in which they’re painted? Katz called painting Anna “like shooting a fish in a barrel.” And now I suppose I see what he means.