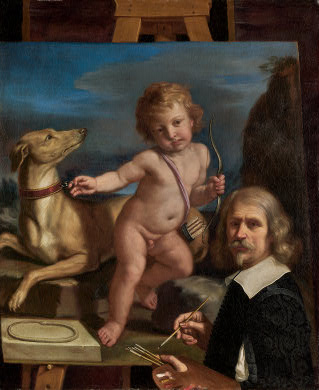 Big tick to Nike for putting on a show of such class-A creepiness that Elin Nordgren had no trouble tapping that last nail into the coffin of her beleaguered marriage. Have you seen that troubling TV ad where her husband Tiger Woods stares emptily into the camera lens / our living rooms while the voice of his father addresses him from beyond the grave? Smacking of self-pity and lacking even an iota of taste, the ad makes Tiger look like a naughty boy receiving a wrap on the knuckles for his bad behaviour. Need a reminder? See here.

I was more-than-a-little surprised to find a painting with a similar sort of approach and message at the NGA. It’s called Self-Portrait before a Painting of “Amor Fedele” (1655) and it’s by an Italian artist, Giovanni Francesco Barbieri, who’s known by his nickname Guercino (“the squinter”, after a visual ailment he had). Born in Cento (Emilia-Romagna), near the artistic centres Bologna and Ferrara, Guercino (1591 – 1666) was apprenticed at 16 to local painters. But despite this (as he himself said) he was largely self-taught, and looked at other artists to hone his own distinctive style that was rich and painterly, with naturalistic figures and bold tonal modeling. Guercino’s work carries characteristics of the Baroque, which prevailed in the 17th century, and which was keen on dynamic movement, emotional intensity and theatrical effects.

Guercino ended up spending most of his life in his native north Italy where he enjoyed a steady stream of important commissions, but he also had a brief period (1621 – 1623) in Rome. While there, he worked for Pope Gregory XV and for Gregory’s nephew Cardinal Ludovico Ludovisi, for whom he painted an exuberant cycle of ceiling frescoes (perhaps his most famous work) that included this image of Aurora. 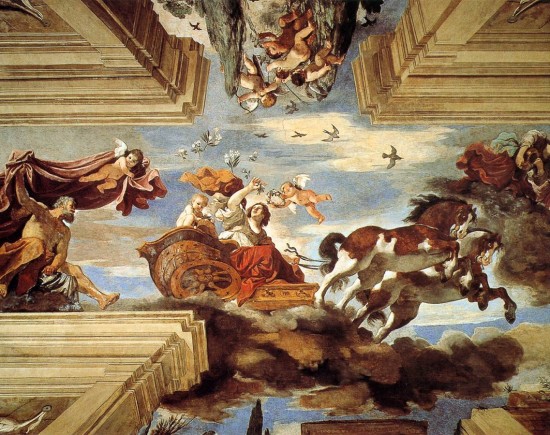 Our Self-Portrait before a Painting of “Amor Fedele” is a much later work and sees the squinter damp down the exuberance of his teens and twenties in favor of a calmer, more classicizing manner. On the right stands the man himself, hair scraped sideways over pate, and palette and six brushes in hands, seeming as if he’s about to daub pigment onto the large canvas behind him. The picture he’s in front of sits on an easel and shows an amassed and unmistakable collection of signs of fidelity: there’s Cupid (quiver and bow) the little god of love, who’s hooked his finger through the collar of a dog (much-used emblem of faith and loyalty). Beyond these there’s a snake seen eating it’s own tail, which could be a sign of unity and wholeness.

Certain things make the image look refined and serene: the down-to-earth naturalism of the babe’s body, with soft shading shaping the flesh and facial features. The colors help to lighten the mood, especially that jewel blue of the sky and the red and pink pops in other places. And instead of any energetic posing, we’re firmly fixed by the steady stares of the artist and Cupid, both achingly asking us to ‘get what we’re saying’ about him being faithful. If I’m honest it makes for a rather odd picture, unsettling in its beseeching intensity, and it’s this that reminded me of Tiger’s own earnest eye-lock with the camera in his ad. Guercino seems to have been a devoted family man who always painted close to home, so I’m not sure what may have prompted this work. Perhaps he too had things on his mind. But while Tiger’s ad scrapes the bottom of the barrel of base taste, this picture at least leaves us some dignity and beauty, wouldn’t you say?