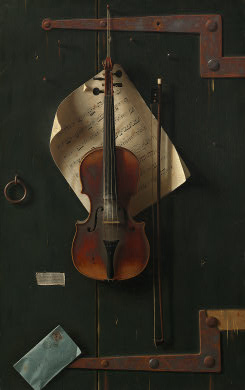 I’m befuddled by a fiddle: 12 luthiers (makers of stringed instruments) in Markneukirchen, Germany are busy building what they hope will be the world’s largest (playable) violin. The town has a long tradition of musical instrument-making that stretches back 350 years, but no one’s ever attempted this: the would-be world record breaker will be 14 feet tall and will weigh 200 pounds plus. Now they just need a giant to play it. 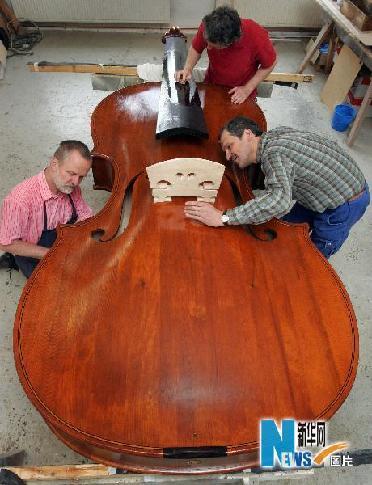 I thought we’d play out this tune and look at The Old Violin (1886) by William Michael Harnett (1848 – 1892). Born in Ireland, Harnett was raised in Philadelphia in his working class family. As a teen he trained as an engraver, which led to classes at the Pennsylvania Academy of Fine Arts from 1866 and a stint studying in New York from 1869. In the 1880s he passed six years in Europe, perusing old master still-life paintings, preparing to make his mark on the genre back home. He did this this by ditching the typical tabletop (orienting his images upright instead), and priming painstaking trompe l’oeil (‘fool the eye’) tricks. 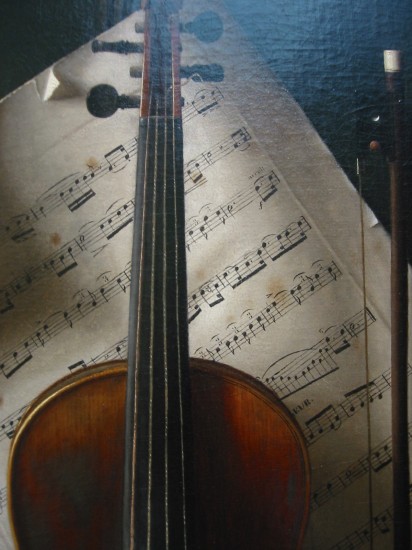 The Old Violin is Harnett’s masterpiece, which starts with a simple arrangement: a violin hangs squarely suspended on a battered green door. Glowing sheets of music appear behind, reading two well-known melodies, and there’s a piece of snipped newspaper and an envelope bottom left. This work bewitched viewers from the off: “A painting has been added to the Art Gallery, which has created a furore,” read one Cincinnati newspaper. “Visitors will need no guide, they will find it by following the crowd,” said another. Viewers would literally reach to grasp and grip the objects, unsure if they were painted or not. 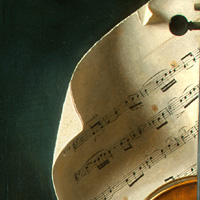 So how did Harnett harness his visual trickery? Well, he starts with a shallow space, key in keeping our eyes on his objects (the door defines the entire space). Layering is important too, so he’s got the violin and bow on top of the sheets, shadows and all, as if bursting beyond the logical limit. Things ripple and crinkle: he’d foreshortened the envelope and the edge of the clipping, shading deftly all the way. He’s even cut off the corner of the envelope, as if it’s been stuck into the frame, toying with the impression it’s the only real object here. 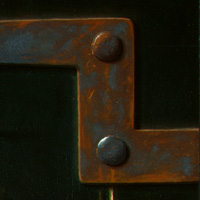 Harnett also applied some serious sorcery in terms of technique: on the hinges for instance he first added sand or coarse pigment to brown paint for an rough under-layer, before moving a dry brush tickled with orange paint over the surface. For the clipping, he painted slender blocks of thin black paint over a white background and while it was still wet he scratched at it with a fine point to trace lines in it. This let through the under-layer and created a ‘typeface’ that looks real but is in fact illegible. 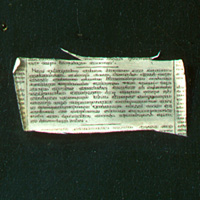 But quite aside from the visual vexing this is also a work of multi-layered meaning, bringing in the tensions between old and new, the everlasting and the fleeting, illusion and reality. At the core of all these meanings ticks the transience of time, which Harnett highlights in the fair wear-and-tear of his objects.

This work helped Harnett position himself as the most famous still-life painter of the last quarter of the 19th century, but it does raise one question in my mind. See how he’s signed his name on the envelope? Why, after using such time-consuming tactics to fool his public, did he want to write in his identity in such an obvious and legible way? 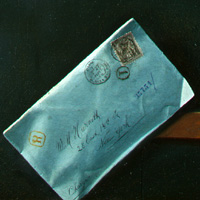