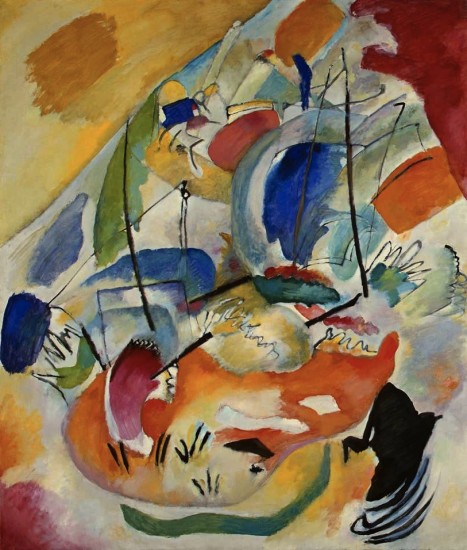 It’s too soon to be optimistic said Obama during his most recent trip to the oil-hit Gulf of Mexico coast. As the disaster deepens (beaches in the tourist area of northwest Florida just saw the first sure signs of oil), I’m turning to Sea Battle at the NGA. Not because there are grounds for any level of literal comparison, but rather because this picture’s ripping sense of rupture and effluence evoke the natural and political fall-out from the spill.

Wassily Kandinsky (1866 – 1944) was an abstract art pioneer. Born in Moscow, it was seeing a Monet masterpiece aged 29 that made him move to Munich. There he began Der Blaue Reiter (The Blue Rider) in 1911, a group of Expressionist artists clustered around the creed that creativity was inert in academic art and that an artist had a spiritual mission.

The Blue Rider trotted towards abstraction in art, but the trek was treacherous indeed. You see, art without a subject was an utterly revolutionary proposal at the time. Sure, in the first decade of the 20th century, Fauves and Expressionists had liberated color, Cubists had split objects into multiple planes and Futurists had challenged concepts of time. But for all this flattening of frontiers, until 1910 artists had stuck to a subject, however hard to identify. 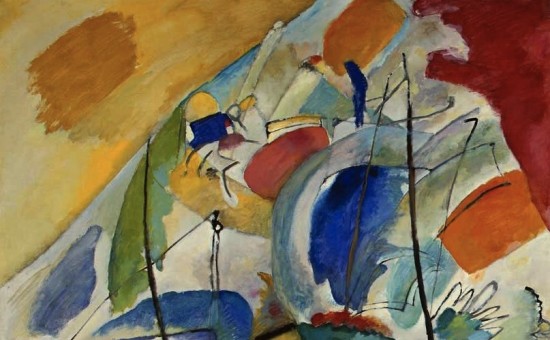 The lyrical, mystical, color-shot canvas of Improvisation 31, Sea Battle (1913) hard-leans into abstraction and lays Kandinsky’s claim to being the first non-representational painter. But even here, what might at first glance appear formless and free is in fact more manicured than that (prep work for a painting like this might take months). The main motif is a pair of battling sail ships, tall masts as slim black lines, cannons blasting while waves roll under-keel. At the upper left stand the tall towers of an about-to-topple city.

The core clatter at the center spins into a radiation of forms and lines out to the edges. A dagger-like diagonal fractures the picture’s left and right sides. The artist saw acute angles as comforting and warm (occurring abundantly in nature), so these are seen as yellow and blue. On the other hand, he reckoned right angles to be a cold man-made contrivances (never naturally in evidence in nature) and accordingly painted these in crimson. 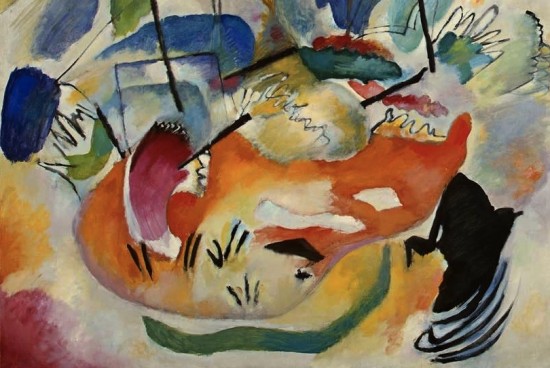 Let’s look now at possible meaning in this inventory of ‘images’, because these jagged lines and jostling color forms are invested with incredible apocalyptic charge. They suggest collapse and turmoil (note how the sides are flatter and calmer). The rise and plummet in the mashed medley of shape, color and line suggest things subsumed by fierce, far-beyond forces. Sea Battle is dated around the eve of World War I, and though it doesn’t allude to a specific war (according to the artist), he did say he sought to visualize “a terrible struggle … going on in the spiritual atmosphere” here.

Sea Battle stands as the start-point for a kind of abstraction concerned with emotion, by an artist who felt fervently that man trod at the threshold of a new spiritual era, and that art should serve to sever human attachment to the material world. This is the thing that cajoled Kandinsky’s leap of faith into the abyss of total abstraction (though this picture tells us how elusive that last leap really was). He said “Abstract art places a new world, which on the surface has nothing to do with reality, next to the real world.” So perhaps my initial comparison wasn’t too out-there, after all.