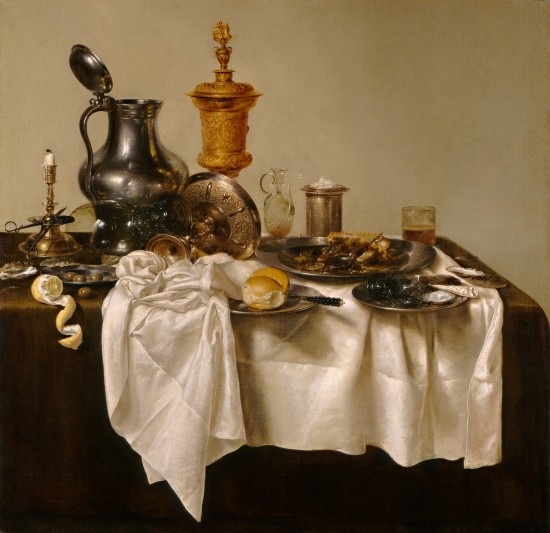 Sometimes our food habits seem as fickle and faddish as the fashion industry: the latest super-berry, the best anti-something veggie, the hot new vital vittles are all-in one season, all-axed the next. And while we’re better at bandying about key consumption concepts like fair trade, food miles, organic, sustainable, we’re still seduced by ritzy new restaurants and  catchy new cookbooks doing fussy fusion food. The biggest and baddest contradiction in our culinary terms is that we worry about things depleting while all the while producing mountains of gleaming black bin bags at the back of the house.

Food waste is the seething, slimy monster that must be man-handled at home. Top of the most-shocking stats: food flicked into the trash in Europe and the US could feed the world three times over. British households alone discard enough edible stuff to fill Wembley Stadium (their biggest soccer arena) to bursting, eight times a year. Can you believe that more than a quarter of that comes served in its original packaging? A whopping one in every three bags we drag back from the market ends up in the bin: imagine what that can cost a person in a lifetime!

This Banquet Piece with Mince Pie (1635) has long been a favorite of mine at the NGA and, though it was painted at a time when waste was an issue for other reasons, it’s well-matched to our debate today. This is the largest-known painting by the artist by Willem Claesz Heda (c. 1594 – 1680) a master of Dutch 17th-century still-life painting, who brought to tradition to his native Haarlem. 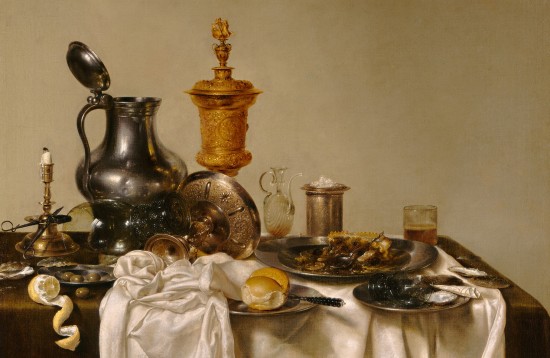 This picture is typical of Heda’s monochrome manner (in 1620s – 1640s) in setting up this sort of scene, with its series of subdued, close, tonal harmonies. Here he pulls together a prize podium of of golds, silvers and bronzes, all put against a plain, neutral background (softly illuminated) and a creamy tablecloth (artfully crumpled). 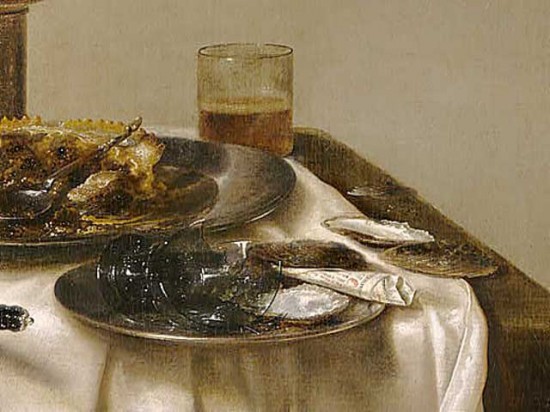 It’s clear here the other thing the artist is concerned with is rendering different textures (an obsession he shared with most Dutch still-life painters of the time). He’s got a dull sheen on that pewter dish, high gloss on the silver knick-knacks and a sharp gleam on the glassware. It’s all looks uncannily real, touchable, eatable. And in fact therein lies the trick of the pic: what at first appears as an extended invitation to some sumptuous feast, is in fact a resonant reminder of the transience of human life and achievements. Platters and knives teeter at the drop-off to the floor. Goblets have already clattered and shattered, as has that food-stand. An obvious symbol of the brevity of life is the snuffed candle seen to the left, and the mauled main dish (Heda’s special, a mincemeat pie) tells us that all things, eventually, decay.

Heda’s pleasure-filled painting is an ode to the fleeting life and was not intended as a comment on waste. But, to our eyes in our times, those left-to-linger foods should set alarms bells ringing! There are some simple solutions we all can adopt to make sure we munch through all the food in the fridge: if it leads to less landfill, that means less methane, which is better for world, all round.

I’ll end with the lemon, with its curling peel: in Heda’s case it’s an emblem of deception (beautiful to behold but sour to the taste). But I’ll take it as a lesson for our trashy times, that things half-finished shouldn’t be binned, but turned into must-eat treats instead.