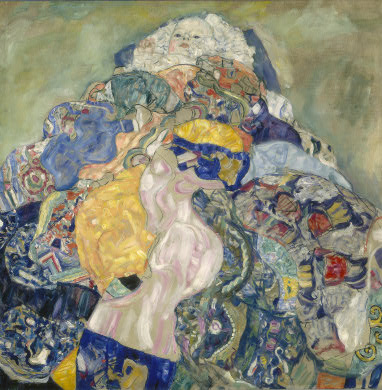 One bouncing new arrival at the spring box-office has been Babies, a buoyant, fun-filled film documentary by Thomas Balmès. Following the first year in the lives of four infants from different parts of the world (Mongolia, Namibia, San Francisco and Tokyo), the trailer alone has been making people coo for months:

The stars (Ponijao from Namibia, Mari from Tokyo, Hattie from the US and Bayarjargal – the lone male – from Mongolia) were all cast while still in-belly. We meet the babes at birth and sit ring-side as they major milestone their way through their first 12 months (sitting, crawling, walking and more). It’s the simplest ‘first breath to first steps’ plot synopsis. Balmès certainly sweetens the pill of parenthood: reviews reckon there’s not one single truly ‘tricky’ moment sticky-ing up the screen. Instead, from those four corners comes an airbrushed, immaculate image of babyhood, filled to the gills with the ‘aww’ factor. For Art 2010, Babies is well past its due date and I’m happy the film finally popped out: I’d been looking for a link-in to this precious painting by the Austrian artist Gustav Klimt (1862 – 1918). 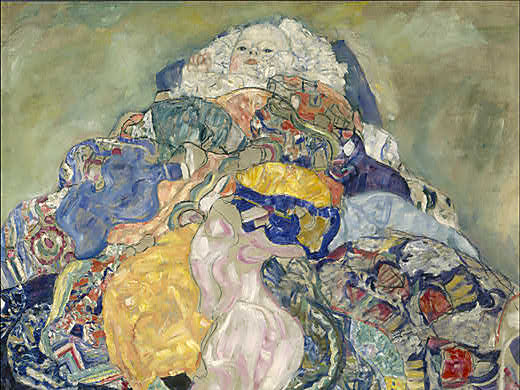 Let’s look first at the man behind the pic. Klimt’s modernist credentials colored his career: he was a founder of the Vienna Secession (1898), a group of artists that resigned from established academic bodies and exhibiting societies to thrust forward the aims of various modern movements. He was also a principal Jugendstil (Art Nouveau) painter in his time, adopting the patterns of whipping organic forms that hallmarked that Euro-American movement of the 1890s. He’s famed for his portraits of beautiful, wealthy women and for frank, realistic renderings of nudity (which often caught him up in controversy). His most renowned work is (of course) The Kiss: is there a more-lauded image of sensual love in the Western canon? 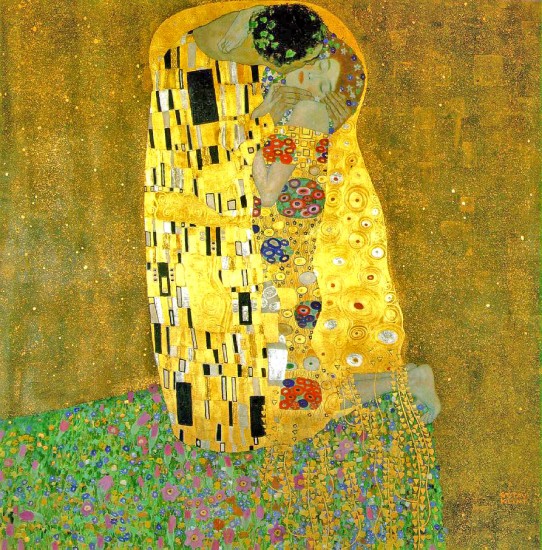 Let’s bring it back to our Baby (Cradle) now, which dates to the very end of Klimt’s life (1917/18) and showcases a late version of his highly distinctive, visually rich style. Coming in loud and clear are his ‘decorator’ credentials: he’d studied decorative arts as a student and later in life (1883 – 1892) shared a studio for decorative painting with his brother and another artist. In fact, Klimt achieved his most consistent successes in applied arts (for example, mosaics). 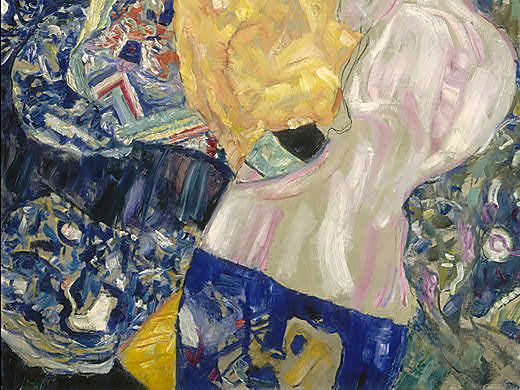 There’s a jumbled mountain of material swaddling the baby: it dominates the space and commands the eye. The surface is all riddled with patterns rendered in luscious lively lines. Ornamental motifs (spirals, swirls, squares, rounds, dots, dentils) move to abstraction while the bold colors (deep blues, mauves, greens and magnolias) elaborate and luxuriate with each other. It’s all brought about with emboldened brush-moves: this is the thing that’s rocking the baby, the cradle that’s moving from side to side. 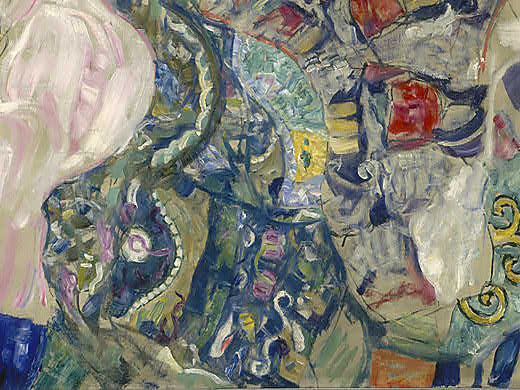 And yet still, the viewer’s eye is drawn to that small face sitting atop the mountain, with its tender and open expression. It’s an unconventional composition: a soaring pyramid with a head propped on top. What’s astonishing is that though so little of the baby is visible, we’re still left with a lasting impression of his newness and vulnerability. So, far from being lost in the embrace of the swathes, we seek him out in his joyous bundle.

At the end of his life, Klimt caught this earliest stage of humanity on canvas, which brings me back to the Balmès film. The director has said that one of the main things he looked for in the families he’d follow was that children, once born, would be totally loved. Did Klimt set out to convey that same, encircling sense of adoration here, do you think? 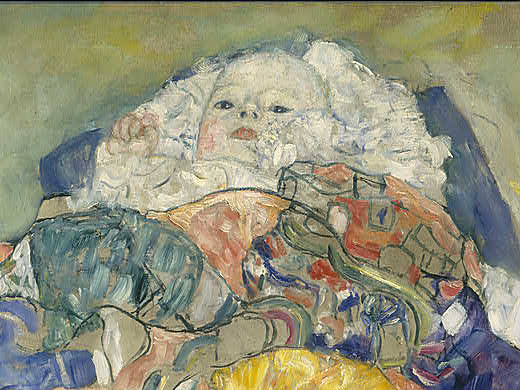