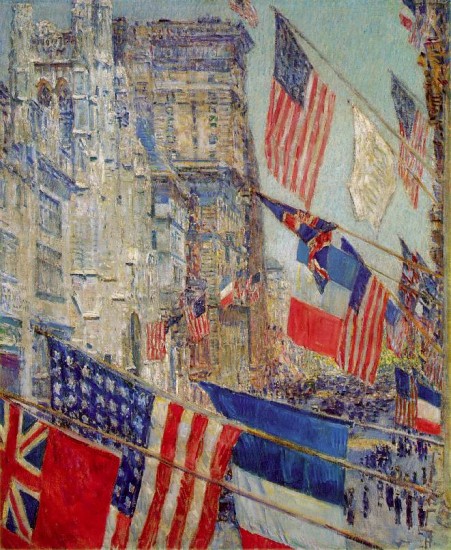 It’s Flag Day here today, which I needed to look into. Commemorating the adoption of the flag of the US in 1777, it seems a set and serious celebration: in 1916 President Woodrow Wilson proclaimed June 14 as Flag Day, and in 1949 an Act of Congress sealed the deal. 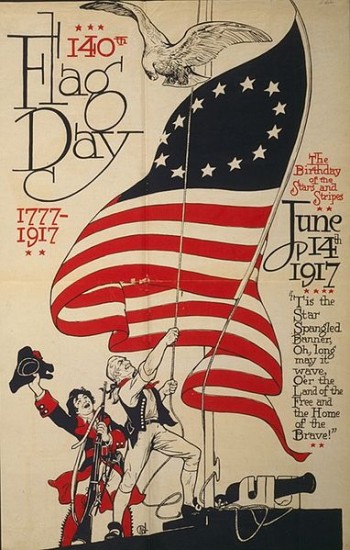 One of the things that caught my eye when I first came to this country was the proud proliferation of so many flags. As we threw open the windows of our San Francisco hotel room, myriad roofs, decks, spikes and spires all showed the flip-flap of the star-spangled banner. The meaning of the markings is familiar to me now: 13 horizontal bands of alternating red and white refer to the 13 colonies that rebelled against the British monarchy. The blue rectangle in the canton, with its 50 small white five-pointed stars, stands for the 50 states. So it’s part history, part unity, with just as a dash of grit and aggression thrown in. A good combination, as flags go. 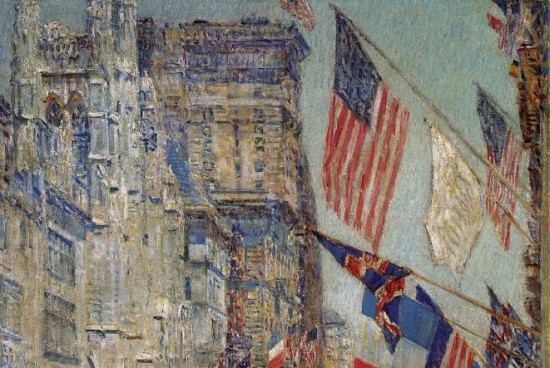 Ever since finding out about Flag Day, I’d saved this painting specifically (in fact I think it might have been Husband who scouted it out). It’s called Allies Day, May 1917 (1917) and is by the American painter Childe Hassam (1859 – 1935). The first impression (aside from the flags, with their festive flood of red, white and blue) is surely of Impressionism, and that’s spot on: Hassam fell head over heels for the look and feel of the style during a three-year stay (from 1886) in Paris.

Once back in the States, Hassam settled in New York, and the city became the backdrop for his street scenes (portraying urban life in the 1890s) and (later) his series of flag paintings. The NGA’s Allies Day captures a spine-tingling moment, as mid-town Manhattan is bedecked with billowing flags upon America’s entry into the Great War in the early part of 1917. It’s Fifth Avenue that has Hassam’s eye, and we can see why: the British Union Jack, the French Tricolor, and Stars and Stripes together stitch a stunning patchwork of across the sky and street (temporarily renamed “the Avenue of the Allies”). This is one of the parades that honored America’s allies in the war and in fact this painting itself became part of that celebration, as the artist dedicated it to “the coming together of [our] three peoples in the fight for democracy.” 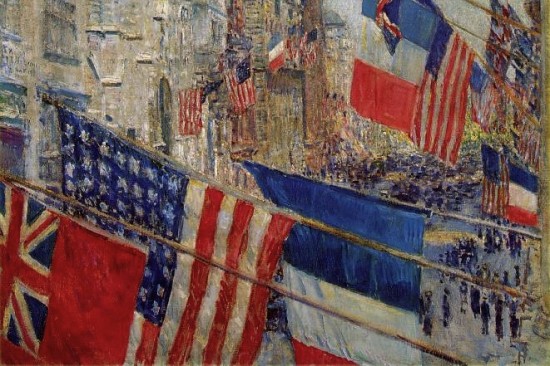 Doesn’t this painting recall that teeming street scene we looked at by the Impressionist Pissarro? Hassam follows his French Impressionist forebears by choosing a nice high vantage point from which to survey the scene. With that he achieves a good overview, as well as a nice line in dramatic spatial recession (spot the milling in the middle-distance).

Hassam was among the first American Impressionists, central in bringing the movement to the US. The things putting him in the Impressionist corner here are the bright colors (so much the essence of this scene, where national unities are underscored by the saturated reds, whites and blues); the broken brushwork; the modern theme (in true Impressionist fashion, this shot is a snap-shot, a flicker of a moment in time). But there’s a difference in the quality of the brush: it’s less daubed and dissolving than we’d see in a Monet, so overall, Hassam’s look lingers more solid.

This pretty, punchy picture was shown in New York in November 1918, just days after the armistice was declared. A fact that surely unfurls some of the true, deep meaning of a flag.

One thought on “Flying the Flag”