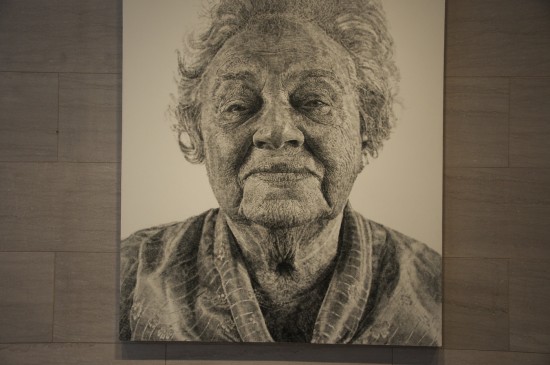 The night her mother Debbie died of cancer this year, British teenager Sarah Phillips picked up her mobile phone and sang into it a home-made tribute. The song, later set to a string of family videos, became an internet sensation with hundreds of thousands of hits, raising more than £100,000 for charity and lending a benchmark to grip on for a family in grief. Four weeks after Debbie died, Sarah entered the iTunes chart with her eye-pricking and visceral version of Paolo Nutini’s song Autumn.

The song and sequences (particularly the mosaic motif used at the end) brought to mind this mural-size portrait at the NGA: Fanny/Fingerpainting (1985) is by the American artist Chuck Close (b. 1940). As a student at Yale in the 1960s, Close was bitten by the Abstract Expressionist bug, then raging rampant across New York City canvases. A few years on though, Close distanced himself from the style, starting to stem the flow-in-favor of its wild and willful workings. His approach? To reduce the power and the presence of the BS (brush-stroke).

Supperrealism is the style that Close had settled on by 1967 (the name was coined in the mid 60s): flourishing in the US in that decade and the next, Supperrealism took an infinitesimal approach to painting, slowing it down, sharpening it up. Fanny/Fingerpainting (a portrait of the artist’s grandmother-in-law) will talk us through the fine-print. Close works from photos (Supperrealists seek mostly to mimic the mimetic quality of photography), so this would have started as a black and white snapshot. Next he draws a grid onto his canvas to start copying the image, scaling it up, square by square. 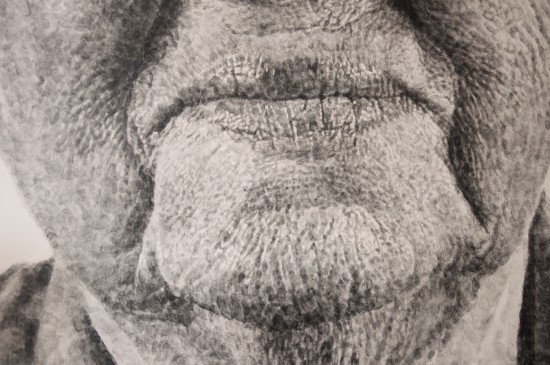 In this case, we’re met with an experimental technique Close created in the mid 80s: inking his fingers, he imprinted them onto the surface. Simple in essence, though this is a far cry from the pre-school school of finger-painting. By controlling the amount of paint daubed and by playing with the pressure applied, Close achieves rich tonal range. It’s frankly unnerving, this level of precision: stand back and you’d swear this is a plus-size photo, detailing every dip, crease and crevice on an old woman’s face. But then, step close and the thing dissolves before your eyes into a blurry blotched swell of tiny tadpole-like marks. 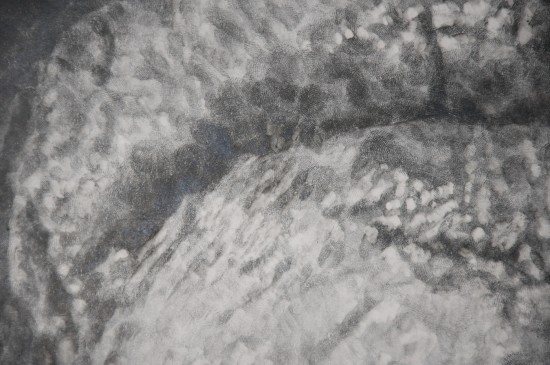 Close’s finger-painting is a touching (literally) record of the artist’s hand, all the more moving in light of the spinal clot he suffered in 1988, which left him paralyzed from the neck down. Close’s most acid fear of not being able to make art again was quashed by his own grit and grind: in 1989 he started up art again, at first by holding a brush in his teeth. Gradually he regained movement in his arms and found ways to paint (at first with a splint with a taped-on paintbrush).

Close’s name is apt and apposite, since he’s super-skilled at bringing us in close with his portrait heads. At times the proximity is frankly uncomfortable, forcing extreme intimacy upon the viewer. At others though it’s a path towards beauty, as the surface markings move into mesmeric abstraction. What’s breath-taking is the way the face emerges here, flesh and blood and seeming to breathe, from a massive mesh of puny prints. 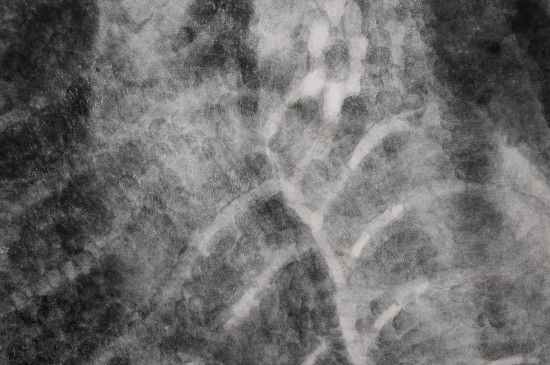