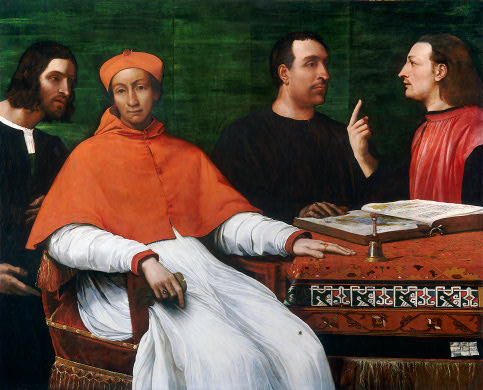 How marvelous to have been flies on the wall for the cringe-laden Cameron/ Sarkozy showdown last week. The official occasion was the visit of France’s President Nicolas Sarkozy and his wife Carla Bruni to London to mark the 70th anniversary of Charles De Gaulle’s wartime broadcast urging his nation to resist the Nazi occupation of France. But the real story became Bruni’s blistering bid to command the camera at all costs. 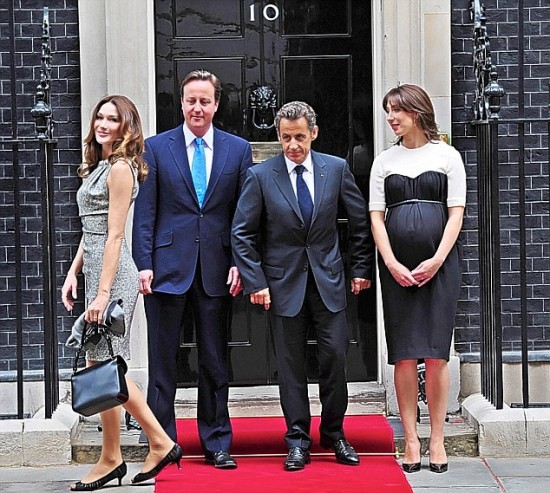 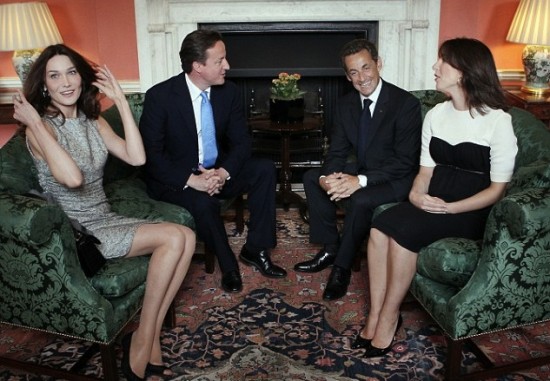 Carla’s campaign started with a draped Dior number (just the right side of a tad too tight) and seems to have centered around luscious lash fluttering and endless salon-style hair flicking. She locked the lens at every opportunity and no one else stood even a slim chance against the slim, glossy, I’m-the-bossy show-boating. Carla kept her most impudent move for the ceremony itself: sitting side-by-side with Samantha Cameron, she spied a fat black fly that had alighted on the white bodice of the wife of the UK PM. Bruni seized at the opportunity, but instead of just telling Sam about the insect (surely the most sensible thing to do), she leaned across, arm and body, and languidly swept it off herself.

Sam’s reaction said it all (a smile at first, but a rigid pose and nerved expression that told another story), as did Carla’s: her smug brow-raise and simpering smile screamed of her delight at having ‘helped out’ (with the cameras clicking all the while). Why the hell wasn’t she just listening to the ceremony, instead of fly spotting and swatting? 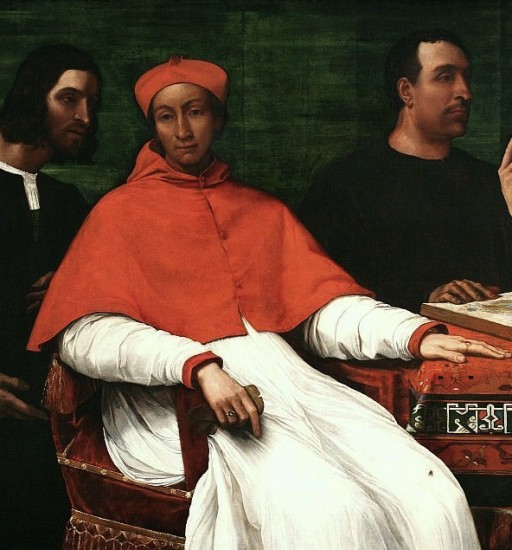 Anyhoo, it’s the “no flies on Sam Cam” (or on Carla, more like) that buzzed today’s picture onto the page: Cardinal Bandinello Sauli, His Secretary, and Two Geographers (1516). It’s by the Italian High Renaissance painter Sebastiano Luciani (c. 1485 – 1547) who’s better known as Sebastiano del Piombo, a nickname he acquired when he became Keeper of the Papal Seals in 1531 (the seals were made of lead, piombo in Italian).

Del Piombo worked first in Venice (where he was most likely born) and then Rome (where he settled in 1511). His early works show the stable compositions and delicate, balanced color-play of Giovanni Bellini and Giorgone, but when in Rome he did as the Romans were doing, and adopted a bolder, more vigorous style. His new look came in under the influence of Michelangelo, who was a mentor of sorts, helping out with patrons, procuring commissions and offering under-drawings for some of his works. In short, he was the sort of friend you want, not one who pulls the ‘it’s all about me flicking off of flies’ move. 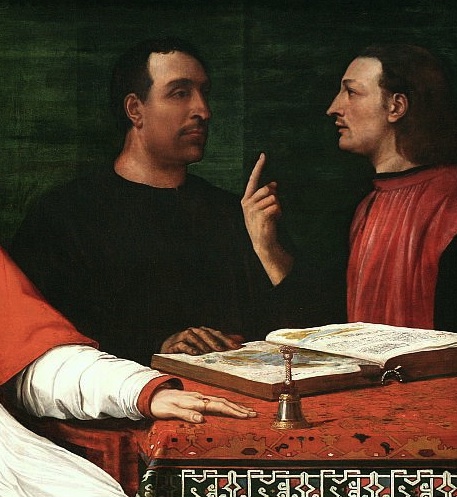 Del Piombo produced many an important religious picture and was justly sought-after as a portraitist. This is one of the earliest Italian group portraits and shows the cardinal on the left (then at the height of his influence in Rome) and three companions gathered around a table (two are discussing that open geographical manuscript). The picture says several things about del Piombo in Rome. He sharpened his eye for faces (highly individualized here) and learned to carve out clear and solid figures (no doubt under the aegis of Michelangelo). These (life-size) figures sit close to the viewer, cropped at their edges and shunted forward by the green hanging drape. The rich palette of saturated reds, greens, whites and blacks show that Sebastiano retained his love of resonant Venetian color.

And my main point in the picture? It’s that fly, of course, just chilling on the left knee of our cardinal friend. See it now? There you go. So we should ask ourselves: why is it there? 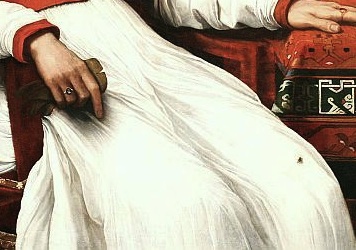