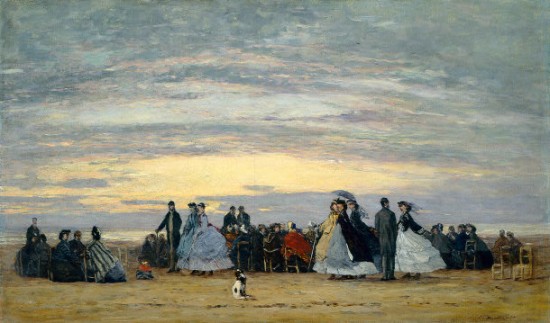 This week I’ve been laying into ‘online’ a little, suggesting (on Monday) that it can lead to loneliness and encouraging (on Friday) people to peel away from their Facebook wall. But it seems that ‘on-line’ is shaking off its ‘isolated’ and ‘cyber’ stigmas: on the self-same day that roomfuls of Art 2010 readers will gather at the Hamiltonian Gallery in DC to celebrate the half-way point of this blog project (still not too late to sign up for the Hump!), I’m seeing that tech can actually teach people how to meet up en masse, in the real world.

Hundreds of millions of us live at least part of our lives online and at first people predicted this would rot us into socially-severed virtual vegetables. But our need for human contact, and our feel for a (real) face-to-face connection has confounded early assumptions about our online era, to the point that the internet is encouraging us to interact like never before. For example. The Foursquare app allows users to check in at various locations in cities around the world, to broadcast a location to existing friends and would-like-to-meet new ones. Google Latitude is similar in that it gauges where your love-ones are, and Loopt lets users find and chat to each other.

And who wants in on these tech-sparked initiatives around the world: Dutch Open Coffee on Linkedin connects business professionals in Dutch cities for a weekly coffee meet. In France, Apéro Géant uses Facebook as an organizing tool to pool tens of thousands of people to faire la fete in huge open spaces. And check this a recent tweet from SouthWest Airlines: “Hey Panama City! Join us @ Tootsies @pierpark 9-11 tonight! 1st 100 customers to whisper #seaturtle at the door get drinks on us! #SWAECP.” 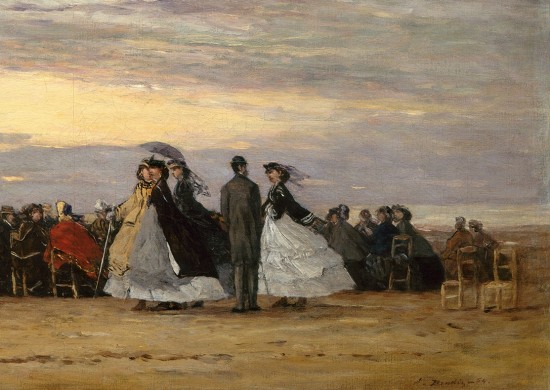 All these real real-world gatherings beg us to join this bustling bunch on The Beach at Villerville (1864) by the French painter Eugène Boudin (1824 – 1898). Boudin was important as a direct precursor of Impressionism: the key that unlocked his practice was the fact that he painted outdoors, one of the first French landscape painters to do so (in fact it was Boudin who encouraged Claude Monet to begin painting outside). Growing up in the northern coastal town Le Havre and with a father who worked as a maritime pilot, perhaps it isn’t a surprise to see that Boudin was beckoned by the sea as his principal subject. His marine paintings are seascapes, or beach or harbour scenes, all fresh and infused with salt, sand and sea air. 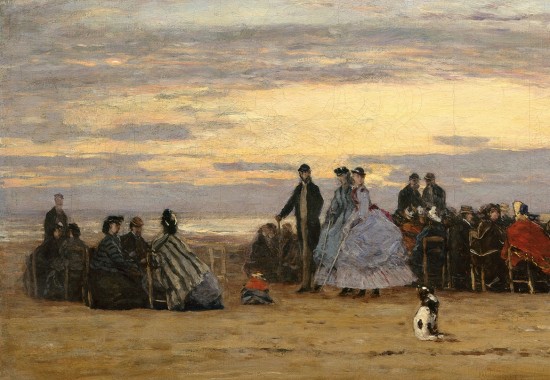 Here’s he’s got a pack of pleasure-seekers on a beach in northern France. 20? 30? There are tons of them there, and Boudin begins to detail their fluttering skirts and long-tailed jackets. But the focus here, as is usual for Boudin, is the luminous sky that takes up so much of the picture space. Juddering and patched, it arcs across, shot-through with a smear of yolk-yellow and inklings of just-there pink. The sky is where we see ‘Boudin the early Impressionist’ come out, in it’s haziness and sense of instantaneity. His friend the artist Corot was amazed by Boudin’s skies, telling him: “You are the master of the sky.”

The sight of these ladies and gents all under one roof (so to speak) brings me back to the mass-mingling trend we’ve been talking about. I’ll say that even though it’s great to see tech-led social ‘scenes’ starting up in the real-world, let’s be clear: in the case of Boudin’s beach-goers, no internet was needed. 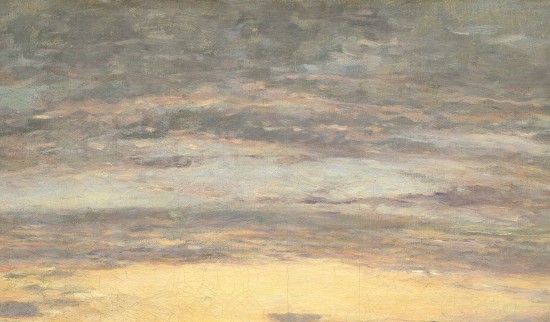 2 thoughts on “Meet and Greet”