I’m stumped as to how to introduce Michelangelo: where does one start with a titan like this, whose career lasted three-quarters of a century, for which time he was unchallenged as the biggest and best artist in Europe? He’s now known the world over (pop star style) by his first name and his Adam, David and other icons are etched on the eyes of so many minds. Michelangelo (1475 – 1564) thought of himself as a sculptor first, but painting, drawing and architecture, he had it all covered. There’s a sprinkling of his scintillating brilliance sitting in the NGA, in the form or a few small drawings. And that’s cause for a serious sit-up-and-listen, since even the didiest of doodles by this man can and do fetch millions on the art market. We’ll look at two Male Nude sketches today.

It was the Post (Huffington) that pushed me into Michelangelo’s arms today. It seems that like any other great cult icon of our times, people are unable to let him or his genius lie. A few weeks ago the Post published an article about two neuroanatomists at Johns Hopkins University School of Medicine in Baltimore, Maryland, who’ve ‘discovered’ that the artist inserted secret anatomical illustrations into his paintings on the ceiling of the Sistine Chapel in Rome. Yes, really. Rather like the physician Frank Meshberger who in 1990 ‘observed’ that  there was ‘a perfect anatomical depiction of a human brain in cross section’ in the God Creating Adam fresco, Ian Suk and Rafael Tamargo have unearthed body parts in God Separating Light from Dark: a human spinal cord and brain stem. 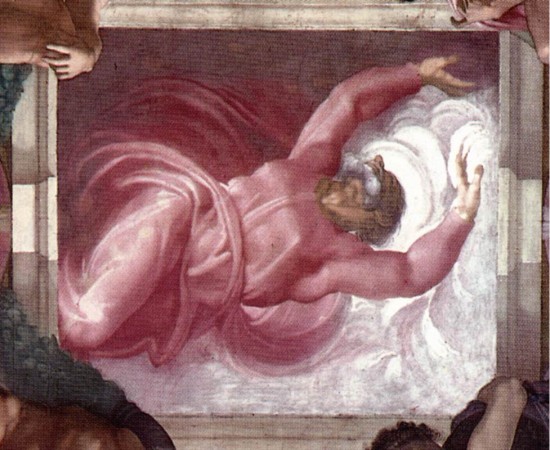 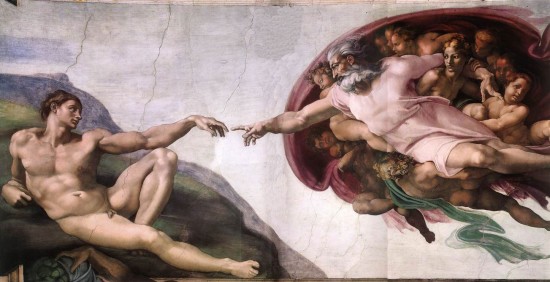 Now what I think is at best a Rorschach test-like effect in which two brain docs are seeing their favorite things, is spinning into speculation as to what these ‘codes’ might mean. Is this a comment on the crunch and grind between science and religion? Is this the artist’s attitude towards the church shining through? My two pence is that we’ll never know, so can we get back to the pictures now, please? 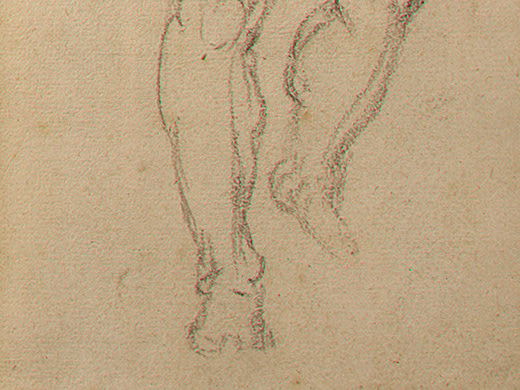 The NGA’s Male Nude sketches come off two sides of the same sheet (the verso is the “back” and the recto is the “front”). The hair-standing-up-on-end element here is the fact that these few and fine lines on a flimsy single sheet effortlessly record the mega mastery Michelangelo had in portraying the nude human figure. Much is made of the fact that he dissected corpses in Florence as a young man (he was well ahead of the legal curve on this one, and could only carry it out with the help of a friendly prior at Santo Spirito church). What he saw gave Michelangelo a grass-roots grasp of how we’re put together, all the better to put his figures together on the page, in paint or carved from stone. 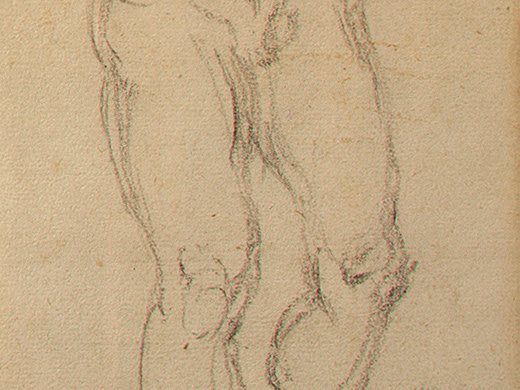 Let’s take the recto view and work feet up: maybe I’m biased (Michelangelo is my main art crush) but how efficient and effortlessness are those sparse markings that lick into life this fabulous figure? Jutting calves, bulging thighs, a thicked-out torso and steady shoulders all make him look monumental, even though he’s mini. And that’s not all: read the believable bodily state and intent in the set of the legs, the swing of the body, the wheel of the arms and the drop of the head. 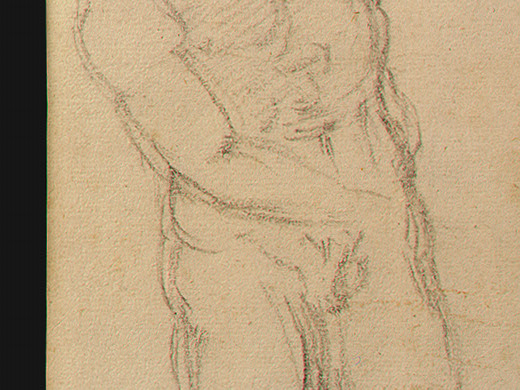 This is Michelangelo doing what he does best: unadorned images of the male nude, which for him could encode all the grace and godliness of man. And no need to look for anything more than that. 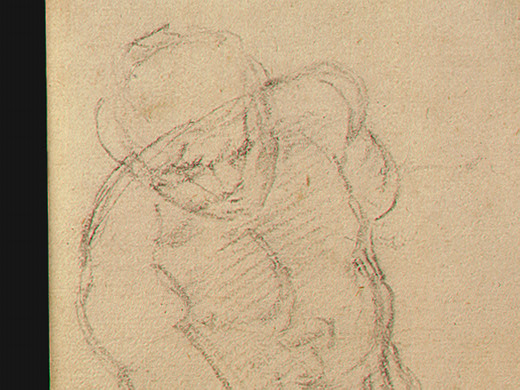