Having just got back from a short stay on Sicily, I’m keen to give Husband a taste of the place. Plopped in the mid-Mediterranean, Sicily really is a separate world (even though its northeast coast is within sight of the the Italian mainland), with its own raft of regional dishes and delights. A little history goes a long way in locating some of the flavors we found. The island is split into an east (Greek in ancient times but later rolled over by a rich layer of Spanish Baroque), a west and a north. The latter two have a history of all kinds of occupiers (Carthaginians, Romans), but most markedly these areas were Moorish. 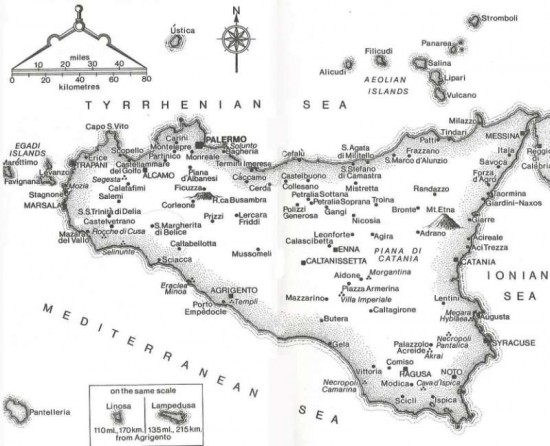 Palermo (where we stayed, in the west), was once the Moorish capital, and had a golden age under Arab rule in the 10th and 11th centuries, when the island blossomed under expert agricultural practices of the settlers. The Moors also brought lots of exotic plants to the island (oranges, lemons, dates, figs, sugarcane and pistachio nuts), which all still infuse Sicilian dishes with distinct character, to this day. We saw lots of pine nuts muddled with raisins, sprinkled cinnamon spice and fresh mint: but mostly the Moorish influence is seen in the abundance of more-ish sugary sweets sticky-ing up every Sicilian street corner. You can’t move (sometimes literally) for the slabs of marzipan (sugar with almonds), cases of cassata (sugared ricotta) and fruit-filled sorbets, all staples of the Sicilian sweet-tooth.

But before we get to dessert, let’s feast our eyes on something a little lighter, A Dessert by Raphaelle Peale (1774 – 1825). Raphaelle was the son of Charles Wilson Peale, a brilliant American portraitist, who named all of his 17 children rather ambitiously, after well-known artists, scientists and the like. Raphaelle became the best painter in the family, producing some fine, austere still-life scenes. These aren’t at all Dutch in appearance or feeling, but rather take from the Spanish 17th century tradition.

Here, what might at first glance look like a simple assemblage of tasty after-dinner treats, is in fact a flat surface filled with the reaching dreams of the new American republic. The Founding Fathers had found much to follow in the democracies of ancient Greece and Rome, so art started to fall in-line with a corresponding, neoclassical look that was balanced, clean and “majestically plain.”

This Dessert is about serving up political principles as well as a snap of sweetness and crack of shells: the composition is ordered, each object lined up along a grid of sorts, parallel to the picture plane. The oranges sit in the middle of the canvas, the lemon finds a counter-weight in the walnuts and even the arc of the oranges is mirrored in the bend of the bowl.

The colors are strong yet restrained and the shapes are sound and rounded off (see the spherical oranges). The Americans Peale painted for were practical people for whom art was not a priority: by making his fruit and nuts so palpable, Raphaelle grounds his work in the real world. A good job too, as I’ll be needing some of his ingredients to make Husband some of the Ricotta, Almond and Lemon Cake we savored on Sicily (recipe from Spring in Sicily: Food from an Ancient Island).