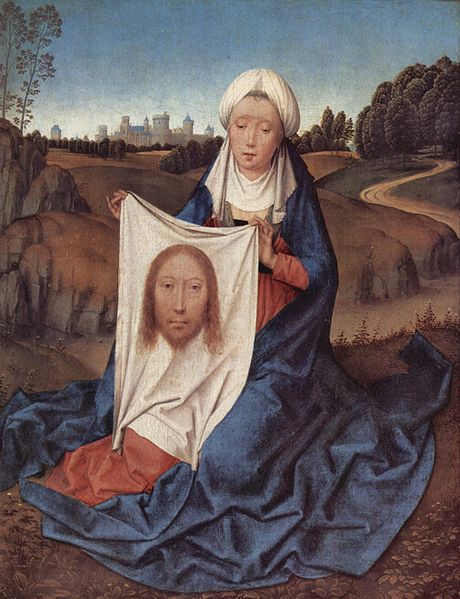 Among my most churning church experiences was a feast for Saint Gennaro in Naples one year, where a cardinal from Rome rocked two phials of the 3rd century saint’s be-crusted blood before a congregation of avid believers. After 18 minutes, he announced the blood to be flowing freely, and an almighty cheer arose: this meant a good year ahead for Naples. 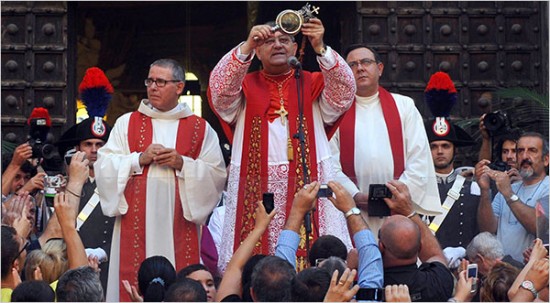 In the same city, countless shrines cluster street corners, all dedicated to Diego Maradona (he played for Napoli for years), stuffed with pictures and (importantly) his hair strands and sweat. 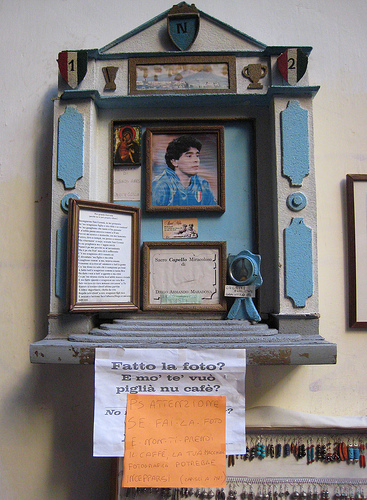 And all in, I must have seen at least 10 thumbs and pinkies once-belonging to John the Baptist in chapels and churches across Europe: either he was a man of many digits, or something else is going on.

It’s the feel of the physical that connect us to relics: spit, sweat, blood, tears, hair and bones all make believable the stories in the Bible and elsewhere. It’s this same bodily fixation that flits behind what is probably the most fascinating of all religious relics, the veil of Veronica. Yesterday was the feast day of the woman of Jerusalem who became one of the most venerated saints of the Middle Ages and Renaissance. She’s the one who wiped the face of Christ as he made his way to be crucified in Calvary and, so the story goes, the cloth became imprinted with an image of his face. This tradition gave the saint her name: “true image” is vera icon in Latin, so in time these words fused to form “Veronica”.

There are a couple of versions of this event at the NGA: this one is Saint Veronica (c. 1470 – 75) by the Netherlandish painter Hans Memling (c. 1430/40 – 1494). Born in Germany, Memling became a citizen of Bruges in 1465 and then the city’s leading painter for the second half of the 15th century. This picture has the saint seated central within a landscape: it’s a peaceful devotional image that derives its calm from the pyramidal composition, the setting and the saint’s face (not one trace of the searing emotionalism of Memling’s master Roger van der Weyden). The shading on the robes is pointed and particular: a knack for observation renders the dress, faces and setting sharp and sensible. The style of the background landscape is hallmark Memling: feathered trees, rolling rocks and architectural detail, fading just a smidge at the edges, might have influenced Italians like Perugino and Raphael. 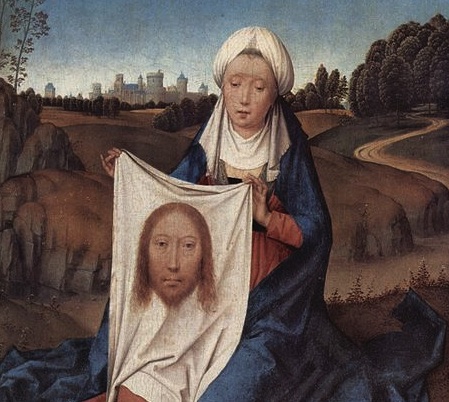 The thrall here falls in the area of the two faces: one devout, with downturned eyes and the other outward looking, on the cloth. His stare, so real and yet dead taps into the eery allure of relics to this day. Though there’s no historical or scriptural reference to Veronica’s veil, her legend became a linchpin in Christian lore and her cloth is one of the prize relics of the Church. She’s said to have taken it to the Holy Land before it was sited in Rome in the eighth century. By the 13th century it’d been taken to the Vatican, where it remains to this day. 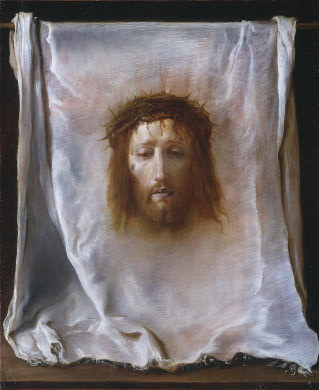 This is the second take on the subject at the NGA, by the Italian painter Domenico Fetti (1589 – 1623). Now, isn’t his face fascinating for its veracity? The fabric is folded, fringed and flapped in a way that beggars belief. In the center hangs the purle-lipped falling face of Christ, flesh almost feelable (waxy with death?). Fetti’s fine brushwork forces us to get physical with a face, so much so that even if we reckon relics are nothing more than religious hocus-pocus, it’d be hard to argue with the power of paint.