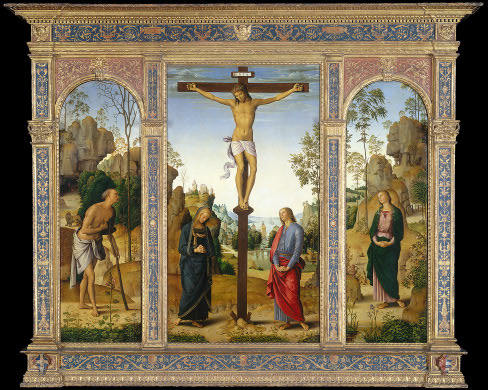 Today’s the feast of Mary Magdalene, a woman described in the New Testament as one of the most important figures in Jesus’s ministry. In texts, Mary is identified by ‘Magdala’, which might mean she was from the town of the same name on the western shore of the Sea of Galilee. Also, in Aramaic, ‘magdala’ means ‘tower’ or ‘elevated, great, magnificent.’

Mary Magdalene has been seen as a prostitute, a sinner, or simply a woman who abandoned herself to a life of luxury before turning to Christ. In fact at their meeting, he cleansed her of the “seven demons” that defined her earlier life. Here she is in the eyes of Bernardino Luini (c. 1480 – 1532), one of the most popular Milanese painters of the early 16th century. 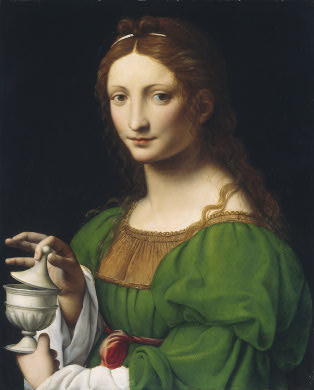 He shows her as a beautiful, worldly woman, dressed in elegant attire and holding what might be the emblems of one of her iconic actions (the anointment of Christ’s feet with her tears and hair). It’s sometimes said that Luini paints as a poor man’s Leonardo da Vinci, and indeed she does have, in that enigmatic half smile and the soft hazy effects of her skin, some distant shades of the Renaissance master.

Once purified, the Magdalene devoted herself to Jesus and his teachings, entering into his inner circle. Indeed, in apocryphal texts, she is portrayed as a visionary and leader of the early movement, who was loved by Jesus more than the other disciples. Several gnostic gospels (such as the Gospel of Mary, from the 2nd century) even see her as a special ‘disciple’ who had a deeper understanding of Jesus’s teachings and is asked to impart this to the other apostles.

In any case, she was a prominent figure in Jesus’s last days and stayed with him until the end. She was present at the cross, when the male disciples (except John the Evangelist) had already fled. This side panel from a Crucifixion altarpiece by Pietro Perugino, shows her standing serene and composed at the side of the action. 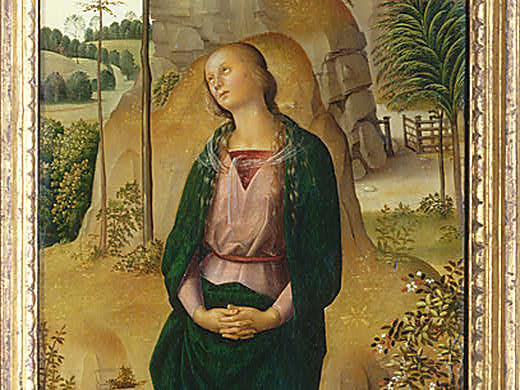 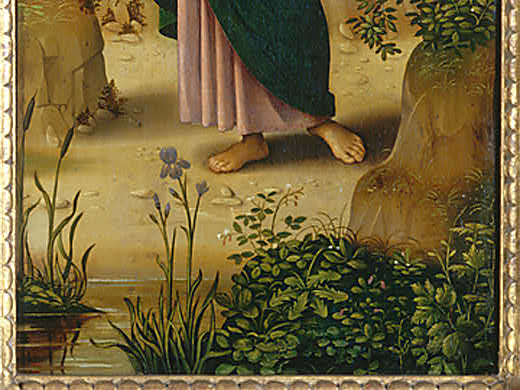 Perugino (c. 1450 – 1523) was hailed as “the best painter in Italy” in 1500 (he was a formative influence on the young Raphael) and this work, with its calm, classical balance and proportion is a good indicator of his style. The poise and prettiness here are in stark contrast to how Moretto da Brescia, another Italian artist from around the same time (1498 – 1554) manifests the Magdalene in this crucial scene.

Here she’s red-haired and ravaged by the experience of seeing Jesus dead: clasping his feet, face buried in is legs, her own thrown left and right. Moretto is a man who took up aspects of the Venetian style (the city was close to Brescia in northern Italy), especially their color and play of light. However, the searing emotion of this scene could only have been created in the rarified religious zeal of a provincial place like Brescia.

According to all four Gospels of the New Testament, Mary Magdalene was the first person to see the resurrected Christ (‘Noli me tangere’ he told her: do not touch me). She then spent the final years of her life in the wilderness, clad only in her hair, in repentance. To close we’ll take Giulio Cesare Procaccini (1574 – 1625), from Lombardy. This elegant image shows a swooning Magdalene amidst a set of supporting putti and music-making angels. The two figure groups are hatched into harmony by a series of gestures and glances. This is the Magdalene in uninhibited ecstasy, moments before being born up to heaven. 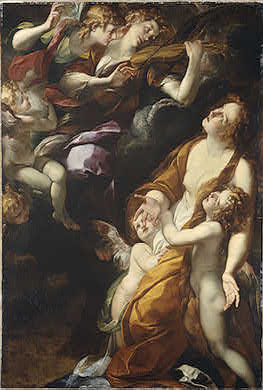