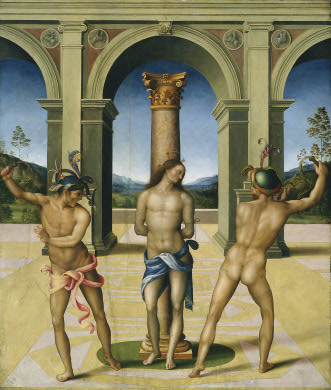 Warning! If you’re likely to be offended by the loucher and more licentious links that Art 2010 occasionally makes between art and the art of living, then look away now. Because today we’re discussing Speedos, and Lord knows it’s going to get messy. It’s summer, so swimwear has been preying on my mind (and parading before my eyes). Fact is I’ve got shocking news to report: Speedos (those clingiest, briefest of briefs) have had a huge surge in sales this year. So if you’re planning to be on the beach or by the pool at some point soon, don’t say I didn’t tell you.

Now. Snug-fitting things are fine, in some quality-controlled conditions. Remember Daniel Craig coming out of the ocean in some super-small trunks in his first James Bond? See, that was fine. Or the finely-tuned and tanned ‘Australian Rugby Team’ that fetched up in the pool in the second Sex and the City film? Also fine. 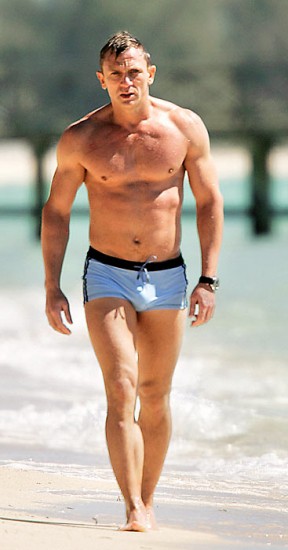 But Speedos become borderline obscene if they’re seen on the more beer-gutted, sunburned, socks-worn-with-sandals bodies of the Brits (who are the ones who’ve boosted sales by 153% this year). How to explain this distressing trend? Aspirational attiring? Jeremy Langmead, editor of the UK’s Esquire magazine thinks so: “It’s never the cute guys who wear them on the beach. It’s the middle-aged fat lumps who’ve seen a picture of a toned guy in Speedos and think if they wear them they’ll look like him.” Others see a more money-minded cause: in May, as sales of Speedos soared in the US, fashion experts speculated that the shortening of swim shorts could spell improvements in the stock market.

Would you believe it, there’s an artist at the NGA who’ll allow us to ponder this pressing issue further: Francesco d’Ubertino Verdi, called Bachiacca (1494 – 1557) was a Florentine painter who started out in the studio of Perugino. In 1515 he was working with other artists in the city on painting room furnishings and by the 1520s he’d established himself as a painter of predellas and small cabinet pictures. Later his output included large altarpieces.

The Flagellation of Christ then is a relatively early work (c. 1512/1515) and slots into the smaller-scale pieces Bacchiacca was doing at the time. There are tangible traces of Perugino’s influence here: in the balanced arrangement of figures and architectural forms, in the restrained facial features and controlled gestures (remember this is a torture scene) and in the landscape fading into blue beyond the action.

Everything is flushed with poise and prettiness: the detailing on the arches and column capital, the feathers flouncing out of the hats of Christ’s persecutors and the twirls of material draped across the groins. And it’s those loin-clothes that I want to focus on for now, because they reveal a lot (double entendre intended) about the time and art trends. They’re sparse so that we’ll see more of the bodies beneath: the Renaissance saw resplendent achievement in anatomical awareness and Bacchiacca had probably been boning up in his bones and muscles and flesh-painting (see how he’s showing us how good his buttocks are on the right). The artful arrangement of the twills of material on the left and on Christ again pronounce the presence of Perugino’s style: he was a fan of this sort of decorative detail.

So what have we learned, by the close of this post? That better bodies, good fit and none-transparency are all musts for ‘banana hammock’ wear? Otherwise, they’re just bad beach behaviour. And gents, if you still insist on a Speedo, just stay out of the very cold water.

One thought on “Bare Essentials”