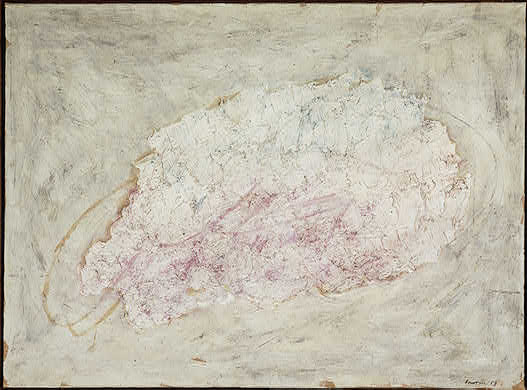 At the cinema last week, the trailer for a new film Countdown to Zero blasted into the auditorium. See what we saw here:

Written and directed by acclaimed documentarian Lucy Walker, it traces the history of the atomic bomb, from origins to the present state of global affairs. Walker makes a compelling case for worldwide nuclear disarmament, an issue more topical than ever, with the Obama administration aiming to revive the goal today.

Seeing the trailer jettisoned my mind towards Jean Fautrier (1898 – 1964) a French artist whose works are pitted and punctured in the most profound way by his experiences of war. He’s a fascinating figure: he moved from France to London aged 10 and later studied at both the Royal Academy and the Slade School of Art, before returning to Paris in the 1920s to hold his first exhibition.

World War II had an indelible impact on his output: so much of the art that came out of the continent in the postwar years sought to convey the physical decimation, social unease, political division and economic collapse that had happened in Europe. People placed Fautrier as a pioneer of Art Informel (a term coined by the French critic Michel Tapie to describe the spontaneous abstract painting popular in Europe in the 1940s and 1950s), but he himself resisted the label, as he did all other attempts to place him in a cultural pigeon hole. Fautrier’s art, he said, was based only in reality, and an unbearably harsh one at at. For example, his studio at Chatenay-Malabry was near a wood where, during World War II, the Nazis executed prisoners each night (he himself had been arrested and briefly detained by the Gestapo in 1943). The screams haunted Fautrier, and he flailed to log his feelings of terror and helplessness in a series of paintings and sculptures called Otages (Hostages).

Despite the prosecution of prominent leaders of Nazi Germany at the Nuremberg Trials in 1946 and the implementation of the Marshall Plan the following year, Europe could not release itself for a long time from the legacies of the war. In art, bleak realism and brutal symbolism only eventually gave way to warmer colors and more direct imagery, though I suppose our work today Body and Soul (1957) shows some softening in the artist’s eye and mind. Certainly, it tells of the technique that Fautrier found postwar, his haute pate (high paste) approach, a multi-layered, sculptural painting style. Here we have the typical thickened effect of his later works: it’s made up of oil and varnish with sand and dry pigment on paper mounted on canvas. After the fattened application of materials, he scored the surface, interrupting it and breaking it up.

The artist asks us to see reality reflected in this work, and look long and hard enough and it’s sitting there, simmering below the surface. The idea of the transformation of the body was significant in these years and here we have both “Body and Soul” caught up in a tumor-like bulb in the middle of the canvas. The pinkish hue here and there adds hints of beauty, while the amorphous, open-like nature of the form indicates a subtle eroticism. But for me Fautrier is still shot-through with pain and tragedy, and this still aches with the angst of an existential crisis. So that even though this work is filled with freedom and a sense of individualism, it’s not clear of what the critic Herbert Read referred to it as “the geometry of fear.” And in the 1950s that fear was focussed on the growing threat of nuclear war.

One thought on “Explosive Device”