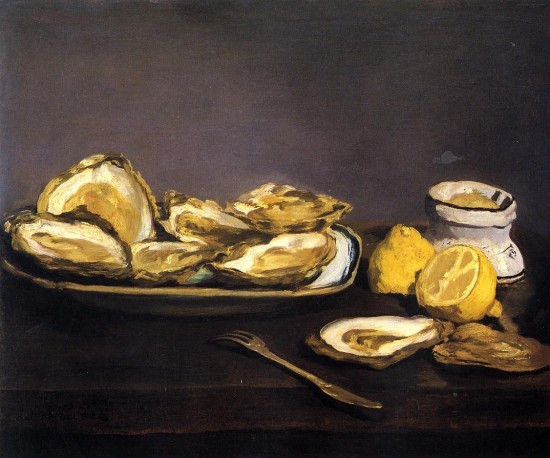 Husband and I added the odd art touch to our wedding last year, such as our table-names, which were all based on paintings (of couples cuddling, caressing, clinching…). But our art injection was nothing compared to a recent wedding party thrown by auctioneer Simon de Pury (currently appearing as the bright, blustering mentor to the contestants on Bravo’s Work of Art: The Next Great Artist) and Michaela Neumeister, who married six months ago.

Truly, this was an art-party that had guests’ jaws to the floor, so much did it alter the notion of celebration: the good news is, we’ve got the inside track from someone who was on the inside. Invitations specified that guests should arrive at the Saatchi Gallery (in London’s Chelsea) at 7pm sharp. There, people were presented with seating tickets for supper tables and ushered to the top floor. In the first room stood a raised table stacked with 1,000 shucked oysters and cut lemons, all on a bed of ice. This lot was “lit to perfection” and left people standing around, wondering what to do.

In the next gallery, another table, this time festooned from above with a surreal Magritte-style sky-scape of strung-up salamis, big and small, thick and thin. Also there were knives, mustard jars and a big brown bag stuffed with bread rolls. The next two rooms racked up buckets of champagne  and bottles of beer, as guests started slowly to gather  the gist of the evening’s intent: to drink and devour the displays, thereby delving into this ‘artwork’ in the most intimate, munching way. Later, a dinner was dished out on heaped-high platters on a series of beds (all white linen and fluffed-up pillows) scattered across a room. 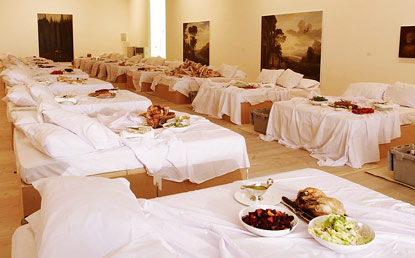 So it’s in imagining that shimmering stack of oysters that we turn to Manet’s oil on canvas Oysters (1862) today. Edouard Manet (1823 – 83) reacted strongly against the academic history painting of his teacher and began a career as an artistic rebel with his work the Absinthe Drinker (1859). This scene, selected from the seamier side of life, set him on a trail towards modernity, with an eye for new subjects and a hand for a fresh style. 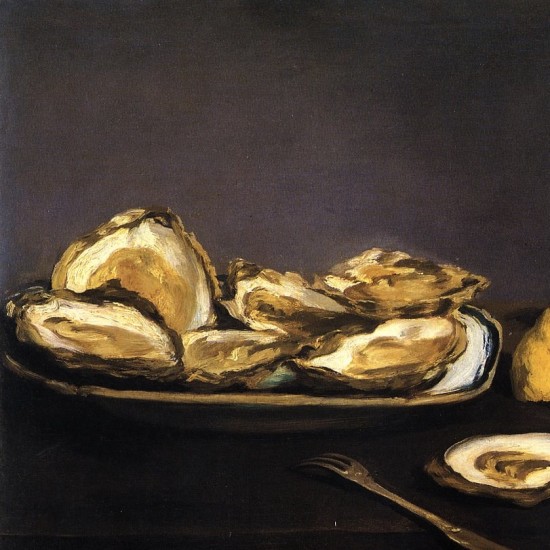 Oysters is one of Manet’s earliest still-life scenes (reportedly painted for his fiancée) and shows the brilliance of his burgeoning technique. His art is often based on an opposition of light and shadow, with as little transitional half-tone as possible. He preferred to paint directly from his models with speed and immediacy, with a limited palette in which black was extremely important. Brushwork is blindingly good: single slicks fatten the oysters across their shells and paint puckers across the pickled skin of the fruit. Each color and stroke stands independently on the canvas: it’s our eyes that blend them into form. 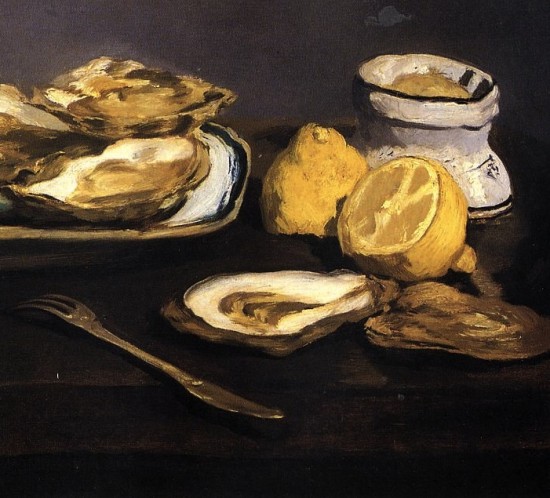 Manet loved the Louvre and drew much of his artistic guidance from Velazquez, Goya and Hals, whom he ‘met’ there: this pic has shades of a 17th-century Dutch still-life and 18th-century Chardin. His work though was too out-there for the Salon, which frequently turned down his offerings (Manet spent his year craving Salon acceptance).

Back now to our out-there art party hybrid, for the most eye-popping piece: before dinner, guests watched Simon and Michaela getting ready for the feast in glass-doored cubicles. After he’d had his hair cut and dried, Simon shattered the glass door and claimed his bride, breaking down her door to join him. Now, why didn’t we think of that?