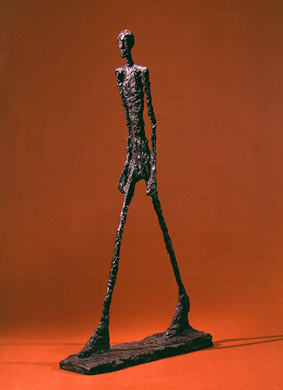 I’ve long been a big fan of walking. Perhaps it’s a practice in-built from my time in Milan: Italian Sunday evenings are sacrosanct as the period of the passeggiata, which translates as a leisurely stroll through one’s hometown with family or friends. City-dwellers would don their Sunday best, perhaps gobbling a gelato, and chat away into the evening, all the while ambling along Milan’s main scenic streets.

In another setting now, I’ve not lost the habit of filing on some flats or lacing up my trainers to tramp the streets. In a new area, footfall is the fastest way to get to know the lay of the land (I’ve been told all along that Washington is ‘walking’ city, though there are times when only the metro will do for this urban sprawl). If you’ve yet to grow fond of the gym, walking is a well-known way to burn calories and cull inches from here or there (in fact, I recently read about a New York trainer who’s rolling out a Walk Before You Eat scheme, in which dieters sandwich a meal between two long distance walks).

It seems all round that walking is hitting a certain stride, trend-wise. Rumor has it that even Los Angelenos are starting to close off their cars in favor of treading their traffic-congested city. In England, where the rolling hills and the famed green reaches have made walking more of a quintessential national pastime, the Ramblers just celebrated their 75th year. Formally known as the Ramblers Association, this is a charity that makes public footpaths available to all (and I think they beat down Madonna when she campaigned to shut down just such a footpath behind her English country house). 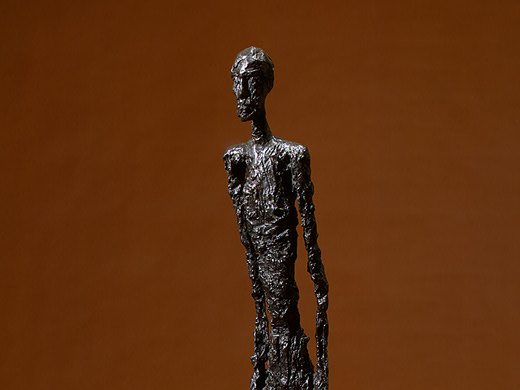 Now, what better work for today than this Walking Man II (1960) by Alberto Giacometti (1901 – 1966)? This Swiss artist is best known for this sort of thin, elongated human figure (this one’s done in bronze), though he’d started out making flat, almost 2D works that drew on primitive art, and was then a Surrealist in the early 1930s. From the mid 1930s, Giacometti returned to working from models, and showing the outside, rather than the inside world, and over time his figurines became smaller, more spindly. He was in Switzerland in the time of World War II, but returned to Paris in 1945, where he befriended the likes of Picasso, Simone de Beauvoir and the philosopher Jean-Paul Sartre. 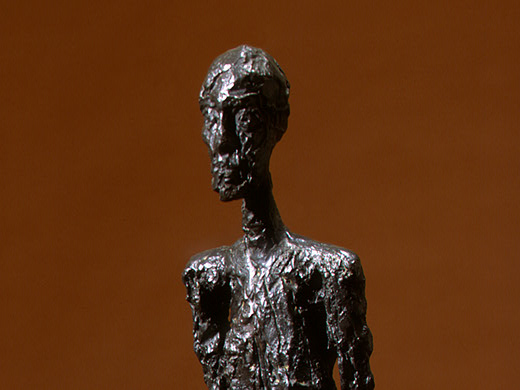 This sort of work from him looks simple enough: a stick man of sorts strides right before left, looking ahead. But stand a little longer and there’s an incredible energy that radiates off the roughened surface of the material. Perhaps it’s in the indistinct and yet set features on the face. Or the way the shoulders are angled stiff and straight. There’s a palpable purpose in the hang of the arms and a definitive direction in the line of the legs. 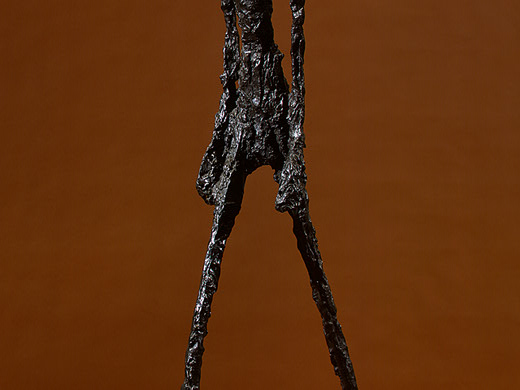 I think Giacometti is a beguiling barometer for the existentialism that pervaded post-war Paris, so that this genre of gristled, emaciated figure naturally conjures up thoughts of solitude and death. Some say he found it a challenge to translate reality into sculpture, but for me this speaks clearly of the strife he must have seen in his lifetime. Mostly, it’s the way the feet are fettered to the lumpen block at the base that’s surprisingly suggestive. 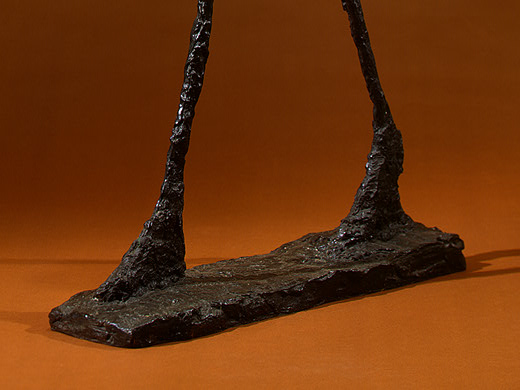 One thought on “Walk This Way”