It’s a saucy Sunday today I’ve decided, as I’m starting with an artist who paints with her breasts. Yes, her breasts. Meredith Ostrom is making quite a splash (and a mess, I imagine), by using her body bits in interesting ways. Lured to London by its ritzy, glitzy art scene, 33 year-old former model Meredith is originally from New York. She’s well-settled in the city’s celebrity clan (she dated Duran Duran’s Nick Rhodes for years), and her work seems an extension of her sensation-filled life-style. 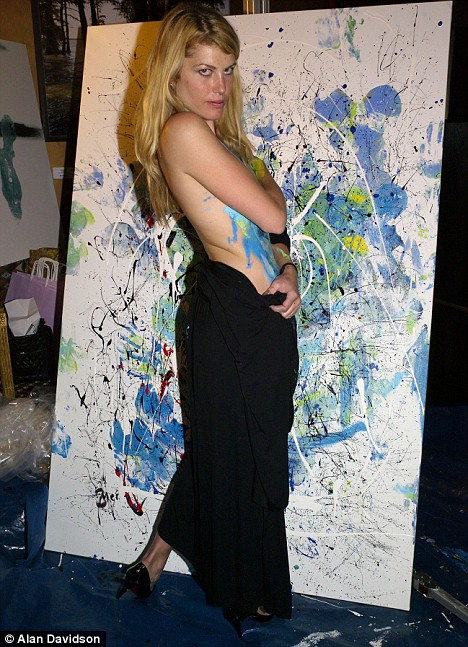 Ostrom trained as an artist but claims the gift of painting in her birthday suit came about by chance: what started as an experiment for a group show in New York a few years ago has swelled into a full-time and buoyant career, including solo shows and the odd performance (always well attended, I’d hazard a guess). When asked how it feels to paint naked, Ostrom states the obvious: “Well, cold!” (she applies the stuff with surgical gloves and gets it off with washing up liquid). Her work sells for thousands in New York and London: for her latest series, called Diamond Dust Bust, she painted herself, rolled in diamond dust and pressed herself against a large canvas. DDB (which to me even sounds like a bra size), has been going down a storm: according to Ostrom, the president of Georgia has snapped one up and Nicolas Sarkozy’s brother has one as well.

I’ve gone for today’s painting because, well, it’s pretty obvious I’d say: what a lot of bouncing boob on show! This is called A Lady in Her Bath (c. 1571) and is by the French artist François Clouet (c. 1510 – 1572). As upfront as he is here, I’ve not really oggled much at Clouet in the past: he was the son of Jean II Clouet, a Netherlandish artist, whom he succeed as court painter to the French kings Francis I, Henry II and Charles IX. François was the foremost portraitist of the French Renaissance and seems to have had the nickname Janet: here’s what Ronsard, his contemporary as court poet, had to say: “Janet, honneur de notre France.”

This Lady in Her Bath is a portrait too, we think: she might even be a royal mistress. She’s sitting in a tub that’s lined with white material that she’s pulling back with her left hand to reveal the artist’s name inscribed below. Her right hand rests on a board that supports a plump and sumptuous still-life (behind the bather, a boy is about to grab at the grapes). To the left, a smiling wet nurse suckles a baby on a mind-boggling, balloon-like breast while in the background, a maid holds a pitcher of water as more is heated for the bath. Her cleavage too is rendered with attention.