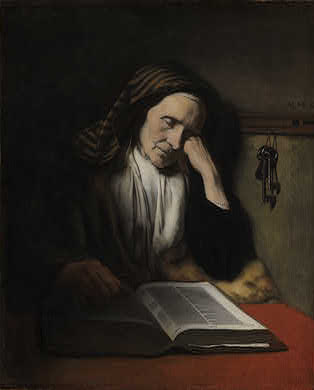 The author Edward Verrall Lucas once wrote “there is more refreshment and stimulation in a nap, even of the briefest, than in all the alcohol ever distilled.” So that’s some serious refreshment, then. Scientific research does stand behind the physical benefits of short bouts of sleep, which seem as integral to our well-being as a bowlful of fiber or a long walk in the country. Taking naps makes us more alert and creative, improves our mood and increases our productivity: one Harvard Medical School study shows that a 45-minute nap improves learning and memory while Matthew Walker, assistant professor of psychology at the University of California at Berkeley, has it that we “need to sleep before learning, to prepare the brain, like a dry sponge, to absorb new information.” It seems that a biphasic sleep schedule (napping as well as sleeping at night) helps us shuttle info into the prefrontal cortex, where it becomes part of our long-term memory.

What all the science doesn’t delineate is the sheer deliciousness of a nap: the decadence of sneaking off to crawl under the covers, draw the curtains and sink into a cool pillowcase, letting the world and its worries drift into the distance. A nap is a sweet stolen moment, taken when the day is not yet done and when others aren’t around. There’s one woman catching her 40 winks at the NGA: this is Nicolaes Maes’s Old Woman Dozing Over a Book (c. 1655). Maes (1634 – 93) was born in Dordrecht, the son of a well-to-do soap boiler (how’s that for a bit of bubbly parentage). Early evidence of his career is sketchy, though there was some learning to draw with a local or general master (een gemeen Meester). 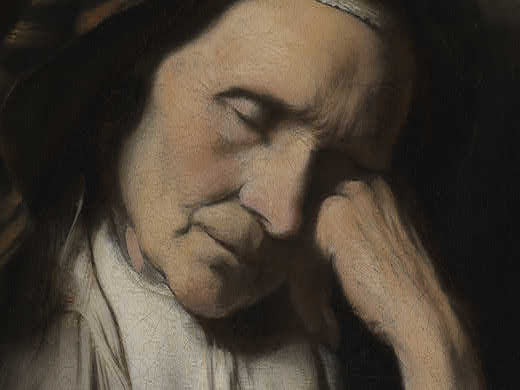 The important thing is he went to Amsterdam and studied with Rembrandt c.1648, soon turning into one of his most accomplished pupils. This is one of the Maes portraits done in a Rembrandt-esque manner (he was also known for scenes of everyday life, called genre). This old woman holds all kinds of fascination from the start, not least for the fact that she’s shut off from us: she’s asleep, eyes closed, head held against her hand. It’s amazing how the artist causes curiosity simply by sending his sitter off to sleep. 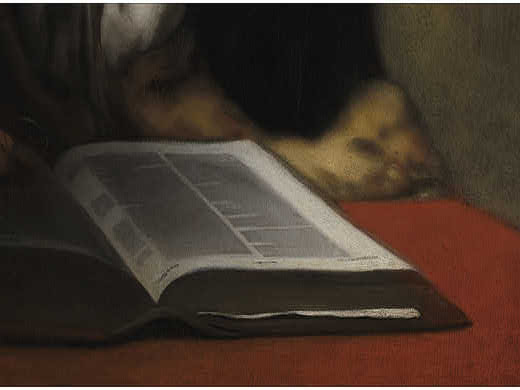 Her face is fabulously painted: it’s velvety, the brush strokes and paint perfectly mimicking the softened touch of older skin. Notice how in some areas, Maes might have deliberately soft-focused certain details: the material under the woman’s elbow, the text which appears smudged across the page. Why did he do this? Because from where I’m sitting, it looks if he’d wanted sharp-sightedness, he’d have had no trouble: see for yourself the clutch of glinting keys appended on the ledge. 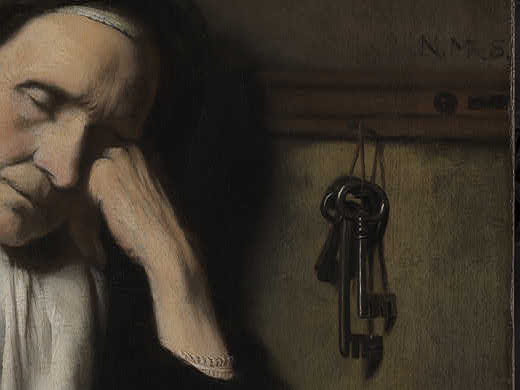 For all it’s seeming peace and quiet, this for me hosts an edgy undercurrent, which has to do with the lengthy tradition that associates sleep and death (see the two states matched in the Bible, Shakespeare, the Romantic poets). It’s a subtle suggestion that might just be at play here, so that Maes doesn’t quite deliver the sweetest dream.

2 thoughts on “Nodding Off”