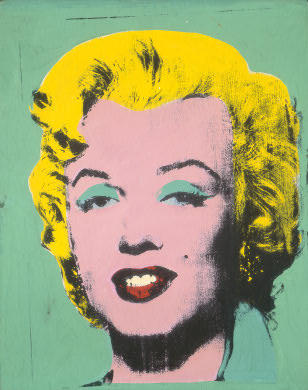 Marilyn Monroe’s star has scarcely diminished in the 40-odd years since her death. Is this thanks to her beauty, or the fact she had affairs with a couple of the Kennedy brothers? No doubt her roles played some part, and the circumstances surrounding her death at just 36 a rather larger one. For me though, the single most important thing in fixing MM into public awareness both back then and now is the artist Andy Warhol: it’s his Green Marilyn (1962) we’re looking at today.

Last week, August 5th marked the anniversary of Marilyn’s death: naked and face down, she was found at her home on Fifth Helena Drive. “The long troubled star clutched a telephone in one hand. An empty bottle of sleeping pills was nearby,” reported the Associated Press that morning. For 48 years this death, and the events that later came to light (reports of a visit by her lover Bobby Kennedy; of an ambulance that took her away breathing and brought her back dead), has remained one of Hollywood’s most enduring and tantalizing mysteries.

Which is why Warhol is still doing her such a service: in the face of the scandal and slur of her demise shine his bright, confident pictures that fix her permanently on a pedestal, at her best. Born in Pittsburgh to immigrant Ruthenian parents, Andrew Warhola (1928 – 1987) was a sickly child. As a young boy he’d pass the time in the company of film star magazines, planting the seed for his fascination with all things celebrity. He started out as a commercial artist, but by 1960 was recognized as a leader of New York Pop Art phenomenon, along with Wesselmann and Lichtenstein. The latter said “we wanted to paint pictures so outrageous and ugly that no one would want to buy them, so we used commercial art to send it up, but instead they became high fashion, and our mockery was taken dead seriously and we all settled comfortably into repetition.”

From the banal (repeated rows of Coke bottles) to the macabre (car crashes) Warhol covered it all in the distinctive language of modern advertising. His glamorous portraits of Hollywood stars were also rendered in garish colors and with simplified imagery. He made Marilyn many, many times: her cocktail of glamour and tragedy made her a perfect muse. The work at the NGA is based on a famous publicity still and relies in part on the radical technique that Warhol brought to the traditional genre of portraiture. Called serigraphy, or silk-screen printing, it’s a stencil-like method by which paint is brushed over a screen (of fine silk) so that the color penetrates those parts of the screen that have not been masked. Successive masks can be added to the screen and colors can be combined. Originally developed for commercial purposes (since it’s possible to use unskilled labor to make the prints) Warhol used serigraphy to reel off rapid production of almost identical images. 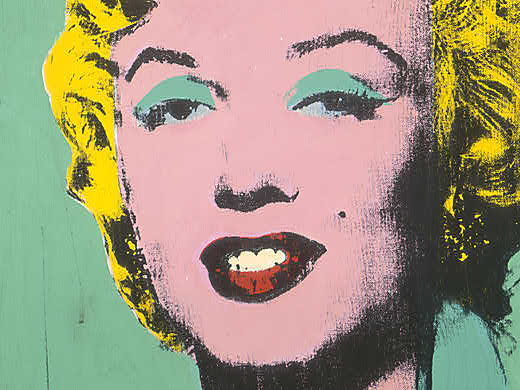 Much is made of the way in which Warhol turned his art into a successful enterprise with the use of mechanical printing processes: he’d even deliberately remove all traces of his involvement by employing assistants to make up his works. So does it matter that nothing was unique or that he hadn’t actually made stuff himself? Not in the least it seems: “Everyone should be famous for fifteen minutes” is what he said, and as this work shows, both he and she have lasted immortal a lot longer than that.