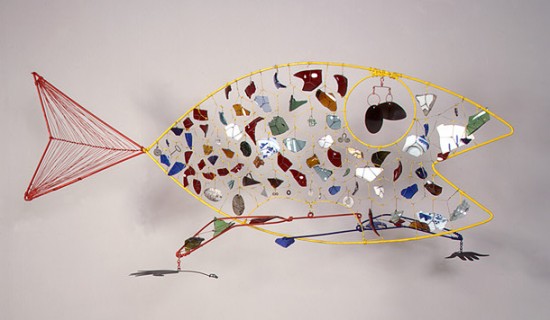 Tonight at 7 p.m. at Politics & Prose (5015 Connecticut Ave., 202-364-1919) writer and angler Paul Greenberg will read from his new book “Four Fish: The Future of the Last Wild Food” ($30, Penguin). It’s a book that’s swum into stores at just the right time, as people turn their minds more to the repercussions of our consumption of things from fresh and salt water. Farmed versus wild salmon; rising mercury levels in tuna; sustainability and ethics: there’s a lot to weigh up before we batter a bit of plaice and stick it on a plate next to some chips.

Greenberg does something smart in his book: rather than succumb to the (typical, apparently) fisherman’s fetish of coming over all ADD and offering “a maze of all the different fish out there”, he focusses on four popular fish varieties. His menu reads salmon, bass, cod and tuna, i.e. those we see most in our market-places, all of which are on the cusp of domestication in some way. Apart from the fact that he’s adamant that some fish are strictly not suited to taming, Greenberg’s main concern isn’t extinction: it’s the loss of magical abundance in the wild. 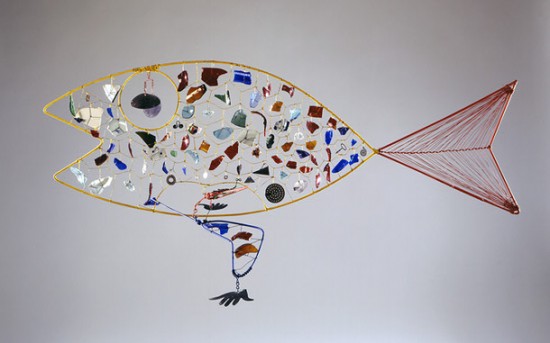 Time it right, and you can encounter that impression of precious, jewel-like nature at the NGA, with this delightful Finny Fish (1948). It’s by the American artist Alexander Calder (1898 – 1976), who worked variously as a sculptor, abstract painter and illustrator of children’s books. He was born into a fertile artistic lineage: his father and grandfather (who both shared his name) were important sculptors, and his mother was a portrait painter. Calder worked first as an engineer (he’d received a degree from Stevens Institute of Technology in New Jersey), and a work like this fish is essentially a marriage of his engineering and artistic minds. It’s dubbed a “mobile” (a term coined by Marcel Duchamp in 1931) and Calder’s “mobiles” (as well as their earthbound counterparts the “stabiles”) revolutionized sculpture. 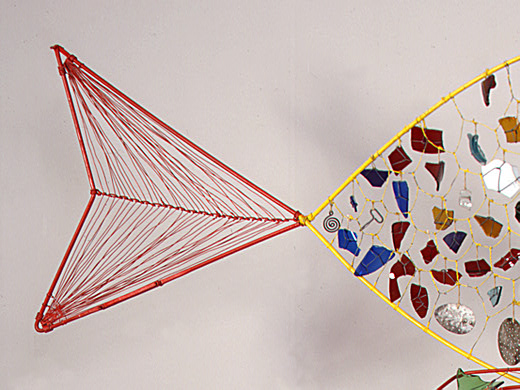 Our fishy friend is a lot less abstract than Calder can get (you’ll probably have swinging in your mind one of his works that looks like an assemblage of suspended leaf and berry-like shapes), but this still gives us a whiff of the tack Calder takes. It’s a question of manipulating painted steel rod and painted steel wire into a delicate construction that’s simple and yet significant, see-through and yet see-me! 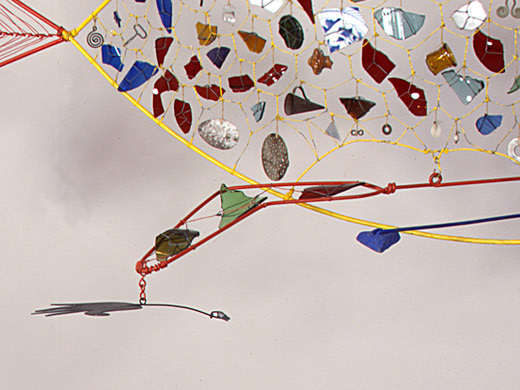 Imagine if you will our friend the fish suspended from a wire and bobbing along in space: Calder had experimented with motorised mobiles in the 1930s but soon settled with the idea of just natural air currents animating his works. As the fish flows free in the breeze, all those small pieces of glass, shards of ceramics and other interesting knick-knacks tied over his side will start to twitch and tinkle: Calder as an enchanting and lyrical sense of play. 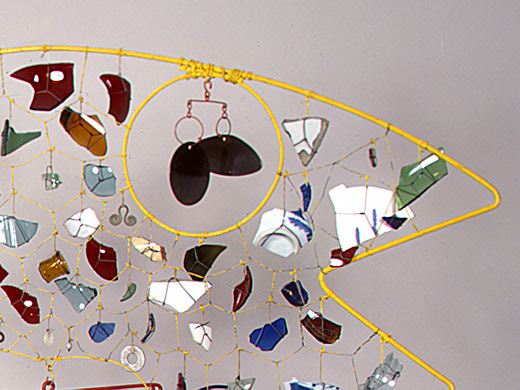 The artist described his mobiles as “four dimensional drawings” and I can see why: this fish has an integral sense of flat line and strong design and yet exists so totally in the round. It’s a clever tension and one that draws attention to the space it’s in, sparking musings about natural habitat and wonderful wildlife. Which are important thoughts for us to be having about a fish.