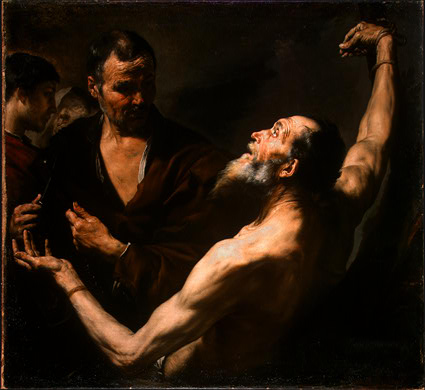 I met my first Bart through one of my brothers, who introduced me to the spike-haired, high-voiced cartoon character that’s so ingrained on all brains. My second Bart was a bit of an oddball, a boy in another brother’s class, who I recall once rubbed a burger across his face. Neither of these crazy characters could come close to the big Bart that’s beaming down from the altar wall of the Sistine Chapel: in the titanic scene of the Last Judgement there, St Bartholomew appears perched on a cloud, clasping the loosed husk of his own skin as well as the sharp tip with which it was removed. Michelangelo, the master responsible, painted his self-portrait in the molten pelt. 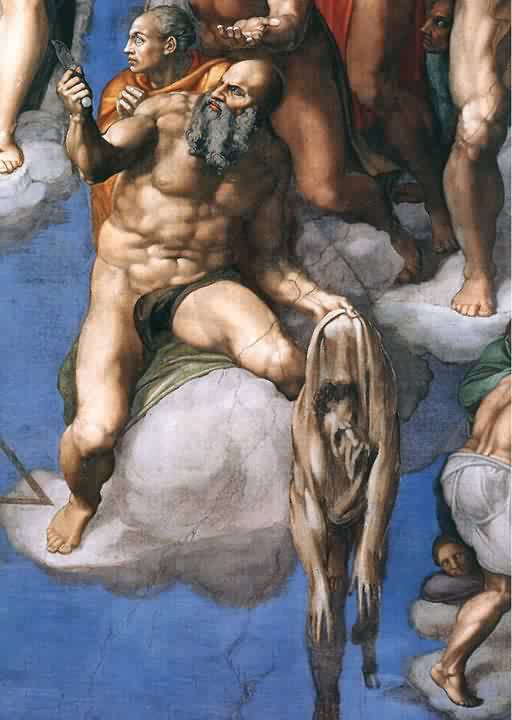 See what I mean? That Bart is hard to beat, but the NGA is giving him a good run for his money with their Martyrdom of Saint Bartholomew (1634) by the Spanish artist Jusepe de Ribera. This is honestly one of the most breathtaking works I’ve written about thus far on Art 2010, and we’ll look at it today because yesterday was the feast of St Bartholomew.

Let’s start with the man behind the martyrdom. Born to a shoemaker, Ribera (1591 – 1652) settled in Italy at a young age (first sited in Parma in 1611), and then spent most of his career in Naples, where he became the leading artist of his generation. People labelled him Lo Spagnoletto (little Spaniard) after the country of his birth, and it just so happened that at the time Naples was under Spanish rule, so much of his output was shipped off home. 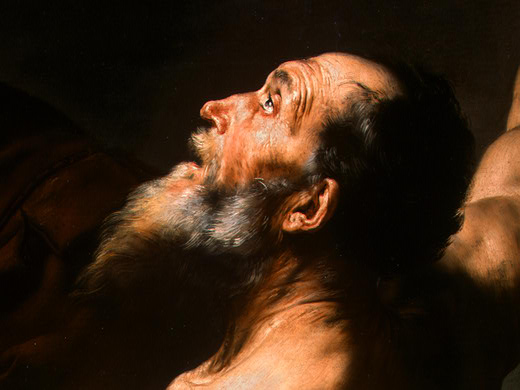 Religious works were a Ribera mainstay, and this subject in particular was popular in the climate of Counter-Reformation Italy and Spain. This shows the final moments before apostle Bartholomew’s death by flaying. We’re literally on Bartholomew’s side, slapped into the heart of the drama as he spread-eagles his arms left and right. Ribera is a master of drama, of scenes of unsubtle forcefulness: let’s take a breath to see how he does it in terms of his style. Basically, this boils down to a blend of sharp Spanish realism and intense chiaroscuro (light/ shade) effects, the latter adopted from Caravaggio. Ribera had been in Rome in 1615, where he came into contact with the Caravaggisti, artists working in the style of Caravaggio (the master himself had died in 1610). So it’s lifelikeness and light that give this picture it’s awesome power: see how crisp, clean light catches the saint’s profile (piercing eyes, jagged nose, open mouth) and how it highlights his petitioning left hand. Light also calls attention to the instruments of imminent torture, which are symbolically held in the shape of the cross. 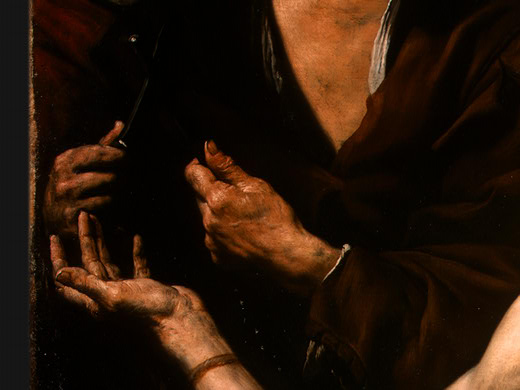 The gaze, the gestures and the whole feel of this work are infused with Bartholomew’s faith, which is so strong that it seems to transfix the executioner and halt him in his actions. More than that, the killer’s hatched brow and half-lit face hint at incipient doubt, and possible conversion (the light that illuminates both men could be seen as divine resplendence). Unlike a Caravaggio, this work is enlivened across its surface by a variety of brushstrokes and textures, which whip the thing into greater psychological potency. It makes my top ten at the NGA. 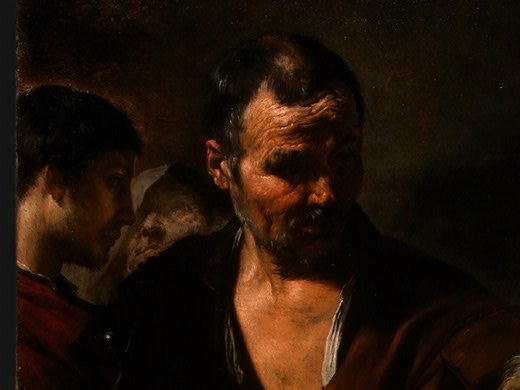