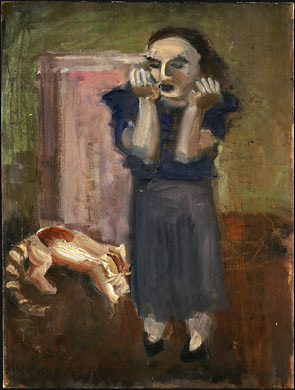 Oh my! The claws were out in ferocious force last week when I was in England. During my trip, a very odd thing happened, that was caught on CCTV and then posted online. I wonder whether the “Cat Woman” scandal has slipped across to the States though, so just in case, I’ll fill you in. Mary Bale is a greying, unmarried, 45-year-old bank cashier from Coventry who once sang in a church choir. So far, so spinster. But this isn’t the proverbial tale of a lonely lady living with lots of cats for company, all wee on her carpets and scratched-up furniture. On the contrary, Bale is being lambasted as a new national hate figure for trashing a tabby cat called Lola: she put it in a wheelie bin, where it was trapped for 15 hours. See the disturbing footage for yourselves:

This trapped-tabbycat tale is going to need two paintings for proper pondering. First we’re with the Russian-born Mark Rothko (1903 – 1970) and an early work by him called Woman and Cat (1933). It’s such an exciting painting, because it shows us Rothko right after he started painting (in 1926), before he was seduced by Surrealist idiom and much before the thing we now know him for, those huge abstract pictures of horizontal bands of color with muzzy edges. So this pic paints a picture of what people are citing as the dark and deranged side of Cat Woman. I’d say it is very expressionist, and I think what’s being expressed is the woman’s distress. Her colors incline to the dark and dank and the rough features of her face fall into a closed-off, consternated look. She’s alone (Bale is a “reclusive and solitary figure” according to her neighbours) and raises her arms in what might be self-defense or fear (people talk about Bale being frustrated and powerless in her life). It all feels so uneasy: Rothko radiates repression and rancor. On top of that the gloom-addled interior (dark floor, murky walls, all rendered with fat, angry strokes) reflect Cat Woman’s current confinement: Facebook hate groups were mobilised in moments and she has a police guard outside her house, after death threats started coming in. Bale is off work too, due to stress, and may be prosecuted by the RSPCA (Royal Society for the Prevention of Cruelty to Animals). 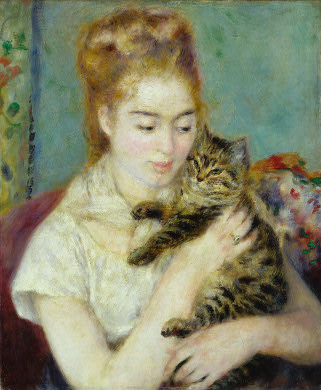 But now from one tail to another, and something a little lighter from Pierre-Auguste Renoir (1841 – 1919). This is his Woman with a Cat (c. 1875) an altogether more tame take on human-animal relations. Who doesn’t adore a bit of Renoir, the artist so famed for his brushy, lushy scenes of French life? This picture catches him on the cusp of the big time, already showing the softness of stroke and the delicacy of color that would seal his fortune. Renoir said, “… it is not enough for a painter to be a clever craftsman; he must love to caress his canvas too…” and here he does just that, across the skin and hair of the woman and over the tufty fur of the animal. I selected this to consider another side of Bale, the side that says she’s a cat lover who once even owned one as a pet. “I cannot explain why I did this” she has said: “it is completely out of character and I certainly did not intend to cause any distress to Lola.” It’s all very weird and frankly unfathomable. But for now, if we can judge by the creamy whip of Rothko’s cat and the contented face of Renoir’s feline, Lola the little kitty is the one who will come out of all this unscathed.

A huge hello to all my new friends at The Ensworth School in Nashville: great to have you join Art 2010. If there’s anything you would like me to write about, let me know!

4 thoughts on “Paws for Thought”