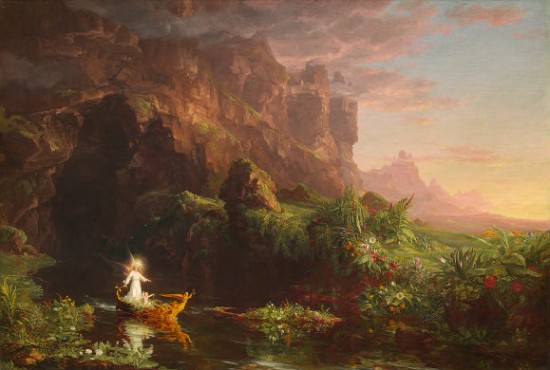 At what age do you think it is that birthdays bring with them more than the pleasant promises of cake, ice-cream, balloons, bouncy castles and lots of presents? When does that nasty aftertaste take hold, the one that reminds you that yes, there might be friends, family and fabulous festivity, but they all come with a little label in clear handwriting: hip hip hooray! you are a year older! I reckon it might be right around the time you’re already allowed to do everything legally, so no need to nick another notch into your personal timeline.

Well, if there ever was a painting (or, rather, series of paintings) that does away with any allure in ageing, I’ve found it at the NGA. In fact, there’s no getting away from them, hung as they are just of the East Garden Court in a small square room, one picture per wall. Welcome to the story of your life, dear reader, recounted in slightly terrifying terms. The Voyage of Life (1842) is a famed four-part series by the American painter Thomas Cole, following a man (everyman, I suppose) along the river of life. So far so cheesy. But if you think this is an all’s well that ends well tale, then sit tight.

We begin with Childhood (seen at the top), in which a bouncing babe sits flinging his arms up towards a pretty pastel sky. His wooden boat is whittled with wonderful carvings, while lush and opulent plant life explodes both in his barge and along the banks of the river. The water is calm and he’s overlooked by a lovely-looking angel figure. Next comes Youth. Here our man is seen striving to take hold of his destiny: he’s alone in his boat and reaches a wedding-cake-like-looking castle in the sky, emblematic of all the things one wishes for when young (a boyfriend, a girlfriend, fame, fortune, a fast car, a fabulous dress). All still looks to be under control, though is that the angel leaving his side? And I’m sure there were more flowers in amongst all those leaves before… 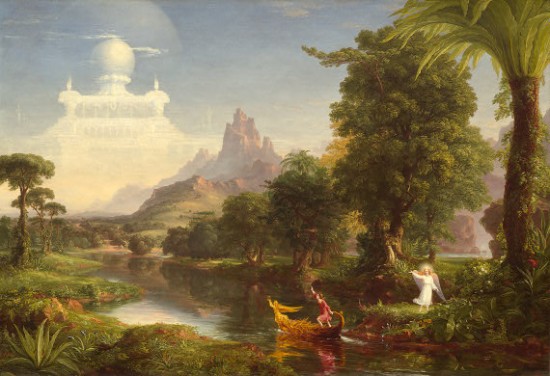 On to the next and it’s Manhood now. The traveller is still mostly on track, though it does look a little like things have taken a turn for the worse. The stream has deviated and is directing us towards some turbulent, rapid-like reaches. The boat looks less sturdy, rocks abound and there’s nought but a gnarled, leafless tree off to the right. And as for the angel? Still there, but sitting on a cloud now. Very far away. 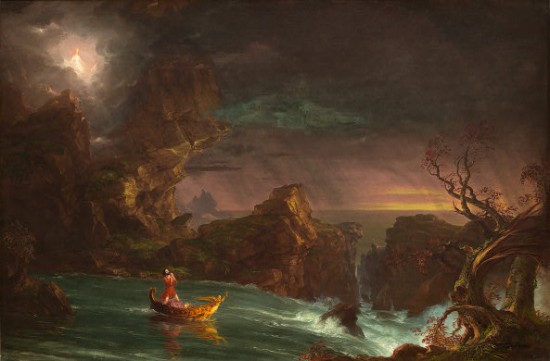 Old Age couldn’t come quick enough after all that, and thank goodness things have settled slightly. The man is white-haired and weathered but there’s calm and a come-hither call from up above. Oh wait, from heaven. 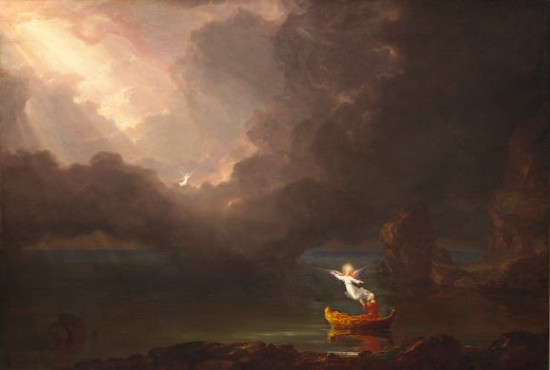 Thomas Cole (1801 – 1848) was born and brought up in the industrialized north of England before emigrating to the US at age 17 with his family. He’s famed for his landscapes of American wildernesses as well as two series of allegorical paintings, including The Voyage of life. Whether we read into this a Christian doctrine or a personification of America itself, it’s an unsettling sort of thing to look at. I find myself thinking about which picture most applies to my stage in life. Surely it can’t be all doom and gloom in the middle years of one’s earthly tenure? A state only abated by the onset of old age? If that’s the case Cole, then thanks for the warning. I’m putting the kibosh on birthdays for me, from here on in.

Happy Birthday Husband, for tomorrow. And also B, H and YO. Join my birthday embargo, if you like…