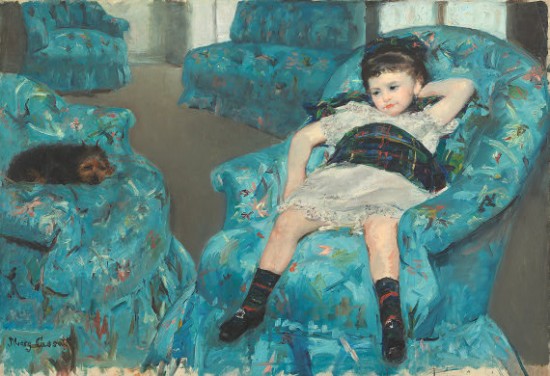 Humpf. Mum’s in the kitchen, preparing tea, and has told me ten times to get out from under her legs. Dad’s in the garden chopping wood before the guests get here. Brother never wants to play with me and sister only wants to toy with her hair and try on clothes. Even the dog’s asleep.

That feeling of fed-up, flung-on-this-armchair boredom flecks this fab picture, called Little Girl in a Blue Armchair (1878). She’s all dressed up, with nowhere to go and nothing to do. The artist, Cassatt, clearly has excellent observation: the subject’s star-shaped sprawl is as unselfconscious and natural as we’d expect from a little lady who hasn’t been hemmed in by manners and making-yourself-presentable. She personifies frustration and fidget.

Cassatt is a captivating painter of children. In fact, for months I’d needed to know the artist behind a puff-cheeked, pouty-lipped little cutie-pie who appears in a print in her grey pinafore on the way-in to one of the restrooms in the West Building. I should have known that that oversized straw hat and handful of sticking-out-like-straw hair come to us (of course!) from Cassatt. 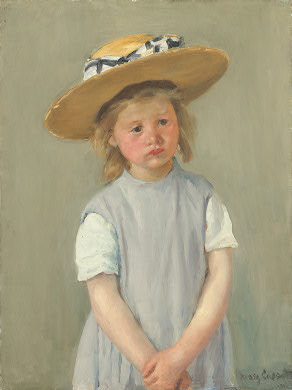 The American painter and printmaker Mary Cassatt (1844 – 1926) settled in Paris in 1874, the year the first Impressionist exhibition took place. This is significant since she’d bind her art path to theirs in big part: Cassatt met the influential painter Edgar Degas in 1877 and, through him, became a member of the Impressionists. Later, Cassatt (who came from a well-connected family) would aid the Impressionists’ cause by finding American buyers for their works. Cassatt painted above all domestic pictures, of mothers and children, but don’t let the potential twee of her subject matter put you off. Cos Cassatt is one modern madame. Take our little girl and the blue furniture, for instance, which, aside from the obvious energy emanating from that electrifying blue, is addled with alluring asymmetry and daring design.

It was at the urging of Degas that Cassatt collected and carefully studied Japanese prints, and the pull of their jangled patterns and off-kilter compositions was great, as this picture presents. Our girl is off-center, which is interesting inasmuch as she’s the subject of the picture. The chairs and couch are cropped confidently at the edges, zooming us into the scene and giving a cutting-edge kind of feel. The furnitures too help to fashion, in their arrangement, an odd and enchanting patch of grey on the floor, up front and flat, like a pattern on a print. Also Japanese is the jaunty way the things in the picture are pitched forward and tilted towards us. Add to that the catching color and the thrust of her brush and I can see why the Impressionists coddled Cassatt. Unlike them though is the pleasingly firm feel of Cassatts forms, which seem immune to the eroding factors of light and shade. They shine, and we understand they’re 3D, but they’re put before us as big, fat and flat.

I’m enchanted by this picture of old-fashioned kid boredom, evocative of a slow Sunday afternoon. It’s filled somehow with latent energy: because (as the adage goes) “only boring people are bored” and I can’t help but think that sooner or later little girl will leap up and do something. So Cassatt has captured something quite incredible here: the tick and fizz of a young imagination.