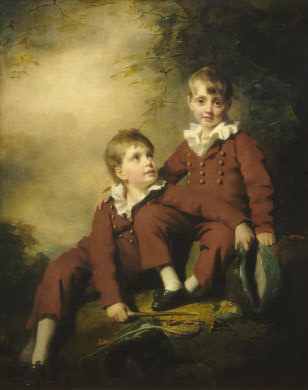 “… being an only child has made me stronger in every way, except emotionally.” So says Sonia Hully, founder of lovedefinitely, a sophisticated site that takes a refreshing approach to finding ‘the one’. It might strike as an apposite career choice for someone like Hully, who has it that being an only child has made her a needy adult who’s insecure about relationships and wants always to be surrounded by people. She says: “it’s rare to find an only child who says they liked being alone.”

I can’t comment on whether Hully’s experience chimes with that of other single children (I myself am one of five), but I am interested in the fact that for her, being the one and only has shaped her positively (as well as negatively): “without siblings to share my feelings with, I thought for myself and learnt to rely on my own logic. I gained independence and matured quickly… I realized being childish was irresponsible, and am now confident about making my own decisions.” She says being an entrepreneur was a natural choice for her, seeing as she works well alone.

Who knows whether the sibling set-up we are exposed to as youngsters has any long-lasting impact on who we become. All I’ll say is it’s interesting sibling dynamics that spring to mind whenever I see this painting at the NGA. It’s called The Binning Children and dates to c. 1811. It’s by one Henry Raeburn (1765 – 1823), the leading Scottish portraitist of his day. Based mainly in his native Edinburgh (he did consider moving to London at one point but feared the competition from Thomas Lawrence, the most gifted and successful portrait painter of his generation), Raeburn was in constant demand. He painted many scientists, philosophers and scholars of the Scottish Enlightenment. In this case, David Monro Binning from Perthshire commissioned a double portrait of his sons. His lads look smart in identical get-ups: maroon-brown suits sewn with rows of bright buttons, ruffled collars at their necks and fur-trimmed hats to complete the look. Their coordinated outfits remind of one of those styled family shots that sits on top of the piano. 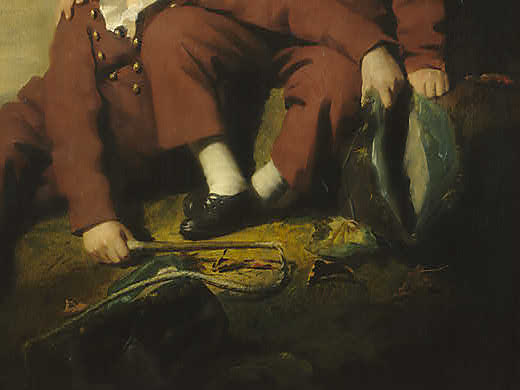 But stilted this is not and that’s all thanks to the artist. The faces of the boys are set along an easy diagonal (highlighted by the blonde hair and white collars). From that double focal point tumble forth their bodies, all interlocking limbs and incredible brotherly naturalness. Raeburn was celebrated as a magician when it came to conjuring up on canvas the true essence and character of his sitters: his ace abracadabra here is to call forth not just two boys, but the unique quality of their inter-relationship. George (we think) is the elder, the one on the left. The littler one is unrecorded. One looks up and the other looks out and suddenly, we’re invited into an intimate and enchanting sibling set. So bonded are the brothers that I think it’s fair to say that, in this case, one Binning boy just wouldn’t work. 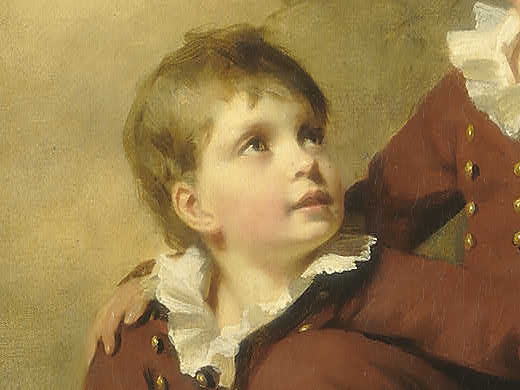 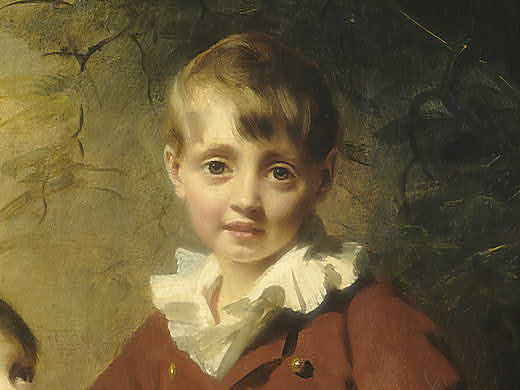 Raeburn was probably self-taught as an artist, so he obviously had innate ability in his bones. You can sense his freedom and confidence here: in the background areas he’s used his “square touch”: free brushwork without under-drawing to hatch in energetically the sky and leaves. When it comes to faces and figures though, the brush slows to a smooth fluency and the paint to a creamy consistency so that the boys and their brotherhood are brought to believable life. 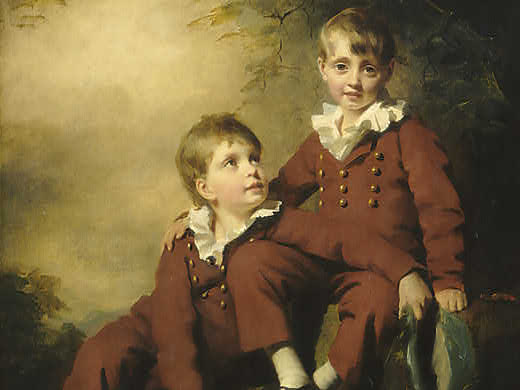