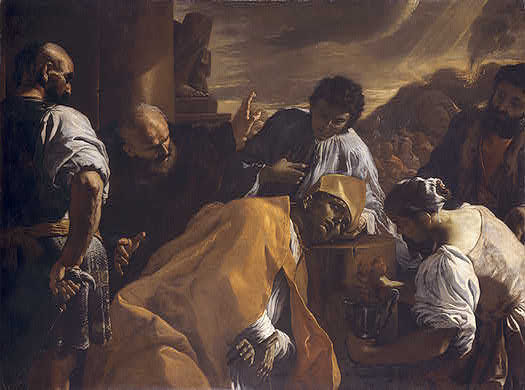 From yesterday’s profane to something altogether more sacred today, with the official feast of Saint Januarius. I first met this most mythical of saints in Naples, which makes sense since he’s the patron saint of that city. San Gennaro (as he’s known in Italian) is honored by the faithful there three times a year in the cathedral, as they wait to witness the liquefaction of his blood stored in two precious vials.

San Gennaro is a huge deal in Italy, but it’s not as if he’s going unnoticed here: had any of you heard of the mega, madcap celebrations that go on for him in New York City each year? 2010 is the 84th Annual Feast of San Gennaro, the longest-running and most revered religious outdoor festival in the States. It’s been banging since September 16 and ends today, stampeding all through the streets of Little Italy. This is the area of lower Manhattan that served as the first home in America for hundreds of thousands of Italian immigrants who came here seeking to improve their lives beginning in the early part of the 20th century, so it’s frankly heartening to see that they carted their best bud Gennaro across the Atlantic with them.

Today’s painting The Martyrdom of Saint Gennaro (c. 1685) is by the Italian painter Mattia Preti (1613 – 1699), also known as Il Cavaliere Calabrese (the knight from Calabria, where he was from). Based in Rome around the 1630s, Preti had already passed through Naples, Venice and Emilia on his own artistic odyssey, finding influence and inspiration along the way. From 1656 – 1660 he was in Naples, and it was in this time that he absorbed tastes and traces of Caravaggio, the artist whose spirit and style seeped so significantly into every artistic pore there.

Caravaggio is a man of drama and intense tonal effects and we see Preti in that same vein here. He’s chosen a critical moment, seconds before the death of the saint. Gennaro was bishop of Naples c.300 but was arrested for his Christian faith: being eaten by wild beasts was not an option (the Romans feared a blaze of public disturbance), so instead he was beheaded behind near a volcanic crater.

Either side, the figures split into a wide V around the swooning saint, a compositional decision made (maybe) to stress the imminent split of the neck. An excellent idea to have the faces of the persecutors obscured by downward angle and general darkness: they remain unintelligible and menacing while our energies stay with the saint, whose features are seeable, though stilled. Hands abound, highlighted, each one active in some aspect of the terrible task (save for those of the saint, which are bony and bound).

Tonal modelling is the thing that ramps up the atmosphere an extra notch: shade seems to melt over the faces and figures, the darkness at the painting’s edges threatening to swallow a terrible scene. Just visible in the murky middle-ground is a broken statue: a pair of truncated legs adding unbearable poignancy. And that sputtering crater in the very distance? I can’t help but think Preti is bringing in some allusive gore..

Preti’s picture plants us right there at the death of this Italian saint, lest we forget his sacrifice and heart. Though, judging from what I’ve seen in Naples, and the evident scale of festivities in New York, there’s no risk of Gennaro slipping from any self-respecting Italian’s mind any time soon.