It’s official: sometimes you can’t believe your eyes. Take this eye-and-brain-boggling image created by Edward Adelson from the Massachusetts Institute of Technology. 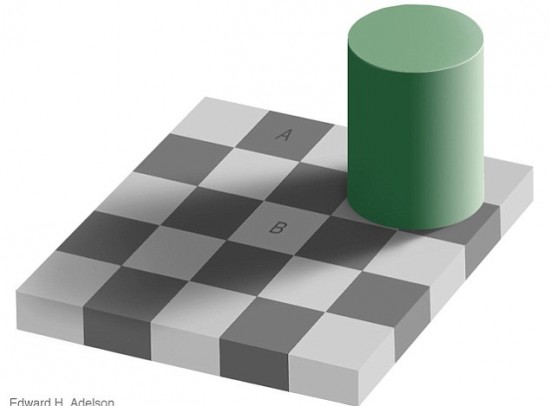 You might not believe it, but the squares marked A and B are actually the same shade of grey. I know! Here’s how: our eyes and brain are constantly gauging the color of things around us and, in doing so, automatically compensate for shadows. B is in the shadow of the cylinder, while A is not. Our eyes and brain see that the two squares are the same shade of grey, but then think “Hang on… if a square in a shadow reflects the same amount of light as a square outside of the shadow, then in reality it must be a lighter shade of grey.” Then our brain alters our perception of the image so that it corresponds with what it thinks is there in the real world. Mad. 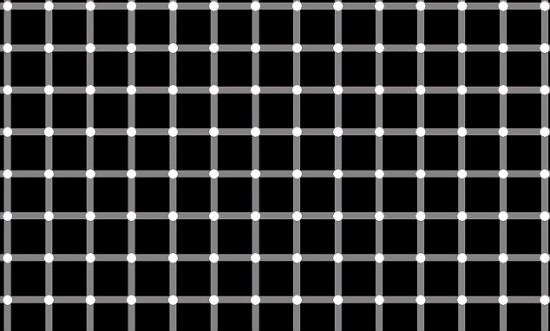 This second illusion has the effect that, as you move your eyes around the image, dark dots quickly appear and disappear at the intersections. But if you look directly on any intersection, the dark dots vanish. Oddly but immediately, this grid reminded me of a painting I’d just seen at the NGA, called Random Overtone Piece (1977).

Edda Renouf is not someone I’d heard of before but I know the basics about her now. She’s an American, born in Mexico City (1943) who moved to the US to study in the early 1960s. She settled in New York City in 1968 to pursue an MFA at Columbia University, where she studied under an abstract expressionist painter. Renouf lived and worked in New York until 1991, when she moved to France.

Renouf’s painting appears to adhere to a particular and career-spanning character. She has a spindled, serene and subtle language. She works a lot in acrylic on linen and sometimes introduces a threading technique: either adding strands or taking them away to create a fine handled, hatched effect.

I didn’t know to look out for threads, so am not sure whether she used them in Random Overtone Piece, but I did deduce a dotted and lined effect. It’s grid-like (in a delicate way) and started wreaking havoc on my perception very quickly. More ocular and cerebral bafflement comes from the fact that the “background” is dense and monochrome. I am, frankly, impressed: from a painting that looked unpromising at first flowed a good few minutes of eye and mind buzzing, as both aimed to assemble some sense in the object perceived. Just not sure I believe them, is all.