There’s nothing like sitting down at a dinner party and finding yourself wedged in between an MD and an NGO for making you feel you’ve supped a little too much of the selfish syrup. Or if your friends tell you they’re foregoing their Sunday morning lie-ins to volunteer at the local youth club. Instantly, the fact that you bagged that last pair of fabulous knee-high boots on sale or have just set up a personal gym at home don’t seem so conversation-worthy. Instead you seem just a smidge (whisper it) unserious.

It’s a modern malaise, the feeling that a lot of people are doing a lot of selfless and significant things, and it’s hitting us hard after years of city-excess, celebrity nonsense and corrupt career politicians. It’s chiming too with our times of tightened belts and purse strings. So it is that social awareness is becoming all the rage: a ticket to a live TED workshop (in which politicians, pop stars and big brains address global issues) is golden; Nike has seen fit to start a Foundation that enhances the lives and prospects of teenage girls in the developing world.

Gestures can be less grand too: little things done in the course of a day all add up in the face of social and environmental issues. So that’s the idea here: dipping our toes into the waters of change. This is The Bather (1846/1848) by the Frenchman Jean-François Millet (1814 – 1875). It’s a work that catches him at a crucial time in his life: he’d started with history and portrait pictures (modest success) but is about to move (post the 1848 Revolution) to a village called Barbizon in the forest of Fontainebleau. That move caused a sea-change in Millet, as he started to inject his work with social and political conscience.

This bather might not look like anything special or even controversial, but she does show the stirrings of what would become Millet’s major contribution to art as a Realist painter: a break with traditions of the past and offering up honest images of everyday life. He’s now best known for his paintings of peasants on a previously unseen scale, which gave stage to the hardship of modern working conditions. 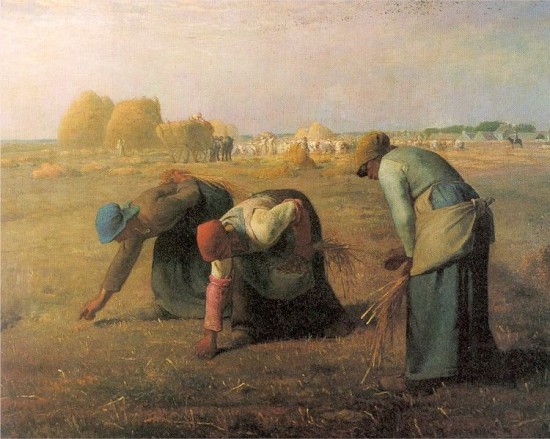 So here I see the rugged and honest style that Millet made his own. It’s there in the sweeping brush strokes and the tawny palette.

It’s there in the up close look at an ordinary activity. And it’s also there in the bather’s sharp inhale as the chill water hits her skin: Millet is painting the shock of the new, in subject and style. He might just be testing the waters right now, but he’s about to dip deeper into his social conscience.