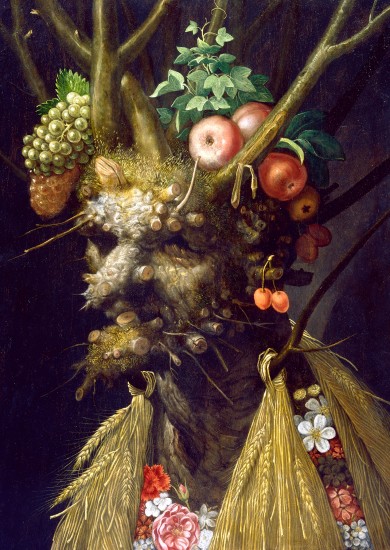 So I woke this morning with a streaming nose and a little bit of a banging head. The banging in part is attributed to the birthday cocktails I consumed last night, but the rest is all autumn settling in for a first fall-flu visit. Don’t get me wrong – I adore the change of seasons. Seeing buds popping pretty pastel patterns on barren branches. Watching the earth exhale as summer’s full reach of lush and leafed green holds sway in the sun. My favorite is the delicate turn to reds, oranges and gold at this time of year, before the chill and snap of sparkling winter sets in.

See, I’m a fan of the seasons, just not so much the assorted health hazards that go with them (hay fever, insect stings, sunburn, frostbite, flu). I love the yearly cycle, just not my own cycle to the CVS pharmacy to deal with my latest seasonal disorder. Does anyone else feel the same? If so, this one’s for you: some awesome Arcimboldo. Oh I did do a little dance when I spotted that the NGA has recently acquired one of his works, because this Italian artist (c.1527 – 1593) is like the cool/ quirky kid that everyone wants to hang with at school. 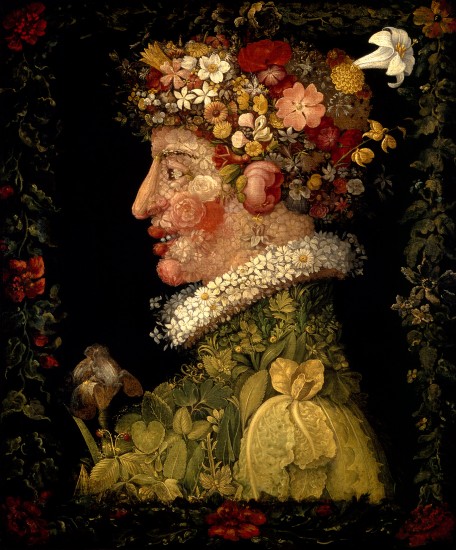 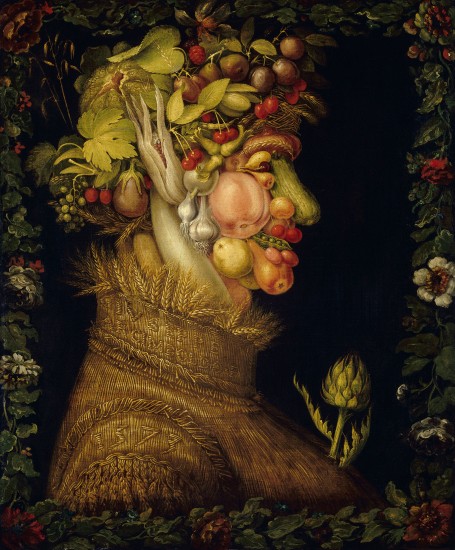 Giuseppe Arcimboldo got a big popularity boost when the Surrealists discovered his crazy portraits in the 20th century. Following a somewhat conventional start in art, it was after his arrival at the Viennese court of the Holy Roman Emperor Ferdinand I that Arcimboldo’s work took a turn for the strange. It was here that he started using fruits, flowers, vegetables, anything to form the likenesses of human heads. The wit and weirdness of these portraits proved hugely popular with the Emperor and his successors. 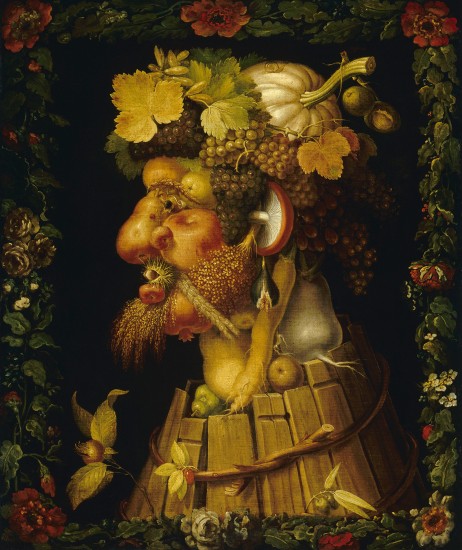 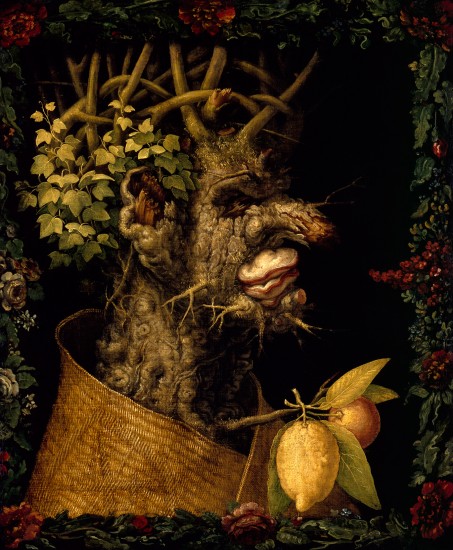 The NGA’s new head is a quadruple whammy called Four Seasons in One Head (c. 1589-1591) seen at the top and here below.  It’s oil on panel and really rather brilliant. Surging branches spike horn-like off the head, cradling pink and red apples, bunches of grapes and green ivy leaves in their midst. Stubby sticks pick out the nose and jawline, while moss tickles the pate and chin. I love the cherries dangling, a little drag-like, on the ear and also the summer sheaths of corn that hang in downward tassels. Underneath it all is an eclectic floral tunic of sorts.

A head like this might have been intended as satirical or allegorical, or maybe both. But in any case it’s a strangely addictive thing to look at, and ridiculously clever. With spring, summer, autumn and winter references all in one place, it’s a head choc-full of seasons, alright. And here I was thinking I had it bad with a small bout of October sniffles.

The exhibition Arcimboldo: Nature and Fantasy is on at the NGA now.

One thought on “Au Naturel”