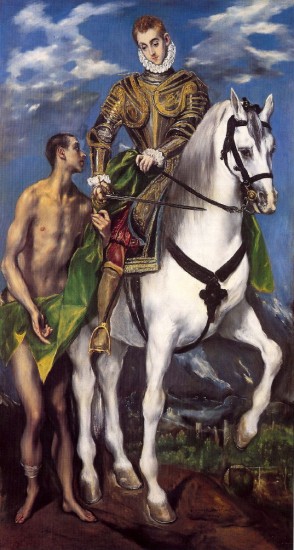 How highly do you prize your new winter duffel in that caramel camel color that’s been oozing off the runways? Or the cape that’s a little bit Sherlock Holmes and a lot Shirley Temple? How inseparable are you from that sparkling shawl that goes with everything and hides a multitude of post-dessert potbellies? These are the things I’m thinking today as part of the Orthodox Church celebrates St Martin of Tours, the man who spliced his own expensive military cloak clean in two to share it with a shivering beggar.

Martin (my estimation of the macho-ness of this name has rocketed since I re-read this story), lived in the 4th century, in the time of  Constantine the Great. He served as a soldier in the imperial army and it was when he was at the gate of Amiens in Gaul that this famous incident happened. He didn’t think twice before halving his outer wear with the ill-clad man.

Now, this is a pretty good story as the saintly ones go. You’ve a dashing soldier astride a steed and a knee-weakening act of generosity. It’s a popular picture in the annals of art but I do think El Greco handles it best: he’s never afraid to amp up the glam and glitz. El Greco (1541 – 1614) is the Cretan-born, Spain-settling artistic giant we looked at only a few days ago. Saint Martin and the Beggar (1597/1599) was commissioned for the Chapel of San José in Toledo by Martín Ramírez, a namesake of the saint and donor of the chapel. El Greco sees his saint as a blonde and fine-featured young man, bedecked in sliding gilded armor and a stiff white ruff. His horse is a monolith of animal whiteness with a sooty mane and subtle-sensual shading over chest and legs. The crucial cloak shimmers jade green and warm gold, folding sharply in an arc from the left of the image to the right, eye-catching in the extreme, lest we underestimate its unifying, equalizing potential. 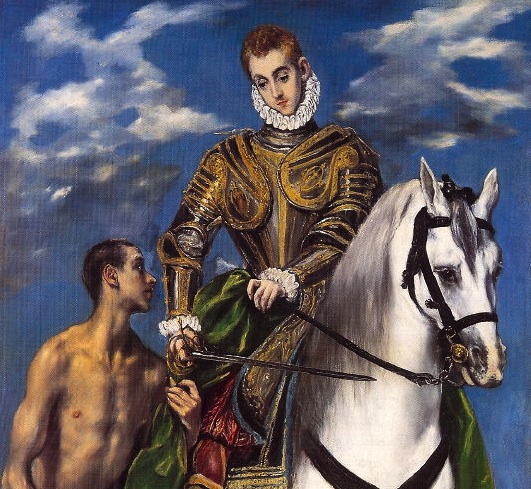 What’s interesting is that for once El Greco keeps his attenuating tendencies in check, in places: the saint’s body is humanly proportioned (remember the stretched out-ness of St Jerome?), to contrast with the more elongated form of the begging man. How clever: is this an intuitive allusion to the spiritual dimension of this meeting? You see, that night, Martin dreamed of Jesus wearing the half-cloak he’d donated, and heard him say “here is Martin, the Roman soldier who is not baptized: he has clad me.” I reckon he’d definitely have been due a double saint’s day, had he given the beggar the whole kit and caboodle. 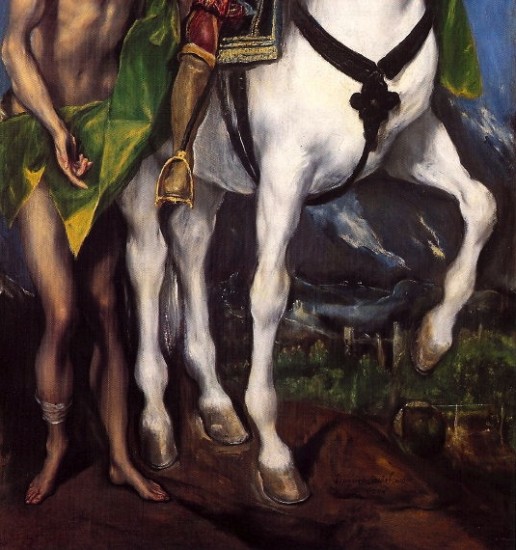 2 thoughts on “Beggars and Choosers”