When I was 14 I had a history assignment on Christopher Columbus, for which I was to imagine myself on the Santa Maria, setting sail with the man in 1492. I became quite animated about my fictional foray across the Atlantic Ocean and set about delineating all kinds of detail. I was manning the crow’s nest on the mast and contracted a bitter bout of scurvy mid-way (“I ache for a segment of orange” was the memorable line, I believe). I described the cramped sleeping quarters (hemp hammocks, bad body odors), dull daily duties (scrubbing a splintering deck) and my emotions on the trip (excitement at the prospect of a new world, missing mum at home).

This task, I think it’s clear, opened up all my precocious pre-proper-teen writing tendencies. The teacher’s instinct though was spot on, since he had us signing up for this most significant sail in a personal and particular way. So much so that years later on Columbus Day here in the States I’m still seeing myself straight back on the Santa Maria.

This painting at the NGA shows our man on the cusp of his game-changing journey. This is Christopher Columbus and His Son at La Rábida (1838), which has him in a state of exasperated pennilessness just before his personal breakthrough. Columbus and son are in the monastery where, according to all the exciting accounts, he received word that his eventual patron Queen Isabella wanted to meet him.

This is by Eugène Delacroix (1798 – 1863) the leading figure of the French Romantic movement, who must just have rubbed his hands in glee at the very thought of painting Columbus. You see, the lone hero, a-buzz with passion, yet whose talent is tortured for following a problematic path to greatness, was the ultimate poster-person for Romanticism.

I’m fascinated that Delacroix is far from his typical modus operandi here: he’s not using his usual loud colors or lavish forms. Instead the composition is ruler-regular (broad geometric walls and curved arches, a parade of straight-edged pictures down one side, the bulked-out bodies of the monks). Colors are played down to the point of pale indifference: browns, beiges and blah-blah shades are alleviated only by the scarlet plume on Columbus’s hat. The son’s flaccid slump on the bench seems to steep the entire scene in lethargy.

But this is part of a pair: Columbus before King Ferdinand and Isabella (March 1493, return from America), in the Toledo Museum of Art, Ohio has the more standard hallmarks of Delacroix dynamism: 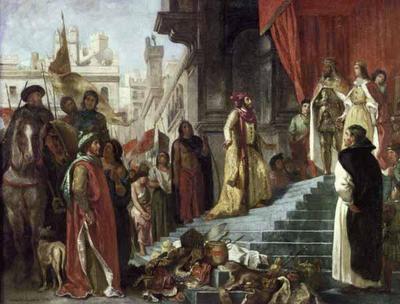 Together, with their stylistic differences, these two tell the pre/post-victory tale in no uncertain terms… and look closely to spot the scurvy-suffering sailor in the crowd.

One thought on “Spinning a Yarn”