This red sludge story is the stuff of nightmares: imagine the sight of a huge swathe of toxic waste sweeping towards your home. The initial rupture of the waste-storage reservoir at an alumina plant in Hungary let loose an estimated 35 million cubic feet of industrial waste. The flood flushed through fields and streets, causing seven deaths to date and culling wildlife. When it flowed into the Danube last week, the threat to countries liked Croatia and Serbia that sit along the waterway increased. Now Hungary’s minister for the environment has said that a greater problem looms: the breach of the reservoir’s northern wall is apparently “inevitable” and will occur within a day or a week. 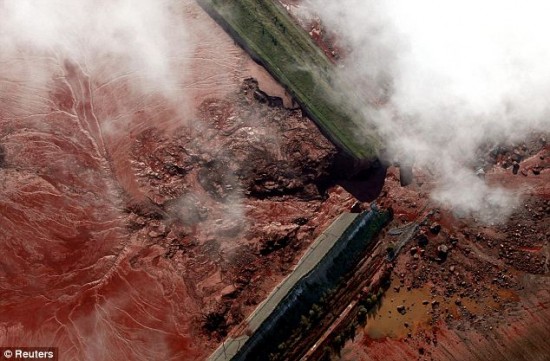 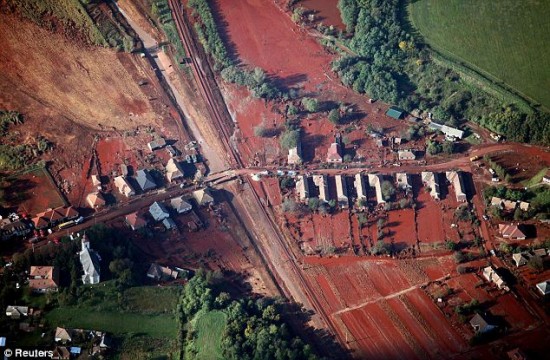 This has been the country’s worst environmental disaster and images of the scene are alarming in their dirty redness and insidious seepage. I wasn’t sure whether I wanted to write about the reservoir rupture, but found the insistent redness of today’s painting hard to ignore.

This is Essex and Hester (Red) painted in 1958 by Grace Hartigan. She was an American born in Newark in 1922 (she died in 2008) and was I suppose what you’d call a second-generation Abstract Expressionist. Hartigan hung around with the movers and shakers of the New York art scene in the 1940s and 50s before moving to Baltimore, Maryland in the 1960s.

This work surely shows the salient influence of Abstract Expressionism. It’s there in the way she works the oil across the canvas, in heavy gestural jerks and movements: the brushstroke is a painterly as you’d please, a force of effect to be reckoned with. It’s there too in the eye-blaring brightness of the colors of red, green, blue and orange with blotched black.

But then again, I don’t think Hartigan was as inward-looking as some of the Abstract Expressionists (think Jackson Pollock, Mark Rothko) and so never broke entirely with the figurative tradition. Instead, she turned her attention to the glint and glimmer of contemporary life: some of her paintings (especially later ones) incorporate images taken from coloring books, film, traditional paintings, store windows and advertising. In fact, if anyone has an idea or inkling as to a possible source for Essex and Hester, please share! I can’t shake the feeling that there’s factual or figural referencing going on here.

One critic once described Hartigan’s work as “tensely personal” and d’you know I think that’s just about right:  it is dense and tense and pumping with palpable energy. It never fails to send a shock and shudder my way when I see it, because for me it feels like the most visceral reaction to a troubling external reality.