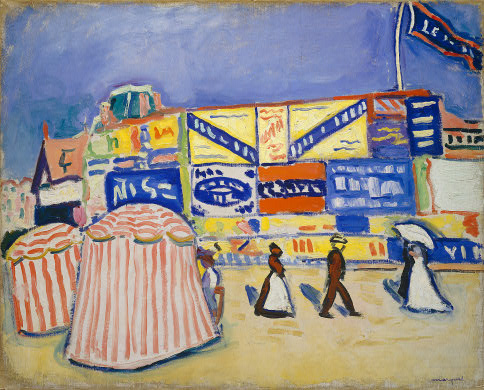 A name-change is a game-change: trust someone who’s recently manipulated her monicker to denote an updated social set-up. But even I in my now-hyphenated-state couldn’t have predicted the social network cyclone surrounding the Gap name-change. Not that Gap changed their name as such, they just unveiled a new logo (“a more contemporary, modern expression”) late last week, to tie in with a cross-company modernization-move.

The on-line loathing and lash-back were so instant and so spectacular that Gap was galvanized into quickly changing tack, offering fans the chance to submit their own logo design. Within days though the message was modified yet again: “We only want what’s best for the brand and our customers. So instead of crowd-sourcing, we’re bringing back the Blue Box tonight” said their Facebook page.

Was it all planned from the start? I only mention it because Gap has been frustrated by flailing sales and this logo interlude launched one hot and messy pot of publicity (always the best kind). And because their people were so prompt to re-package the uproar as a sign of nations-wide attachment to their decades-old white-on-navy blue logo. 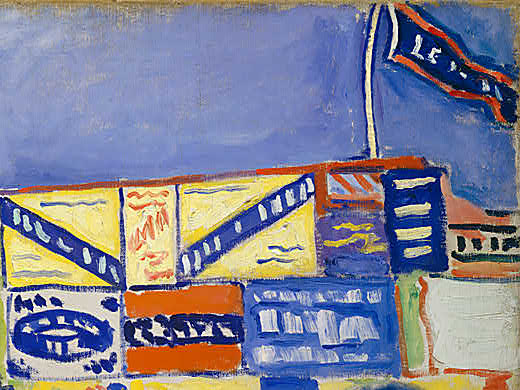 There’s a buoyant bit of blatant branding at the NGA that’s been brought to my mind by all of this: Posters at Trouville (1906) is by Albert Marquet, a new name for me, which made this extra fun. He hangs with Derain and de Vlamick in the East Building and certainly Marquet (1875 – 1947) does much to slot himself with them into the Fauvism file. 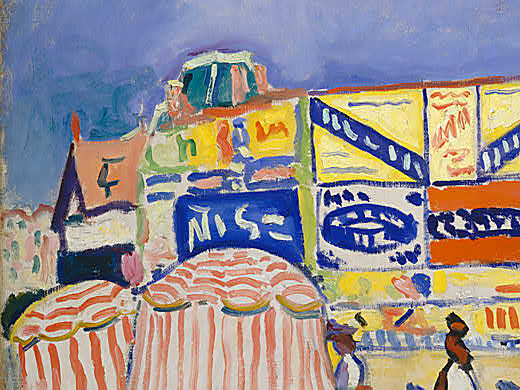 For a start there’s that jewel-bright color palette, the fulcrum of the Fauve aesthetic: in the ads alone, blues, yellows and cherry reds appear. Marquet moved to Paris in 1890 to study and met Matisse (the founder of Fauvism) not long after. Their tie remained tight: years later Marquet would make one of Matisse’s studios his own. Strong and saturated colors were a staple in Marquet’s art pretty early on, but they were definitely defined further by Fauvism proper (the movement itself lasted only three years, from 1905 to 1907). 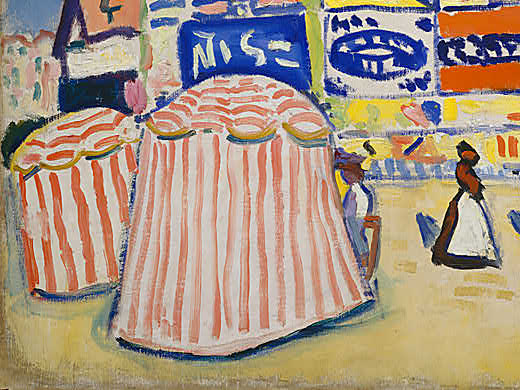 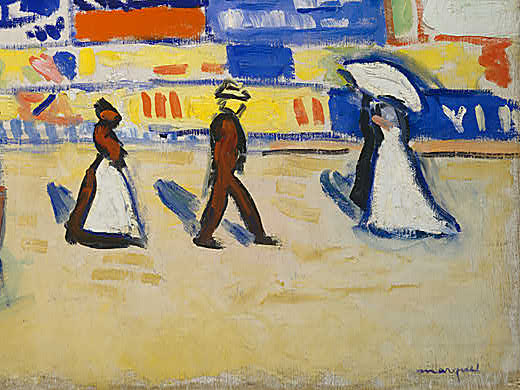 But for all the fierce and free color here, it’s not fully non-naturalistic (that is, the colors are not used in a way that’s entirely independent from the objects they describe). Instead the tents, attire and billboards stick (albeit loosely) to descriptive representation. Also, there’s something like a light source (smudging blue shadows along the ground) and the contours are pretty emphatic all round. Marquet must be a faux-Fauve, because I think he actually sits stylistically somewhere between Impressionism and Fauvism, peddling a hybrid that’s hard to define. And even harder to name.

One thought on “Mind the GAP”