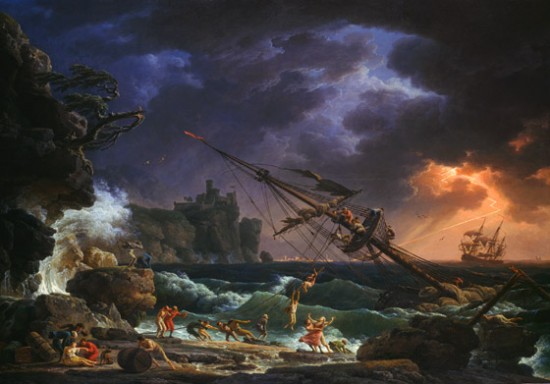 I’m afraid to admit I have a few phobias. Dark water with the likelihood of big-bodied fish shimmying beneath? That’s one. A school exam to sit and me not being prepared? Still haunts me. Driving, just generally. Not having enough PG tips tea bags in the house, that’s a new one. Also under our roof we have a full-blown clown phobia and an aversion to loading the dishwasher…

Apparently there are five infamous phobias that affect a lot of us a lot of the time. Such as the certainty that that spider you spy will jump off its spot right onto you. Or the belief that a crazy person will push you onto live train tracks. Plane engines giving out is a frequent fear, as is an elevator break and crash-down. The final entry on the list of five top frights is our paranoia that we’ll be struck by lightning, so here to bring fear of the frazzle into full-blown, cinematic technicolor is The Shipwreck from 1722. There’s the hot orange shard of electricity in the distance, ripping across the sky and scaring all and sundry in that distant seaside town. 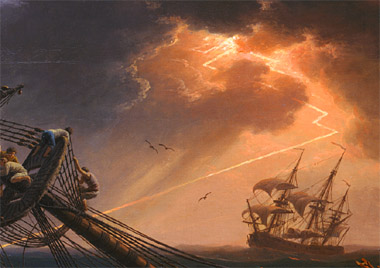 This comes courtesy of the French artist Claude Joseph Vernet (1714 – 1789) whose specialties were twofold: if he wasn’t working on action-packed storming seascapes like this, usually with a tipping vessel in distress, he’d be painting bustling harbor scenes, bathed in soft light. 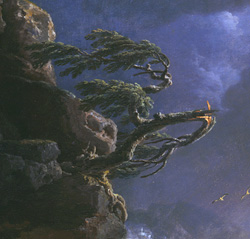 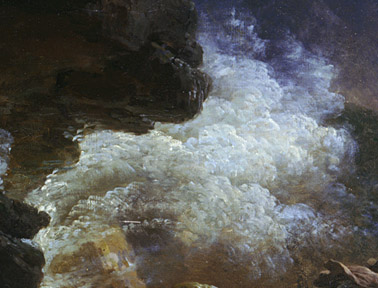 Vernet is a breath – make that a blast – of fresh air. His colors are intensely luminous and his brushwork is barely restrained. Here he constructs a crackling composition around a series of striking lines: the ship’s mast is on a dangerous diagonal that angles at a rag-tag tree. From there, our eyes swoop down along the crashing wave and cragged rocks to the painful details of human distress (a half-drowned woman lolls to the side, men slide down a rope in hopes of fettering the ship to shore), before it’s up to the crow’s nest we go. And it’s the lightning that points its guiding arrow right into the heart of all this action. 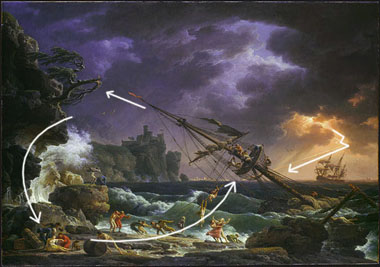 Vernet was immensely popular, winning royal commissions in his time and becoming the head of an artistic dynasty (both his son and grandson followed him into the trade). Perhaps people loved how he tapped into the life and real-life-ness of nature (he’s reputed to have had himself bound to ship masts in wild weather, so that he could get a better taste of a storm at sea). For me, the way we respond to a shipwreck of his suggests some frisson of excitement in facing our fears and phobias… just as long as that lightning stays well on the wall. 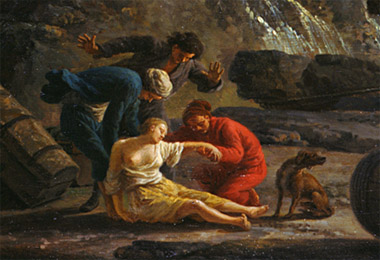 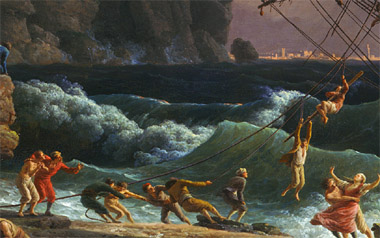 3 thoughts on “Struck by Lightning”