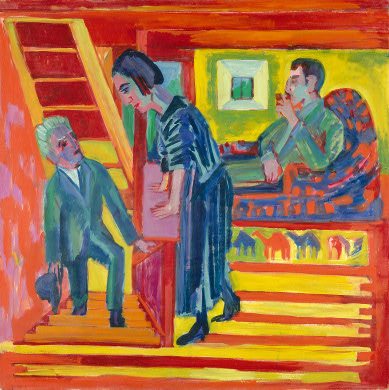 I’m reading a collection of short stories at the moment that I’m having a hard time putting down. That’s partly down to the genre: bite-size morsels of natty narrative are easily snatched between breakfast, lunch and dinner. But it’s also to do with the lurid, lucid, crazy-laced quality of these stories. At first I was plain put off by the tales, finding them steeped a touch too deep in horror or fantasy or oddness. But then it hit me: things that appear even a little surreal do a good job of illuminating our lives. Granted, fantasy can distort, mask or even hide reality, but it can also show us the world we (think) we know in a way that makes us realize we’ve never really looked at it closely.

This is the revelation that I brought to bear when considering this crazy painting at the NGA. It’s called The Visit – Couple and Newcomer and was painted in 1922 by Ernst Ludwig Kirchner (1880 – 1938). A German, Kirchner’s art was at the center of German Expressionism, a movement that pretty well erupted from the constraints of the classical ideals of the academies and the rapidly-aging Art Nouveau in the early 20th century. 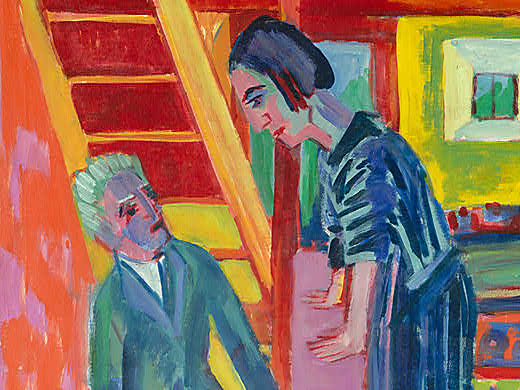 This canvas has carrier bags-full of appeal: could there be a more wild and wacky confection than this? It’s like being hit in the head by a zanily-colored carnival float.  Kirchner is known for distributing color confidently: here he has candy-striped floors in bright orange and blaring yellow, echoed in the beams on the ceiling and the ladder leading up. Elsewhere blocks of blue map out a man or patches of purple paint in a shadow. He makes no bones about challenging conservative tastes. Just as confident as his colors is his composition, in which space is denied but pattern becomes paramount. 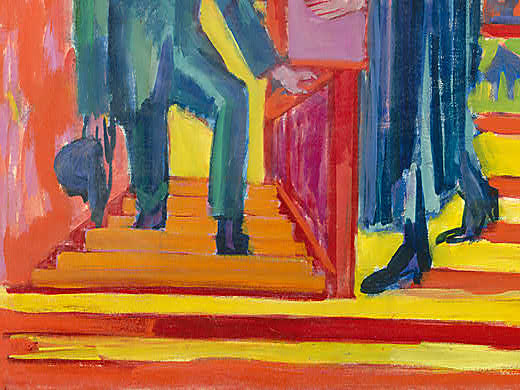 The visual edginess of Kirchner’s surface effects sits well with what I see as a weirdness in the subject he’s portrayed. It’s called The Visit – Couple and Newcomer and really what more juicy lead-in could there be? Instantly I’m asking myself “what happened next” as I ruminate over inter-relations, motivations, her interest, his newness and the eery indifference of the man behind. Just like all the best short stories, Kirchner ensnares the spectator with his opening line. 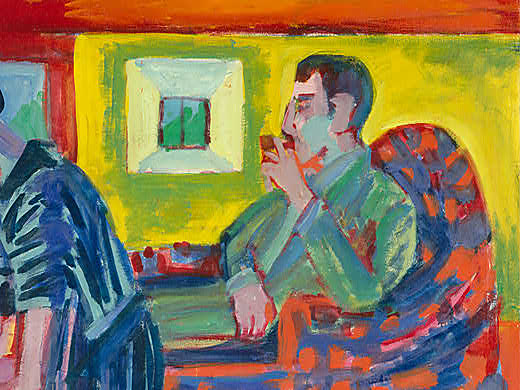 Expressionist art is distinguished by its emphasis on the highly personal response of the artist to the subject, rather than the subject itself. And this sort of off-kilter view from Kirchner is exactly the thing that has us looking at the real world with more cleansed and more keen eyes.