Mirror, mirror on the wall.. who is the fairest of them all? Well it’d better be us girls, going by the latest looking-glass statistics. UK research has just revealed that an average woman spends a full five days in front of the mirror each year. And in some parts of the country (hello Liverpool) ladies are clocking their reflections more than 70 times a day. Clearly, this mug-gazing is not just about avoiding major visage malfunctions (spinach stuck in the teeth, hair sticking up on end): millions struggle to stay away from a shiny surface for more than 30 minutes at a time. 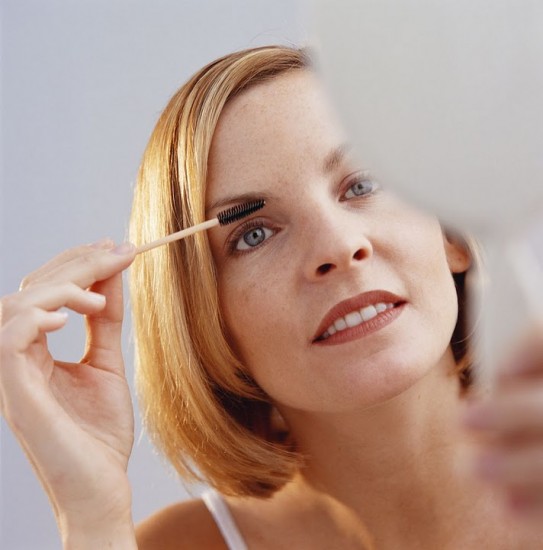 So what are we doing during all this quality face-time? Make up, is what. British women use enough lipstick each day to draw a line from London to New York (on average we reapply it 11 times a day), on top of 880 gallons (4,000 litres) of foundation and more than 16 million sweeps of the mascara wand. It’s enough to clog the pores and eyelashes just thinking about all that slap.

Staying with the thoroughly self-conscious theme, let’s take a long hard look at Woman with a Mirror (1929) by Fernand Léger (1881 – 1955). In broad terms, Frenchman Léger used his art to create a vision of the future, often taking the objects and materials of modern life as his subject, and the relationship of humans with certain things as his theme. So it strikes me as perspicacious that here he has us contemplating a woman contemplating herself. It’s as if he’s taken a crystal ball and spotted the self-obsession and image preoccupation of future years, perhaps already latent in his day.

The son of Normandy farmers, Léger trained as an architect’s draughtsman before moving to Paris in 1903 to study art. He started off using the language of Cubism and I swear I can still see some play with prismatic forms and multiple viewpoints here. Lingering too are those mask-like, primitive features that Picasso pursued. There are traces too of tubism, in the disjointed, curvilinear forms coming through.

I like a lot the bold juxtaposition of colors and the rigid, racing lines across the back: as he matured, Léger adopted more and more the aesthetic of commercial art. I think this look worked well with his art, which from the 1920s came to comment on life in the modern city, in the midst of alien advancements and evolving environments. I do think I get a sense of sell or advertisement here which, when taken alongside her ashen complexion and melancholy gaze, makes for a somber and pensive portrait. Let this be a lesson for us ladies: perhaps we’d be happier looking in the looking glass just a little less.