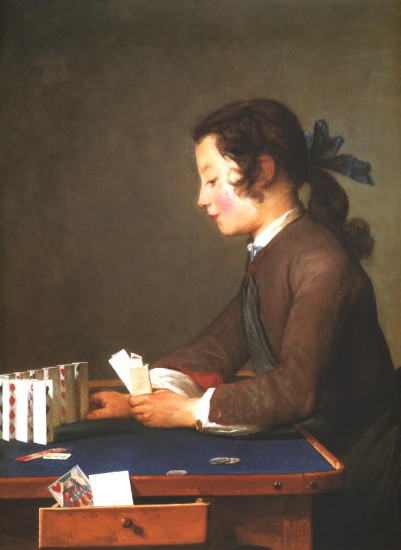 One of the reasons that Saturdays are so wonderful is that you suddenly have stretches of time for the things you can’t even think about doing during the week. Whether that’s knocking up a batch of biscuits in the kitchen or counting the times a squirrel scurries across the garden fence. One of our new neighbors loves nothing more than to consider his next concrete-laying project. It’s each to their own during those precious un-pressured hours.

I got to thinking about tinkering this week as I read about America’s National Toy Hall of Fame, the place to pick up inspiration for Saturday pottering. Their all-star archive includes such all-time classics as the bicycle, kite, teddy bear, stick and cardboard box (a bit odd, the last two, but add imagination and you’ll be on your way). The latest addition to their toy line-up is playing cards, truly a tool for hours of absorption and amusement. And here to lend visual clout to the card argument is The House of Cards (1737) by Jean Siméon Chardin.

Here we have a boy (his apron suggests he’s a household servant called to clear and clean up after a gaming or gambling party), who’s become distracted mid-task. He’s using the cards (folded for some reason) to build a delicate structure of sorts. The lad’s intense focus on his building project sets the tone for the entire picture: this sort of sober domestic scene is exactly what we come to expect from Chardin (1699 – 1779), whose restrained images make a striking contrast to the wilder excesses of the Rococo style, flourishing in France at the time.

Chardin was largely self-taught, which makes me marvel at the magic he conjures up here all the more. There’s a sublime stability in the composition of the shot, which uses a broad-based triangle to freeze this flash-in-the-pan instant. I think the colors he’s gone for are inspired: a characteristic Chardin palette of earthy brown-grey tones enlivened by the swathe of bright white cards and injected here and there by a bright flash of red on rosy lips, ruddy cheeks and hearts and diamonds playing cards. By intensifying the glare of light on the face and hands of the boy, we focus on his focus and the precariousness of his placement of hand.

There might be a somber moral being made clear here, about the idleness and vanity of worldly constructions. There’s even a Jack of Hearts card (i.e. rascals, cads) peeking from the drawer at the front. But whatever. This looks like a truly lovely way to while away an afternoon to me.

One thought on “Trump Card”