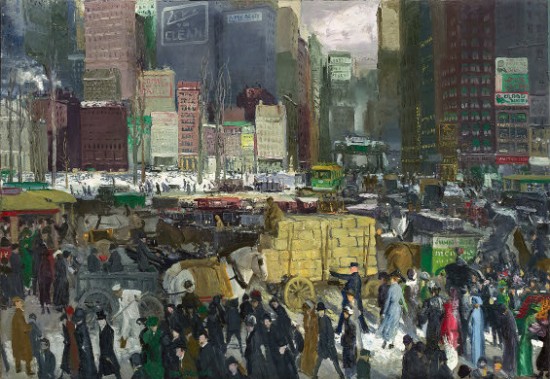 Last week I went to a conference at the NGA, the focus of which was education for today and tomorrow, with a specific slant on how we learn in and through the arts. One session stood out for me, in which for an hour and a half we took in two paintings by George Bellows (1882 – 1925). Our instructor said that on average a visitor spends just four seconds planted before a painting, so the idea here was to slow ourselves down and see what we could see in just two scenes.

The exercise started with us looking at New York (1911) and jotting down five nouns (half the group) or verbs (the other half). Object words tumbled forth first (bricks, buildings, busses, bales) followed by more abstract concepts such as cold, crush, rush and urbanity. Phase two was to bring adjectives to the table so again we looked deep for ideas: muted, disconnected, vague, linear and thick were all words that people produced from their personal perspectives on the picture.

At this stage the instructor introduced the comparison image, The Lone Tenement, painted two years earlier. Such a stark contrast had us overflowing with new nouns (sun, ship, fence, fire), verbs (shine, shiver, huddle, struggle) and adjectives (bright, cream, spacious, serene). Placing our little gallery seats plumb in the middle between the two images, we were tasked with a partner to come up with contrasting pairs of words or phrases (natural – unnatural, calm – rushed, dark – light). 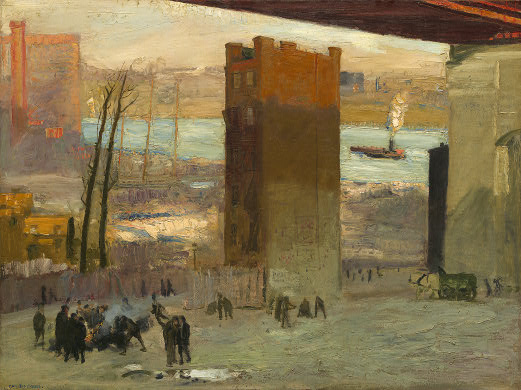 All of this looking and language work was a bit of a revelation: it lasted literally for an hour an a quarter and not once did it feel like we were straining and wringing stuff from a dry source. But then it got even better. Five members of the group had to produce a short sentence related to one or both paintings (“The traffic was terrible on that cold February morning…”), which we took as a starting-point for our own story paragraph on the pictures. It was at that moment, when I pushed my mind into gear and put pen to paper, that I felt an engagement with a painting I’ll never forget. And that’s impressive since before this session, I don’t think I’d have spent even four seconds with either work:

“There was my girl I spotted in the crowd, the one I see most mornings. She’s got on her blue coat like always and her hair all piled up and pretty. She’s rushing in the midst of all those people, all that pushing and pulling of the crowd. I don’t know where she’s coming from or where she goes on those quick little legs of hers… but today for the first time she turned and looked right at me.”