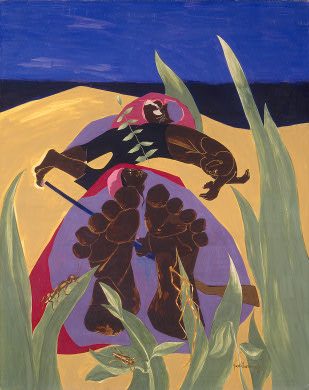 I once read that the key to the power of people-persuasion is the curveball. As in, when faced with a person who isn’t receptive to what you’re saying, throw a curveball into the conversation. It seems that going on a tangent, or offering some unique unexpected angle on a situation can be the way forward and through a communication impasse. I adore art that persuades with a visual curveball, jolting us upright and making us take proper notice in the process. In the case of Daybreak – A Time to Rest (1967) it’s an enormous pair of hugely disproportioned feet, sitting padded and fat, flush with the picture plane.

The feet are the point-blank focal point here, asking us to step up for up-close consideration. Thin but insistent lines etch across the soles’ surface, scratching out toes, balls and a matrix of creases. From first look the question crops insistently up: so who do these feet belong to? 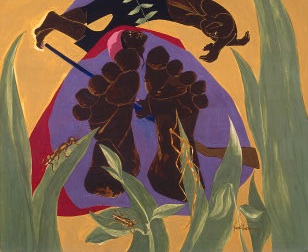 Daybreak – A Time to Rest tells one stage in the story of Harriet Tubman (c. 1820–1913), the famed African-American woman who freed slaves using a network of safe houses called the Underground Railroad. It’s by Jacob Lawrence (1917 – 2000) an artist who stuck throughout his career to his campaign to physicalize in paint struggles faced by African Americans. Here he has Tubman prostate, with a rifle in the crook of one arm. Behind her sprawl the couple with their baby she’s saving. It’s an ardently abstracted image, made up of schematized shapes, jarring colors and a flat-as-a-pancake picture plane.

Growing up in Harlem during the Depression, Lawrence was exposed to an active cultural energy. The federal government’s Works Progress Administration (WPA) in Harlem  offered some initial training before he studied at the American Artists School in New York. In the late 1930s Lawrence worked in the Federal Arts Project before he had his first solo exhibition in 1944, at New York’s Museum of Modern Art.

Lawrence works within a distinct idiom that fuses American school of social realism and the Mexican muralist tradition. That translates into the abstraction we see but also into an acute ability to spotlight a person, a moment or a particular feeling. Here I’m intrigued by the three insects that thrum and hum at the start of a new day. And the fact that Tubman’s upward-looking face is placed like a pin-point near the centre of the scene, settled on a swaddle of purple. All in, it’s eery and enchanting eulogy to one step taken in the journey of African American experience in this country. Or indeed many steps, if those feet are anything to go by.

One thought on “Feet First”